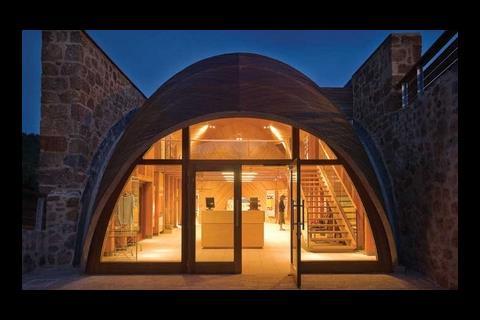 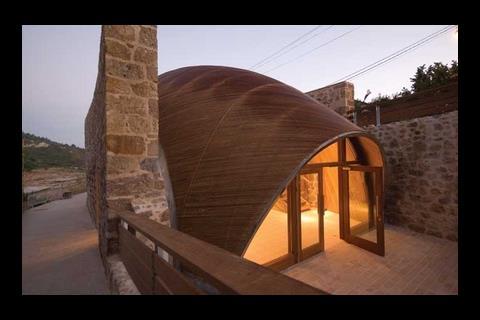 The visitor centre is sandwiched between the heavy walls of an ld salt store. 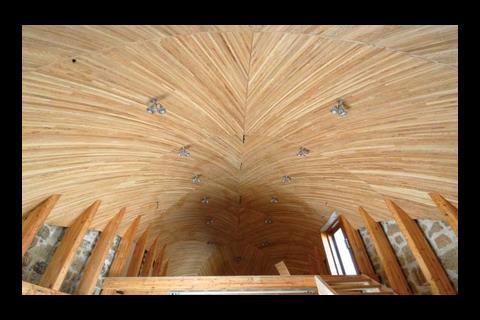 It has a glulam frame clad with American ash, which creates a light interior and is intended to make visitors feel as though they are inside the hull of a ship

Unusually, the inspiration for this striking little building was a homemade wooden canoe. Its Spanish architect, Mikel Landa, decided he wanted to build a kayak in his spare time. “It was something personal,” he says. “I built a kayak in my garage at home over two years in my evenings and weekends. It taught me a lot about working with wood. When I finished it I thought it would be interesting to use this form of construction in a building.”

His chance came when his practice Landa-Ochandiano Arquitectos was asked to design a visitor centre for the Añana salt valley near Bilbao in northern Spain. Salt has been extracted from saline springs since 822AD and the area is being regenerated and turned into a tourist attraction. Landa wanted a building that would act as a landmark for the saltworks. “It had to be something distinctive that people could easily see and feel at ease with once they were inside,” he says. “The round shape was right for both these reasons.”

Landa built his kayak using strips of American ash, which is flexible and easily bent to shape. These were glued together around a mould. Once all the strips were fixed together it was covered in a clear resin to make it waterproof and the mould was removed. For the building, a shell-type structure was not possible because of the scale, so it has a frame made from 14 glulam ribs.

The building is constructed between the walls of an old salt store. Landa says he particularly likes the juxtaposition of heavy rectilinear walls of the old and the organic curves of the new. A wall was removed so visitors could enter and leave the building at one end.

The visitor centre is entirely self-supporting. The only link with its surroundings is the stainless steel flashing that forms a waterproof join between the old and new buildings.

The ash is fixed to both sides of the glulam ribs and the gap in the middle is insulated. Like the kayak, the outer layer of ash is painted with a liquid waterproof coating. To make the building look as natural as possible, a further layer of a naturally water-resistant hardwood called ipe has been fixed to the outside of the building. This will weather to a silvery-grey colour, rather like an old boat that has been left upside down on a beach.

Original print headline - One hull of a building