Building’s Projects of the Year 2019

A pioneering new breed of council housing, a waste plant that doubles as a ski slope and a super-smart student centre users can learn from – Ike Ijeh looks back at the architectural gems of the year 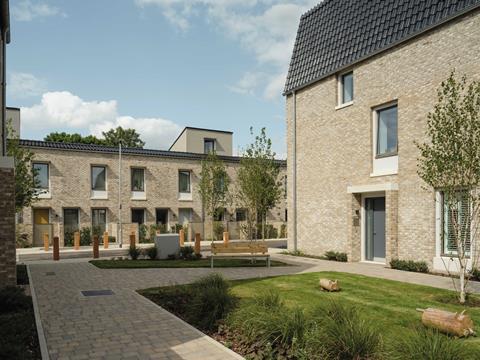 Goldsmith Street has announced the barnstorming return of council housing into British political, civic and urban life. Even before winning the RIBA Stirling prize in October, the Norwich scheme had already helped to redefine how we perceive social housing – and the architectural and environmental values we ascribe to it.

For, as well as a pioneering example of low-income residential development, Goldsmith Street is also the largest Passivhaus-certified public housing scheme ever built in the UK. It consolidates its environmental credentials within a subtle yet crisp architectural palette rooted in the traditional design values of place, context, materiality, streetscape and roofscape, bleeding into adjacent conservation areas like a neat, high-performance contemporary twin. Standout elements include the efficiency of internal house layouts, which feature under-stair circulation space that doubles as a study and an enlightened public realm strategy that convinced the local council to allow narrow 14m-wide streets to foster a sense of community, intimacy and enclosure. Equally, the commitment to secure an individual ground-floor front entrance for as many residents as possible, even those living in upper-level flats, and subtle details such as letterboxes being embedded into brick fence piers rather than front doors, where they might have compromised thermal performance, have struck a chord with many.

Goldsmith Street has had a victorious year – it was overall winner at the 2019 Housing Design Awards in July and took the housing category in Building Design’s Architect of the Year Awards in May. And its confident reinvention of the council house format will inevitably continue to wield a significant impact on Britain’s residential landscape for many years to come. 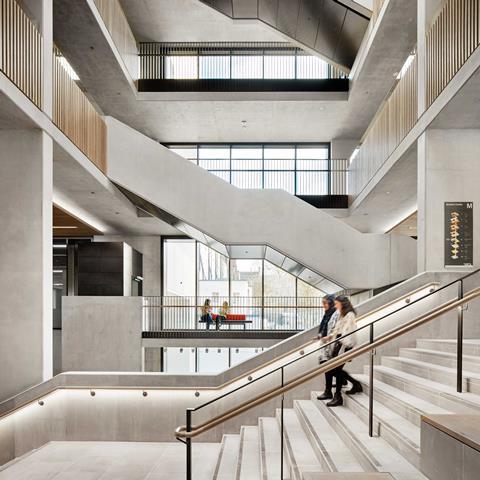 For millennia, architecture has been the process of defining a use for a building then constructing it to fit that use. But what if the buildings could tell us what those uses should be? What if we could learn from them and they could inform us what the briefs and future uses should be?

This is the fascinating technological premise behind the newest addition to UCL’s sprawling Bloomsbury campus. The new UCL Student Centre does not just set a benchmark for 21st-century universities; it does so for 21st-century buildings too. The facility is part of a contemporary breed of student-only social and study facilities, in some ways building on the success of O’Donnell + Tuomey’s Stirling prize-nominated Saw Swee Hock Student Centre at the nearby LSE. At UCL, a whole range of study, social, pastoral and recreational facilities have been provided, but the emphasis is on offering as many different or mixed-study modes as possible. So, among the 1,000 study spaces, there is provision for traditional quiet-room study, digital workspace study, single cubby-hole study, soundproofed “cabin” study, group study, library study, study areas in circulation spaces and informal spaces dotted around the building that form a hybrid between social and study spaces. Additionally, the centre is open 24 hours a day to respond to the alternative study hours students are likely to keep.

But the real ingenuity in this scheme comes with the sensors discreetly embedded into almost two-thirds of the building’s total study spaces. These feed live information to an associated app that gives students and teachers real-time information about building occupancy levels in the same way a digital entrance board might indicate how many spaces are left in a car park. In so doing, the building becomes a dynamic tool so managers can learn how it is used and better equip it to satisfy those uses. The UCL Student Centre looks forward to a more responsive and reciprocal digital relationship with our buildings. 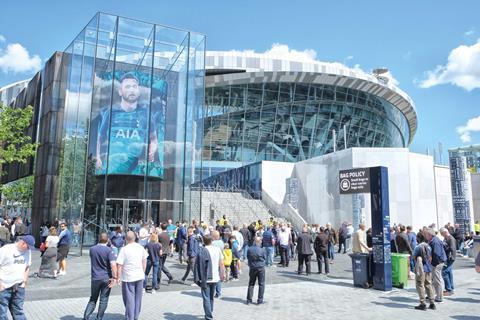 Tottenham’s new stadium was initially set to open in September 2018, in time for the start of that year’s Premier League football season, but a succession of problems with critical safety systems caused by faulty electrical wiring led to a much-publicised eight-month delay. There was also speculation that the original price tag of £400m more than doubled. Yet, when it did finally open just before Easter this year, construction and football punditry were generally wowed by one of Europe’s defining stadiums of the 21st century.

Designed by sports veterans Populous, the venue (right) is now London’s biggest Premier League stadium and has not only transformed its local area but has redefined the popular perception of what a modern football ground should be. The stadium is part of a wider regeneration scheme that will deliver housing, a school, a gym and a supermarket, and has already seen the restoration of retained listed buildings along the adjacent high road.

An extraordinary perforated and sculpted panelised steel facade wraps the building in a shimmering metallic veil, peeling upwards to reveal the vast, 262-tonne, 49m structural “trees” that support the stands and have foundations embedded 30m into the ground.

Additionally, not only does the stadium offer a spectator experience of uninterrupted sightlines and an array of refreshment amenities, it also incorporates advanced shared facilities that serve its role as the UK home of NFL American football. These include sophisticated technological innovations such as a retractable pitch design and separate custom-built locker rooms. The Tottenham stadium sets a high-tech benchmark for large-scale sporting venues anywhere in the world.

Considering Cambridge’s globally renowned academic reputation for theology, it may come as a surprise to some that the city previously had no purpose-built mosque and had made do with hastily converted residential and retail premises. That has changed as the city now proudly sports what claims to be the “greenest mosque in Europe”. Its environmental credentials are immediately apparent, with a deep portico comprising a row of fluid glulam piers that begin as shafts before sprouting gracefully into curved clusters of ribs that provide a noble arched screen for the entrance.

These timber “trees” are also a defining feature of the interior, appearing in both the foyer and the main 8m-high, 1,000-capacity prayer hall to help carve out a spectacular, ethereal space – the columns of the gridded structure appear to be springing into dance as they cast themselves towards the heavens. They “trees” act as a physical metaphor for the building’s spiritual and cultural intentions, symbolising the groves of trees traditionally ascribed to the Islamic gardens of paradise in Islamic theology, as well as a clever contemporary nod to the flowering arches and ribbed lierne vaulting of the gothic and perpendicular cathedrals of the English ecclesiastical tradition. 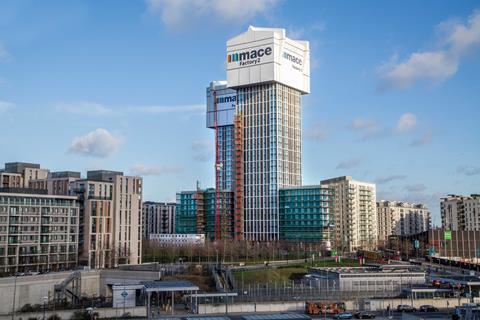 While innovation is as sought after in construction as in most other sectors, genuine, game-changing instances of new ideas remain relatively rare. But Victory Plaza is one of them. Visually, this pair of 26- and 29-storey residential towers in east London’s Queen Elizabeth Olympic Park look like any number of the legions of high-rise residential towers found across London. The difference is these were built using a method that has the potential to change the construction industry’s accepted methodology for how tall buildings are built.

Mace has invested in its new “jump factory” system (pictured while scheme was under construction), essentially a rapid construction system that allows one floor of a tower to be built every week within a waterproof fabric enclosure at the top of the tower. Twin walls, internal walls, columns, floor slabs and rebar reinforcement are constructed floor by floor. The factory is “jumped” up in 3.3m increments for the construction of each floor until the tower is complete.

The system relies almost entirely on offsite construction and modularisation and requires prefabricated elements ranging from building superstructure to heating, ventilation and cooling units to be slotted into the building using two gantry cranes within the factory tent. The enclosure also limits the noise and dust emitted from the construction site, a crucial concern when building with neighbours in close proximity.

Mace has refined the system on a second scheme for the same developer in the park. Launched as High Rise Solutions (HRS), this draws from a menu of components used to manufacture the structure and facade sub-assemblies offsite. Mace says HRS cuts time on site by 25%, vehicle movements by 40% and construction waste by 70%. 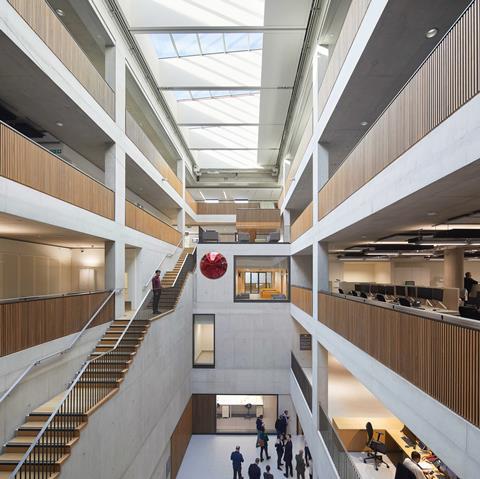 Despite being one of the most famous hospitals in the world, until this autumn Great Ormond Street was housed in a jumble of mainly Victorian buildings close to the British Museum. Its global medical renown had never been matched by a building with a unified and legible architectural presence. But this bold new extension, the first to be built opposite the island site the hospital has colonised over the past 167 years, changes that.

A crisply handsome and sculpturally elegant terracotta facade now overlooks the famous adjacent Coram’s Fields, its rhythms and proportions subtly inspired by the Georgian terraces that surround it. Maintaining the themes memorably espoused by its RIBA Stirling prize-winning Sainsbury Laboratory in Cambridge, in 2012, architect Stanton Williams has crafted a neatly detailed and socially-focused interior characterised by transparency and connectivity, discreetly displaying the work of scientists in a sunken cathedral-like laboratory overlooked by passers-by through large glass clerestory panels.

The most poignant element of the building is its use of art to soften and deinstitutionalise a building that, despite the uber-advanced nature of its work, must provide a warm and comforting environment for the smallest and most vulnerable members of society. This extension, which allows members of the public to peek into its laboratories, is a real celebration of vital scientific research so often hidden from view. 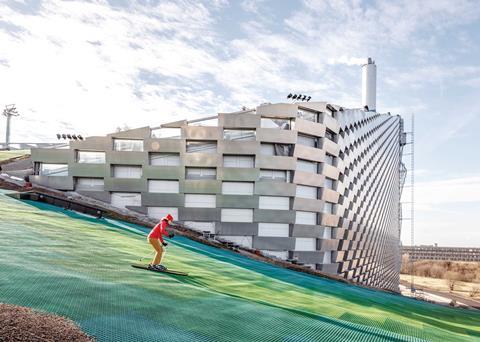 What’s unusual about a power station having a ski slope on top of it? If Danish architectural maestro Bjarke Ingels manages to set a trend, absolutely nothing.

Copenhill is an epoch-defining project that sees a 490m artificial ski-slope and landscaped park placed on the sloping roof of a 41,000m² waste-to-energy plant. Costing almost half a billion pounds, the long-awaited scheme has been dogged by a crippling series of delays and technical problems. But, like Tottenham Hotspur’s ground, controversy can evaporate in the face of a successful opening and now it is fully operational, Copenhill’s extraordinary combination of uses has taken centre stage.

Burning up to 400,000 tonnes of waste per year and producing enough electricity to power 60,000 homes and heat 160,00, Copenhill is the largest of 22 such plants plugged into Copenhagen’s 35-year-old district heating system, a network that serves 98% of the city and is one of the most extensive of its kind in Europe.

Copenhill’s ingenuity comes from Ingel’s architectural decision to create a building shape that responds to the ascending height of the various elements of industrial machinery that waste-to-energy plants require, from processing pits (shallowest) to “scrubbers” (tallest), thus creating the distinctive sloping roof profile. This then forms the artificial decline of the ski slope and park above. For Ingels, Copenhill stands as an icon to his belief that the future of sustainability is not just found in its worthiness but that it can be “hedonistic” too.