The space behind the world’s most famous advertising hoarding has been empty since the 1950s. Now Land Securities is building a 144,000ft² mixed-use scheme – while keeping those lights on. Thomas Lane reports 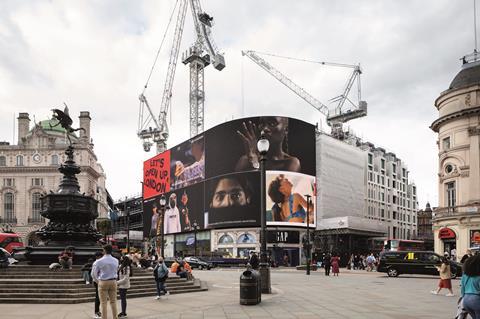 Land Securities acquired the so-called Piccadilly Lights in 1968 but only purchased the last building on the island site behind the lights in 2012, unlocking the site for this scheme

It is rare to find a place special enough to warrant a developer spending the best part of 50 years patiently acquiring the freeholds of all the properties needed to complete a development site. The site behind the world famous advertising hoardings at Piccadilly Circus is that place – developer Land Securities acquired the so-called Piccadilly Lights in 1968 and only purchased the last building on the island site behind the lights in 2012. This purchase unlocked a site big enough for a 144,000ft2 mixed use scheme called Lucent, which will include 110,000ft2 of offices, 30,000ft2 of retail and seven apartments.

Building in central London is never easy, but this site is particularly constrained. The lights occupy 780m2 of vertical real estate – bigger than a tennis court – and are supported at the back by a steel frame. The lights will form one of the facades of the new scheme, which involves building a frame right up against the screen and taking the old one down.

Land Securities made things very clear to Stephen Bradbury, the project director for Wates Construction, about the priorities for this side of the building. “Absolutely, do not compromise the operation of the Piccadilly Lights,” he says.

The lights are only one element of a very complex scheme. The site is bordered by Shaftesbury Avenue to the east, pedestrianised Sherwood Street to the west and Denman Street to the north. Over half of the ground and first floor of the site is occupied by three retail units to the south, with the whole of the western extremity occupied by a three-storey building that includes the Coqbull restaurant at ground-floor level. “Normally you can get to three sides of a building; here you can only get to two sides,” says Bradbury.