The iconic Commonwealth Institute needed a new tenant - and the iconic Design Museum needed a new home. But adapting a fragile and low-spec sixties building to house a visitor attraction meant using some serious technical know-how 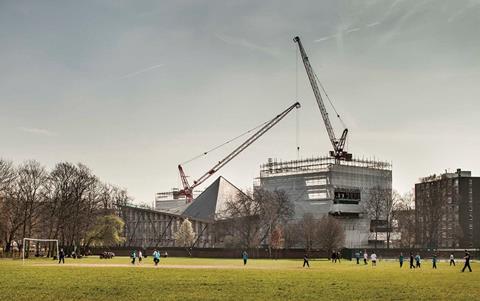 The Commonwealth Institute building in Kensington will provide a suitably iconic new home for the Design Museum when it moves in later this year. Described by English Heritage as the most significant post-war building in London after the Royal Festival Hall, the Commonwealth Institute is a much more exciting prospect than the boxy banana warehouse conversion the museum currently occupies. Completed in 1962, it features the first hyperbolic paraboloid roof to be constructed in the UK, which was adopted by its architect, Robert Matthew Johnson Marshall (now RMJM) as a response to the brief to build a “tent in the park”. Internally a massive void in the centre of the first and second floors allows visitors to fully appreciate the extraordinary roof structure from ground floor level.

The downside of such an architecturally focused building, which is grade II* listed, was finding a suitable use for it once the Commonwealth Institute moved out in 2002. It languished empty until developer Chelsfield came along with a proposal to unlock the site. “The Design Museum wanted to expand so it was a golden opportunity for them,” explains Chelsfield director Peter Rogers. “The principle was to redevelop the parabola building into a museum, which would be paid for by the three residential blocks in the land around the museum.”

The building needed radical surgery, however, to make the Design Museum’s move worthwhile. “It is quite awkward as only half the building has a basement and the upper floors are smallish with a huge opening in the middle,” explains Rogers. “To make it work as a museum we had to take out the floors and increase the floor-to-ceiling heights. The only way to do this was to go downwards. To do this we have effectively propped the roof up and taken the rest of the building away, which is a huge job.” 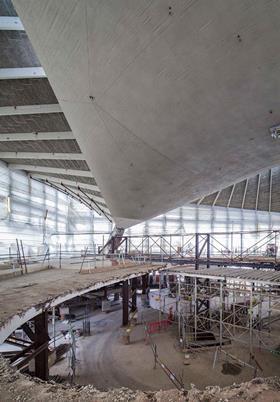 A large opening in the first and second floors allows people to appreciate the architecturally striking roof from ground floor level. These slabs are being replaced with floors with a smaller opening and more generous floor to ceiling heights

Creating a basement below an existing building is never easy but was particularly challenging in this case. “It was very much a penny-pinched sixties building and was one of the first to be value engineered,” explains Rogers. “There’s lots of slender, fragile pieces and the roof shell is only six inches deep.” Contractor Mace has supported the whole roof structure on temporary works while it has demolished the internal floor slabs and dug out a new basement. “Part of the challenge is holding up the building without it moving too much,” says Tim Peel, associate director of engineer Arup. “Because it is so fragile, bits will break if these move relative to each other.”

The original plan was to demolish the slabs from the second floor down, dig out the basement then construct the new slabs. “When we looked at this, it wasn’t programme-friendly so we decided to go for top-down construction,” says Jonathan Emmines, Mace’s project director. The three blocks and museum share a common basement and getting this built quickly meant the residential blocks could be completed earlier. The downside of this approach is that more temporary works are needed. “The key thing about the top-down solution is you have to pick up the whole building including the bits that are going to be demolished,” explains Peel.

The first job was to gain a full understanding of the unusual structure. “There was a lot of desk work and modelling to understand how it behaved under various loading conditions,” says Peel, adding that the complexity of the structure meant Arup developed the temporary works strategy for Mace.

The complex roof of the Commonwealth Institute is supported on just four columns. There are two internal cranked columns and two forked columns located outside the building on the north-west and south-east corners. The team has nicknamed the external columns “tent pegs” as they look similar to a guy rope holding up a tent. This creates an uncluttered space inside the building.

Bizarrely, the roof structure is supported by an arch in one plane and suspended from a catenary in the other. The two internal columns support the concrete arch with the thrust loads on the columns taken care of by a post-tensioned tie running through the first-floor slab. The catenary is supported from two points that are higher than the top of the arch. Concrete trusses extend diagonally from the tops of the internal columns to the high points and help support these with additional support provided by the external columns. Internally this creates a smooth concrete hyperbolic paraboloid soffit, which is the defining feature of the building interior. 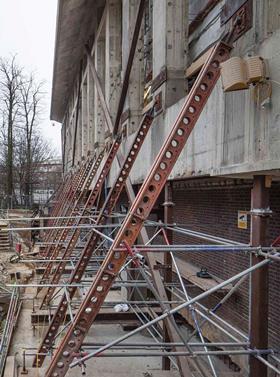 The first floor slab cantilevers to the building perimeter to support mullions which support roof rafters. Steel props take the loads allowing demolition of the slab

Concrete rafters span between the concrete trusses defining the edge of the hyperbolic paraboloid and the building perimeter. The rafters are supported at the perimeter by concrete mullions, which in turn are supported by the first floor slab, which cantilevers to the building edge. The gaps between the rafters are filled with wood wool planks, a cheap sixties blend of straw and concrete.

Before work could start the fragile roof structure had to be strengthened. “We designed a series of strengthening works to help the roof survive being picked up in mid air,” says Peel. The hollow cranked internal columns and C-section mullions were filled with concrete to strengthen these. A horizontal beam was put in at two levels between the mullions to provide additional stability. The slender internal rafters were originally installed as three precast sections with a post-tensioned tendon running the length of the rafter, and the concrete joints between the sections had deteriorated necessitating replacement.

The four columns sit on ground-bearing pads and the challenge was to transfer the loads on the columns from the pads to new piles to enable the creation of the new basement. Demolishing the first-floor slab was also challenging because it includes the post-tensioned tendons keeping the arch in place and supports the mullions which in turn hold up the ends of the roof rafters.

The first job was to put in piles to support the columns and break out the existing ground floor slab. Piles for the new slab were installed and the slab cast. This is 1m lower than the original to create more generous floor-to-ceiling heights. With the new slab in place work could start on removing earth below to create the new basement.

Four piles were sunk around the external forked column pad footings. These piles support a concrete collar cast around the footings. Holes were drilled through the collar and original footing and Macalloy bars inserted to enable the new collar and piles to pick up the loads from the column. The basement goes under the south-eastern forked column and will be ultimately supported by the slab, and the piles removed.

A similar technique was employed for the internal cranked columns - the main difference being that a steel collar has been used to transfer loads from the column to the new piles rather than concrete. New columns will be constructed in the basement underneath the cranked columns and the piles and steel collar removed.

The second-floor slab has been demolished, as this was a straightforward job. Demolishing the first-floor slab is much more complicated because of the tendons in this slab restraining the arch and the mullions sitting on the slab at the building perimeter. The mullions have been supported with steel props and Macalloy bars positioned between the two internal columns, and the loads from the arch have been transferred from the tendons to the bars, enabling demolition work to start on the slab. 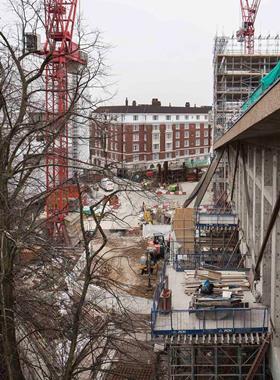 This work has been carefully monitored using an automatic target system. Targets are placed on critical structural elements and monitored by equipment mounted on local, static objects including an Odeon cinema on the other side of the road from the Commonwealth Institute. If the building moves outside tolerances which vary from 5mm to 20mm the team receives a warning alert. “We’ve had the odd panic when the sun was warming the support brackets, causing these to move,” says Rogers. He adds that the building has moved occasionally but has tended to settle back to its original position. The north-east corner moved but was controlled by jacking the forked column by 1mm to compensate.

Work is well advanced on the basement and once the first-floor slab has been taken out work can start on putting the building back together. The new slabs will have higher load capacities with a smaller opening in the middle to create more space inside the building. Chelsfield will hand over the building over to the Design Museum during the third quarter of this year, ready for its fitout, which is being designed by minimalist architect John Pawson. The building will open towards the end of the year with a new lease of life as an icon for modern design. 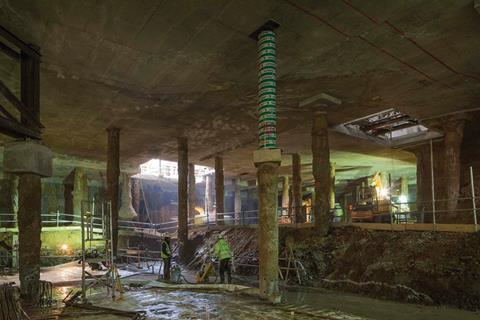 The project value is £105m excluding the Design Museum fitout. Mace first got involved in the job as construction adviser and procured early packages including soft strip, structural enabling works and secant piling with Keltbray, under a construction management contract. While this was being done, packages were negotiated with other suppliers and in a sign of the times, the job was flipped to a fixed-price contract. The same approach has been adopted with the residential blocks. Some high-end fitout items for the blocks had to be negotiated and procured early by Chelsfield, and these have been novated to Mace.

But are the complexities and unknowns associated with this job suited to a lump sum contract? “We’ve tried to keep it as collaborative as possible despite going to lump sum,” says Rogers. He says a weekly meeting between Mace and Chelsfield provides a forum to thrash out any issues and keep the job moving forward. 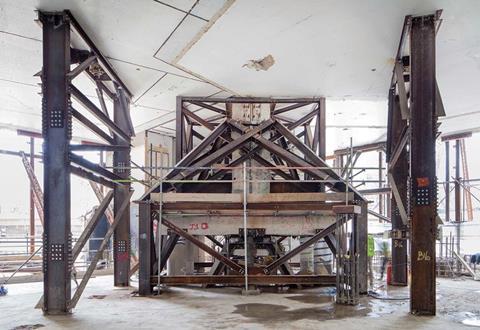 The main columns terminated at ground level. Temporary piles connected to the column via a steel box enabled the creation of the basement