Darling, you were marvellous 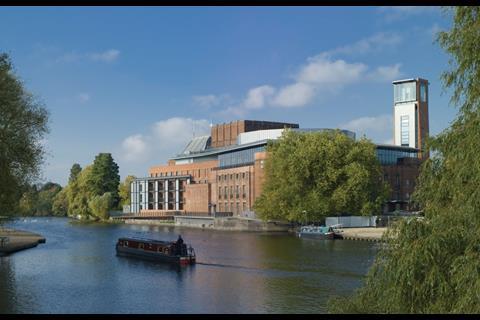 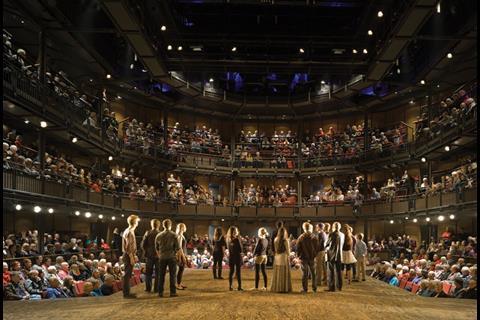 The new “thrust” stage significantly reduces the distance between actors and the audience. 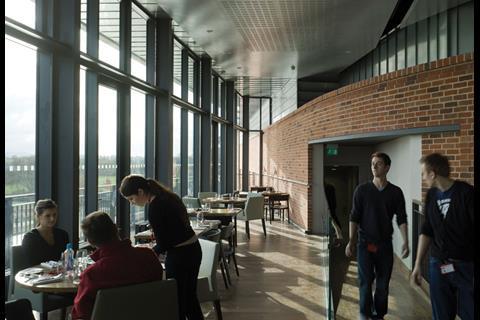 The rooftop restaurant offers views over the River Avon. 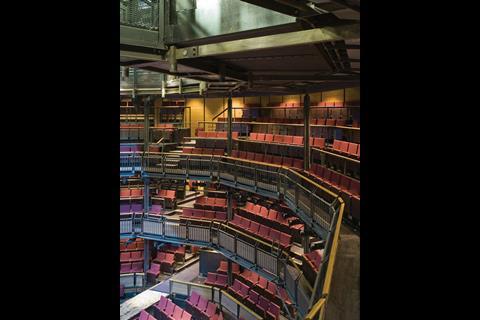 The capacity of the Royal Shakespeare auditorim has been reduced from 1,400 to 1,040 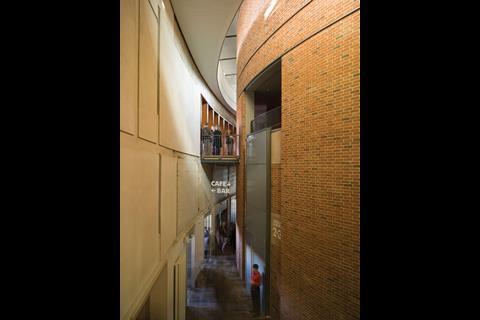 The ‘foyer void’ is enclosed by the new Royal Shakespeare auditorium to the right and the former entrance hall to the left. 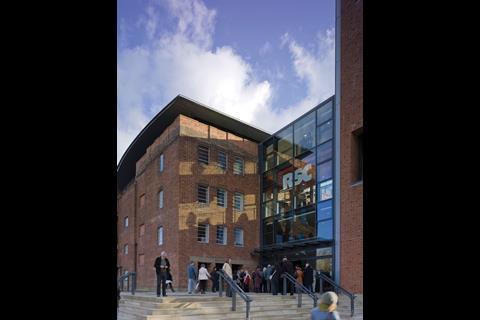 Bennetts’ sensitive conversion of the RSC’s Stratford theatre is a palpable hit, writes Ike Ijeh, and should have audiences in raptures

There are few places so synonymous with one individual or event that it becomes virtually impossible for popular culture to separate one from the other. Dallas has the assassination
of President Kennedy, Bethlehem has Jesus Christ and Stratford-upon-Avon has William Shakespeare. Inevitably, the birthplace of the world’s greatest playwright is in thrall to his legacy and he remains at the core of the town’s entire cultural and economic infrastructure.

Perhaps the most visible example of this is the Royal Shakespeare Company (RSC), whose spiritual home is its theatre in the centre of town.

Its re-opening this week, after a four-year closure and £112m redevelopment - and in time for the RSC’s 50th anniversary – is therefore a major event.

Bennetts Associates’ refurbishment is a combination of new and retained structures and keeps the two auditoriums - the Royal Shakespeare and smaller Swan Theatre - of the previous design. 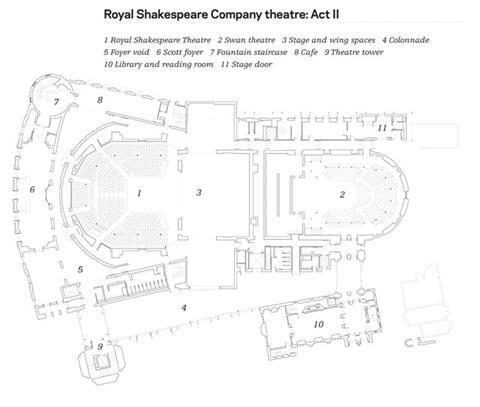 The original theatre was designed by celebrated female architect Elizabeth Scott in the thirties in a gregarious though wilfully cinematic art deco style. Although this provided some jazzy interiors, it also sowed the seeds for many of the problems the theatre subsequently experienced. The audience was generally too far from the stage, a potentially disastrous impediment to the intimacy that much of Shakespeare’s drama demands. The old theatre also had no public lift. And perhaps most disruptively, both auditoriums shared the same back-of-house space, which often gave rise to confusion back stage during performances.

By the late nineties, the problems were so severe that Dutch architect Erick van Egeraat proposed flattening the place and starting again. When Bennetts was commissioned in 2004, it proposed an altogether more sensitive approach which has now been realised.

Some of Scott’s work has been retained, but ancillary circulation areas have been replaced by a new building in which spaces weave between and around the two auditoriums. The two theatres themselves have been upgraded, particularly the Royal Shakespeare where, in a bold commercial move, capacity has been reduced to help decrease the distance between the stage and the furthest spectator from 27m to 15m.

The creation of a new “thrust” stage, with the audience around three sides, has also helped improve intimacy, sightlines and acoustics.

Elsewhere, back-of-house spaces have been rationalised, a new entrance, (known as the “Colonnade”), has been added and a roof-top restaurant and new exhibition spaces have been installed. The new Western Square provides a generous public forecourt to the theatre and a decked riverside walkway significantly improves an existing public route that runs alongside the River Avon.

One of the most complex technical aspects of the project was the construction of a 7m double-deck basement underneath the stage to the Royal Shakespeare. Integrating this with the existing basement and preventing the ingress of water from the adjacent river proved challenging, but has provided the theatre with the capacity to stage exceptionally ambitious productions with scenery and actors able to vanish and reappear at a moment’s notice.

But the strongest feature of the new theatre is to be found externally. A 36m-high tower soars beside the entrance and is now the tallest structure in Stratford-upon-Avon. Even better, it is publicly accessible and is surmounted by a viewing platform that provides spectacular panoramas of four surrounding counties.

The tower itself is a historical nod to the Victorian water tower that occupied the site before burning down in 1926. Built with a concrete core but encased in load-bearing external brick walls it provides a strong, contemporary landmark for both the theatre and the town. And yet, with its tapering form, glazed lantern, punched openings and utilitarian brickwork, it is steeped in a rural vernacular that is both inventive and contextual. Robust yet elegant, contemporary yet sympathetic, it shows the new RSC at its best.

Elsewhere the additions are marked by a more timid approach, but one that remains considered. It is always more difficult to give new architecture a strong identity when inserting it into old architecture. This remains the perennial challenge of conservation, particularly in instances where the profile and notoriety of the existing structures impose particularly onerous constraints on the new.

The aura of the old theatre pervades Bennetts’ work at the RSC. The new red brick mimics the paler stock of the existing buildings. The boards once trod by Olivier and Richardson have been retained in a new lobby. Ominous grey patches on new walls indicate where original aluminum fixtures have been removed. A lovingly restored formerly external brick wall
pops up unexpectedly in the new roof-top restaurant.

Even the glitzy, thirties chrome-emblazoned box office booth that once stood in the old entrance hall has been attached to a new rail system that allows it to be hoisted upwards to allow access to the space beyond.

History is as tangible here as bricks and mortar, a remarkable achievement for a development that still retains a contemporary feel.

This approach is carefully executed with meticulous details throughout, as it should be. It may, however, be a victim of its own success. Beyond the tower, much of the new architecture is too measured to make an impact of its own - deference often overwhelms drama. However, what the RSC may lack in wow factor or excitement it compensates for in sensitivity and consideration.

Furthermore, its sympathetic interface between old and new creates an intricate architectural tapestry that should doubtless extend the RSC’s iconic reputation for decades to come. Michael Boyd, the RSC’s charismatic artistic director, is on solid ground when he claims that his new theatre is simply “the best stage for performing Shakespeare in the world”.