﻿There’s more than one way to achieve contextualism, and Morphosis Architects’ Giant Campus in Shanghai goes for the provocative approach. Ike Ijeh is beguiled. Photographs by Roland Halbe 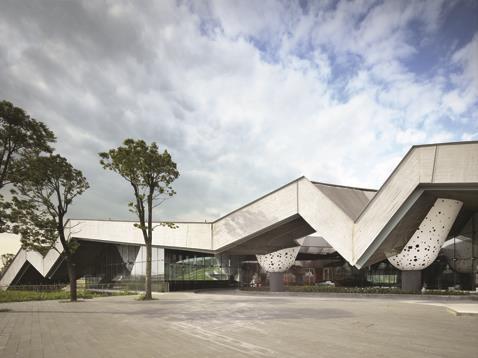 US practice Morphosis Architects has just completed a new headquarters complex in Shanghai for China-based media company Giant Group. Essentially a compact village, the 23,996m2 development consists of two campuses on which the company’s workforce is based.
Open-plan offices and executive suites are housed in the East Campus building while the West Campus has a hotel for corporate guests, apartments and sports and leisure facilities for staff. The development also includes a new lake to complement the canals already on the site.

The architectural form of the Giant Campus is futuristic, amorphous and dynamic. Continuing Morphosis’ strong tradition of contextual conceptualism, the blocks are sculpted to flow in and out of the landscape, merging energetically with the natural environment.

In the practice’s own words: “Familiar distinctions between city and landscape, site and non-site, imagined and real, bleed into one another. Landscape, once the blank canvas for architecture and urbanism, becomes an active tool, shaped by complex urban forces but also, reciprocally, shaping its context.”

Although acutely aware of context, this approach is not necessarily intended to create harmony with it. It is much more about visually anchoring the development in its surroundings by establishing a series of proactive and sometimes paradoxical relationships with them. Architecturally these are defined by a series of submerged and protruding forms which set up a dramatic interplay between building
and landscape.

The main circulation route is a thrusting, high-level, enclosed walkway that links the two campuses and forces the landscape to flow underneath and around it. The asymmetrical lines of an undulating green roof intermittently rise up from the landscape before plunging back down. A pedestrian plaza inclines precariously towards the water’s edge. Most dramatic of all is the three-storey block with an astonishingly long cantilever out over the lake.

Internally and externally, the building flaunts a level of visual incoherence and sculptural contortion that is reminiscent of deconstructionism. Yet with its endlessly shifting angles, folded surfaces and agile, free-flowing forms, it also makes an infinitely beguiling, if confusing, set-piece. The viewer is fascinated by what this explosive structure might do next.

Yet this is not deconstructionist architecture by any means. This is because the primary intent of this building is to unify - in this instance with its landscape - rather than disrupt. Some may consider the manner of its attempt to be provocative and unorthodox. But Giant Campus forcibly argues that contextualism can be achieved by contrast as well as harmony.