Next week, Europe comes together for Euro 2016. But it’s not just sporting prowess that will be on display, as host France showcases a dazzling array of new and refurbished stadiums. Ike Ijeh kicks off an architectural tour of all 10 venues, starting with the new stadiums… 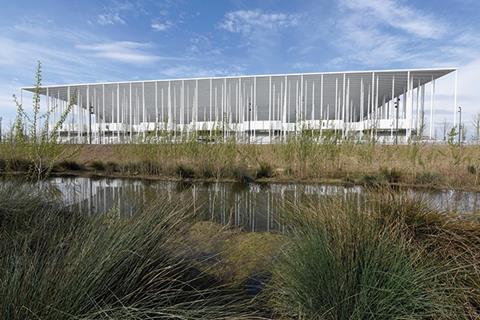 Herzog & de Meuron continues its pioneering redefinition of stadium design with its fourth major stadium after Basel, Munich and Beijing. Here, like Beijing, the stadium is stripped of its traditional facade leaving the underside of the seating bowl exposed to outside view. This bowl is then wrapped in a forest of perimeter columns which mimic the formal positioning of trees in the surrounding landscape. The entire composition is drenched in gleaming whitewashed surfaces, selected to emphasise the architecture’s elegant, streamlined minimalism but also chosen to reflect the sporting neutrality demanded by the venue’s multi-purpose accommodation of non-football events such as rugby and concerts. The design of the stadium is heavily influenced by traditional English stadiums, with the architects seeking to evoke the intense, immersive atmosphere often found in UK football venues. There is one key difference though, an open concourse housing multiple, alcohol-selling concessions is visible from the stands, a feature that would not be permitted in Britain. As with the Olympic Games, the European Championships prohibit unofficial sponsorship so for the duration of the tournament insurer Matmut will temporarily lose naming rights and the venue will revert to its original name of Stade de Bordeaux. 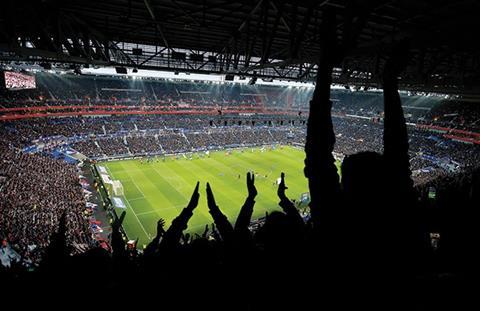 France’s newest major stadium is home to the top-division French club after which it takes its name. However, its design has been inspired by two rather more unlikely conceptual precedents: medieval castles and English stadiums. The stadium’s outer envelope is a hulking mass of sheer concrete walls occasionally relieved by narrow slit openings, a direct evocation of a defensive medieval fortress deliberately adopted to intimidate and overawe visiting opponents. Additionally, the English influence is felt in two ways. First in the steeper stands, encircling roof and the lack of an athletics track common in England and said to foster a more intense and energised spectator experience. And secondly in the sheer amount of corporate hospitality facilities incorporated into the venue, a deliberate attempt to mirror the commercial success Arsenal realised with the construction of their celebrated Emirates ground, also designed by Populous. The commercial influence is also evident outside the stadium. The venue forms the centrepiece of a wider masterplan that will include retail, leisure and office developments. These ventures are facilitated by the startling fact that the Parc Olympique Lyonnais is one of only two privately owned major football grounds in the entire country. At 53,700m² the stadium’s fully flexible fabric roof canopy is one of the largest roofs of its kind in the world and the stadium is also surrounded by Europe’s largest turf car park. 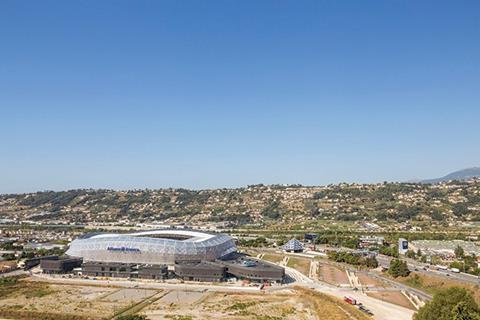 The municipality of Nice had been trying to build a new stadium to replace the antiquated Stade du Ray for several years and rebuilding attempts failed in 2002 and 2006. It was only when France was named as the host of Euro 2016 in 2010 that plans finally got off the ground. The stadium lies within the 3,000ha Nice Eco Valley Project which describes itself as a “test lab for the urbanism of the future.” In response to this brief, the stadium has been fully integrated into the surrounding urban landscape and its envelope has been designed as a compact, undulating form that mimics the flight of a bird. The structure of this external skin comprises a lightweight steel and timber space frame that supports a continuous transparent membrane of ETFE, enabling the building to glow at night. Additionally, as part of the eco urbanism brief, the stadium is surrounded by a series of public spaces, pedestrian routes and tramways that provide direct connections to the rest of the city. Like the Stade de Bordeaux, due to naming rights restrictions that stadium will be known as Stade de Nice throughout the tournament. 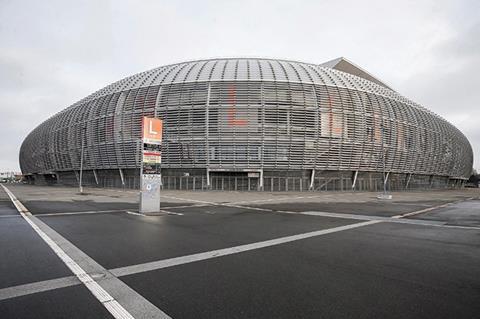 Named after a former Lille mayor and an ex-French prime minister, the Stade Pierre Mauroy is one of the most high-tech stadiums in the world. Not only is it France’s first major stadium with a fully retractable roof, but it is a sophisticated state-of-the-art venue that incorporates some of the most innovative engineering features to be found on any European stadium. These include solar panels and two windmills to provide electricity. It also includes an extraordinary elliptical facade comprising 12,000 translucent polycarbonate tubes and 70,000 LED lights that transform the envelope into a fully animated display and performance screen at night. But by far the most impressive feature is the half-retractable stadium pitch, the first of its kind in the world. A network of giant hydraulic tracks and lifts raise half the pitch and slide it above the other half revealing additional tiers of seating below in a process that takes around three hours. With a temporary partition drawn across the other half of the stadium and the roof closed, a procedure that lasts just 15 minutes, the exposed sunken half combines with upper tier seating to be transformed into a smaller basketball, tennis or music arena with a reduced capacity of 6,900 to 30,000 seats.