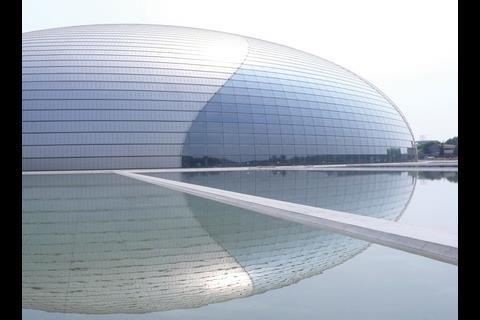 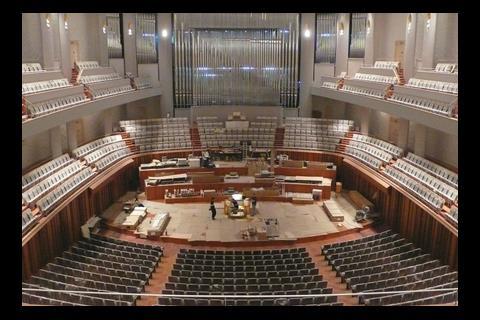 The 2398-seat opera house is one of three huge auditoriums

Paul Andreu’s Beijing theatre has been dubbed the Egg. But how do you get into it? And what do you see when you do?

It has been compared to a giant egg, but an enormous soufflé might be a better description. After all, much of its interior is taken up by thin air. And it has been cooked up by a French architect, Paul Andreu.

Whether raw or souffléd, this egg is the £254m China Grand National Theatre, sited in a large ornamental pool, around the corner from Tiananmen Square in Beijing. It is the first in a spate of grands projets to grace the city in preparation for next year’s Olympics.

The moniker “theatre” is also a bit of a misnomer. There is a theatre here, with a capacity of 1,035 seats, but it is eclipsed by two even larger auditoriums: a 2,019-seat concert hall and a monumental opera house of 2,398 seats. The three sit like triple yolks within one enormous shell. And instead of albumen, the space between them is filled with air.

As the building is surrounded by water, the entrances are all underground. They do, however, come with glass roofs that allow visitors to see through the rippling water overhead.

Except for a glazed central portion, the 220m long roof is entirely sheathed in titanium alloy. Quite a lot of it. In fact, the Mitsubishi Chemical of Japan supplied 43,000m2, which is the largest amount of this exorbitant material ever used in a single building. Inside the building, the three auditoriums are screened by wire mesh curtains supplied by GKD of Germany.

An international competition launched in 1998 was drawn out into five arduous stages. After Andreu’s design was selected in 1999, the accommodation brief doubled in area and the cost of Andreu’s scheme trebled. A year later, after two petitions were lodged by aggrieved Chinese scientists and architects, Andreu had to cut costs 25%.

Then in 2004, in another corner of the globe, four people were killed by the collapse of high-level walkways at Charles de Gaulle. Although Andreu was exonerated, the Chinese theatre was halted while safety measures were reviewed.

With such drama en route, it is little wonder that completion was extended by 20 months. But Andreu can at least take pride that his monumental egg and its triple yolk have remained intact.