As if one shocking shopfront look wasn’t enough, Birmingham’s sassy Selfridges has donned a temporary garb of even greater gaudiness while faults are fixed in the glittering blue chainmail below. Thomas Lane explains the technical challenges. Photography by Oliver Lane 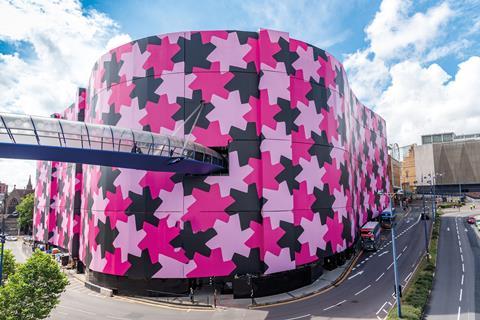 The wrap, designed by womenswear fashion designer and artist Osman Yousefzada, is said to be the world’s largest scaffolding wrap

When the covers came off the newly completed Birmingham branch of Selfridges in 2003, the city stopped to pause for breath. Brought up on a thin diet of mostly characterless, orthogonal, concrete boxes, for locals the new store was a genuine showstopper and a first for the city.

The retailer wanted a distinctive building that did not need a sign saying “Selfridges” over the door so commissioned Future Systems, an architect known for pushing design boundaries, to come up with something radical. The answer was a rich cobalt blue, curvaceous, sculptural form covered in 16,000 shiny aluminium discs – said to have been inspired by a Paco Rabanne chainmail-effect dress. It certainly succeeded in bringing a splash of glamour to an otherwise pedestrian shopping centre. 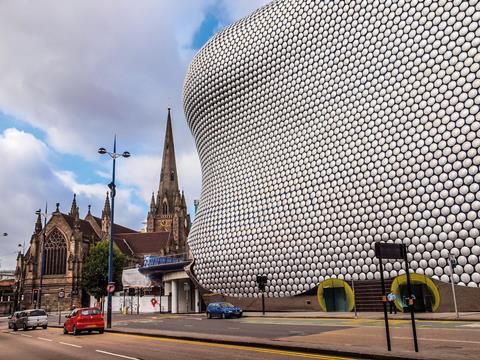 The building before remediation began

Over the course of this year the store has undergone a similarly radical transformation. Scaffolding has gone up around the building and is now wrapped in a pattern of eye-poppingly vivid, tessellating black and pink cogs. Designed by Osman Yousefzada, a womenswear fashion designer and artist, it covers 9,000m2 and is said to be the world’s largest scaffolding wrap. As with the original exterior, the idea is to maintain the distinctive, unique identity of Selfridges, which remains open while the facade is being refurbished. The real purpose of the scaffolding and its colourful wrapping, however, is to provide access and weather protection for the Bam team charged with the work of remedying serious problems found in the building’s distinctive chainmail-style cladding.

One of the downsides of innovative design is the risk of premature failure. In this case the building started leaking 17 years into its life, despite the cladding having been designed to last twice as long. After multiple investigations failed to pinpoint the source of the leaks, building owner Hammerson decided the best course of action was to replace the cladding at a cost of £20m. The insulation is being upgraded at the same time, helping Hammerson to achieve its sustainability target of transitioning 50% of its flagship assets to net zero by 2030. 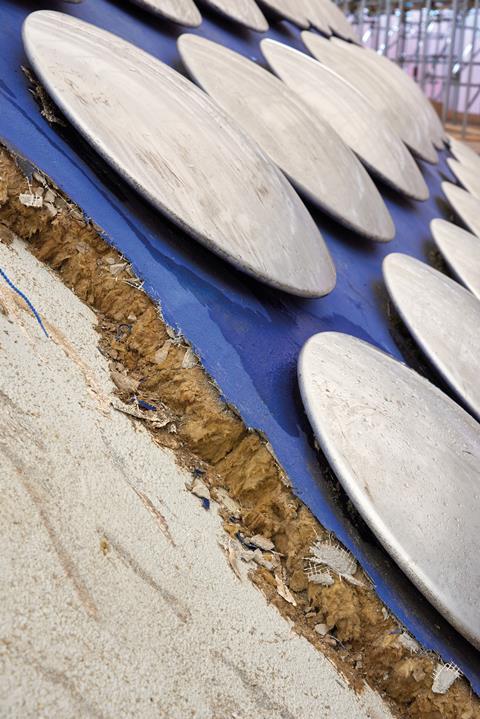 The old render of sprayed concrete was insufficiently robust

Walking around the building on the scaffolding – an unworldly experience as everything is bathed in a wrap-filtered soft pink light – one possible source of the leaks becomes apparent. There are visible cracks in the outer concrete layer.

“It wasn’t something where we could determine the cause,” explains David Hartley, Bam’s project manager. “It could have been impacts from abseilers or birds, a weakness in the installation, or the concrete wasn’t thick enough, so gradually over time the wet and freeze-thaw cycles have caused it to crack.”

Regardless of the cause, a belt-and-braces solution was essential to ensure the problem did not recur. Hartley says Hammerson’s primary focus was getting the render right – making sure it was suitable for this application and applied in the right way.

“The shape of the building meant it was quite hard to find one party to propose a product with the required warranties, because some areas are classified as walls and some areas as roof,” he explains. “It meant a bespoke system had to be devised and put through a testing process to make sure it would do what was required.”

The shape of the building meant it was quite hard to find one party to propose a render product with the required warranties, because some areas are classified as walls and some areas as roof

Render specialist Parex proposed a bespoke solution that met the specification drawn up by facade consultant Wintech for Selfridges. This consists of a 150mm layer of Rockwool insulation – double the thickness of the original – with much better compressive strength. A flexible polymer-based render is applied in three 3mm-thick layers that incorporate two layers of plastic reinforcing mesh. This is topped by two coats of SikaGard waterproofing primer with a reinforcing fibreglass layer, followed by two finishing coats of blue. 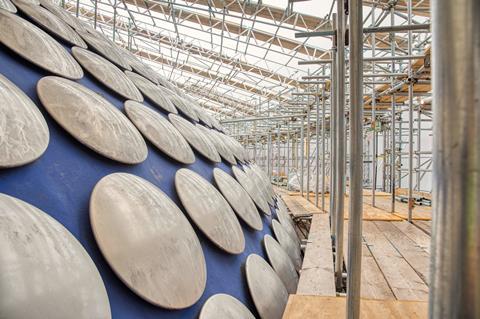 The scaffolding and wrap give the team access to the cladding and weather protection, respectively

This build-up was tested on a 3m x 3m concrete sample that replicated the most extreme curvature found on the storefront. This was subjected to a battery of tests, including the impacts of abseilers and other potential hazards, to make sure it was up to the job. Then it was tested to destruction just to see how much abuse it could take.

“This proved the point that, if someone wanted to vandalise the building, they would struggle to do so,” says Hartley. Finite element analysis was also carried out to simulate the impact of climate change on the system. “It helped confirm to the client that it would withstand extreme temperatures.” 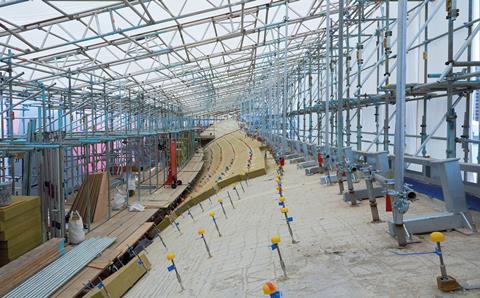 The scaffolding is a major part of the job – the first 40 weeks of the programme are spent on putting it up and the last 30 weeks on taking it down, although some of the facade work takes place in parallel. “If you consider the magnitude of a 90-week programme and 70 weeks of this are scaffolders either putting it up or taking it down,  then you can see it is pretty fundamental to the delivery of the job,” says Hartley.

He adds that there will always be scaffolders on site to make adjustments as the old cladding is removed and again as new material is put on. “It is an ever-changing thing throughout the entirety of the project.” 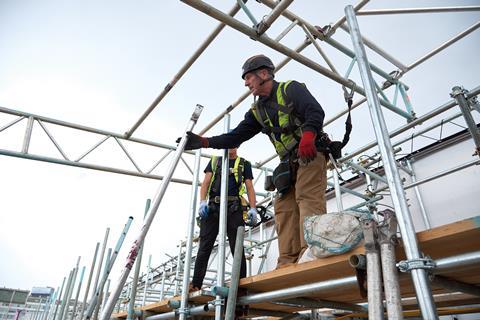 The scaffolding is 250m long and 38m high and consists of 20 lifts, two bays deep. The outer bay is the structural zone and houses the hoists and stairs, while the inner zone is the working platform. The scaffolding is much deeper where the building curves in away from the vertical outer face of the wrap. This presented the largest technical challenge in Midland Scaffolding Services’ 40-year history and took four solid months of design work and 18 months of planning.

Work started on erecting the scaffolding in November 2020. The first two lifts were installed all the way around the store to accommodate the hoardings and get the disruptive ground-level work out of the way. This had to be done at night when the buses – which stop right outside the store – were not running. Then the scaffolders concentrated on the left-hand side on Upper Dean Street before moving around the building.

Eight months to erect the scaffolding

The scaffolding, which was installed by specialist Embrace Building Wraps, was completed at the beginning of August. The striking pattern was digitally printed onto solid PVC sheet and installed into 24 separate frames in a variety of shapes and sizes to accommodate the building’s form. The panels, measuring on average 388m2, each had to line up perfectly with its neighbours.

Bam started work removing the discs and the original render and insulation below in February, in the areas where the scaffolding was finished. Because the store is remaining operational during the work, noise was potentially an issue. 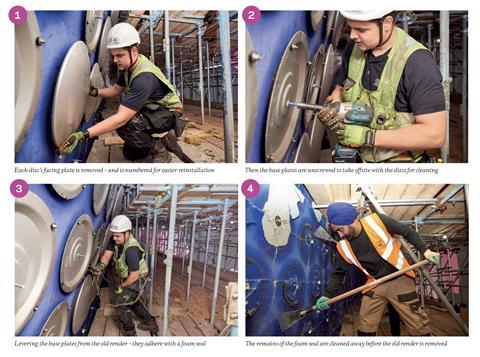 “The main brief from Hammerson was to keep Selfridges happy,” Hartley says. There are acoustic monitors inside the store to alert the team if noise levels are exceeded. Hartley says noisy works are limited to before 10am, when the store opens, or are reserved for night shifts.

The work is done in sections. Within each section, each disc’s facing plate is removed first, then the base plates. All the discs are individually numbered to reduce the risk of problems during reinstallation after the new render is applied.

The discs, which Hartley says are in good condition apart from the odd scuff mark, are then taken to a nearby warehouse. There the original foam seals are removed from the rear of the base plates then the discs and base plates are cleaned and new seals fitted, before the discs are bagged up ready to bring back to site when the time comes. 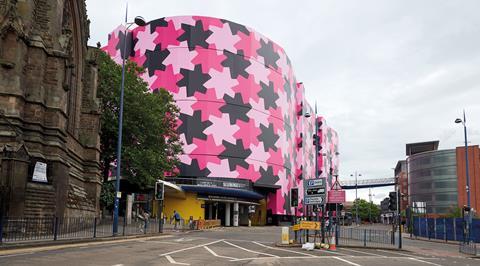 Selfridge’s remains open during the works

With the discs out of the way, the outer render layer can be removed. “It comes off relatively easily, but it is a tedious process as it is such a large area and very repetitive,” Hartley says.

The old insulation and the studs that hold on the discs are removed. The latter are replaced with a longer version to accommodate the thicker insulation. These are attached with a threaded coupler to the short piece of stud sticking out of the base building shell. A percentage are pull-tested to check the integrity of the underlying connection within the inner concrete shell.

New, thicker insulation batts are attached to the building shell with adhesive. Then the render and mesh are applied over the top. Work on the waterproofing and finishing coats and on reattaching the refurbished discs will start towards the end of this month. The work is scheduled to complete in August 2022,  when Selfridges will reclaim its original landmark status – hopefully, for the next 30 years.