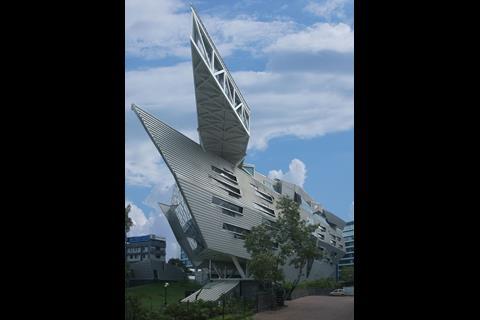 The folded planes and asymetrical geometries of the Grand Palladium give a dynamic, futuristic feel 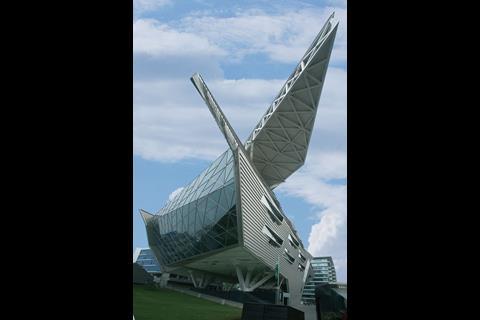 The “director’s cabin”, inside a cross-braced box girder, soars dramatically over the steel superstructure 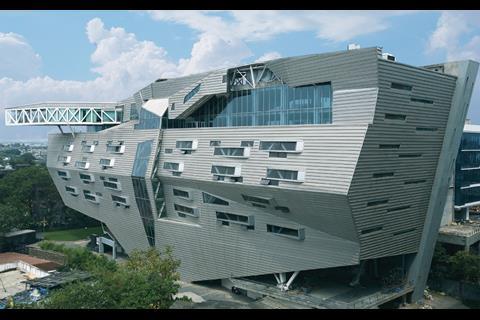 The folded planes and asymetrical geometries of the Grand Palladium give a dynamic, futuristic feel

Nestling amid the more conventional urban surroundings of Mumbai’s main commercial hub lies one of the Indian city’s most unusual buildings. Designed by local architect Kamal Malik and engineered by WSP, the Grand Palladium is the new corporate headquarters for GMS Group, a local multi-disciplinary manufacturer.

The Grand Palladium is one of the few commercial steel buildings in India. With its asymmetrical geometries, angular portholes, steel facades and precariously cantilevered deck, the building resembles a docked spacecraft incongruously stranded in the centre of the city.

The seven-storey structure is predominantly clad in horizontally ribbed steel panels, with narrow rectangular openings sliced into the facade. The steel superstructure is supported by a reinforced concrete podium and a web of irregularly arranged, inclined steel box columns within an undercroft.

Externally the Grand Palladium is defined by a series of splayed angles and folded, asymmetrical planes that provide a distinctly futuristic look. This culminates
in a cross-braced box girder that extends dramatically from the top floor and contains the “director’s cabin”.

The uniform steel cladding and articulated surfaces also endow the building with a highly mechanised and vehicular character, almost as if its current form is merely a temporary
stage in a process of dynamic transformation.

Network with fellow building professionals at Sustainability Now from the comfort of your own chair! Less than 3 weeks to go – Register now for FREE!