Next stop for Battersea 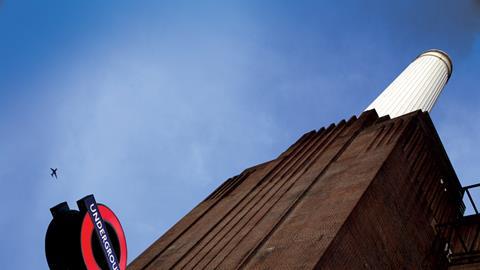 A century-and-a-half after the first London underground railway opened, Building looks at how the tube’s extension to Battersea could help regenerate the area

150 years ago this week, the world’s first ever underground system opened. London’s iconic tube began life in January 1863 as a ground-breaking subterranean steam railway linking the 3.5 miles between fledgling rail terminuses at Paddington and Farringdon. Today it has grown into the world’s third-largest urban metro network with only the systems in Shanghai and Seoul covering a slightly greater area. But by 2019, London Underground may edge back into second place if the proposed Northern line extension to Battersea opens.

The proposals are at consultation stage at present and will still have to undergo several substantial statutory hurdles before they see the light of day. These include the submission of an inevitably gargantuan Transport and Works Acts Order (TWAO) application in the spring and a public inquiry later this year. If all goes to plan, Transport for London anticipates that construction could start in just two years’ time and that trains could be running on the new line before the end of the decade.

Assuming this takes place, it will be the most significant increase in capacity on the London Underground network since the addition of 11 new stations to the Jubilee line in the nineties. And as with the Jubilee extension, the infrastructure will be critical to the viability and potential success of a series of major redevelopment and regeneration projects proposed along its route.

“The Jubilee line was instrumental in bringing forward the key developments in that region, it was the final catalyst needed to get things going,” Tollast says. He also points out thatone of the reasons why a consortium of builders failed to deliver on their proposals for redeveloping the site back in 1988 was its “poor infrastructure and connectivity”.

Stakeholders with an investment in Battersea’s regeneration hope that the Northern line extension may be equally beneficial for the host of redevelopment schemes planned there.Over the next decade, up to 16,000 new homes are planned in the Battersea and Nine Elms area, the construction of which has been estimated to generate up to 25,000 new jobs in what Wandsworth council describes as “central London’s biggest regeneration area.”

The largest of these proposed schemes is the £8bn Battersea Power Station project. Over the decades, the crumbling and derelict landmark has stubbornly and consistently defied all attempts at redevelopment and in the process has become a towering symbol of stalled urban regeneration. But since the purchase of the site last year - for £400m by a Malaysian consortium - followed by the approval last month of Phase 1 of the Rafael Viñoly-designed, 16ha, 3,500-home masterplan, the landmark site appears to be enjoying its best opportunity for redevelopment in a generation and completion of Phase 1 has been scheduled for as early as 2015.

But Battersea Power Station is not the only development whose prospects might be boosted by an extended Northern line; there is a host of other nearby regeneration schemes that may benefit, dotted around a vast 195ha swath of prime riverside land stretching from Battersea to Vauxhall.

These include the recently approved £620m US embassy on a site just north of the power station, Ballymore’s adjacent 1,982-unit Embassy Gardens scheme, Foster + Partners’ 2,326-unit redevelopment of New Covent Garden Market and Allies & Morrisons’ redevelopment of the Nine Elms Royal Mail Sorting Office into a series of residential towers ranging from five to 23 storeys.

Scores of commentators and public figures have lined up to link directly the potential success of these schemes with the creation of the proposed Northern line extension. Wandsworth council planning chairman Nick Cuff, mayor of London Boris Johnson, and even George Osborne, the chancellor himself, described the tube link as “key” to the redevelopment of the power station and to creating the 16,000 homes envisaged for the area.

Battersea Project Land Company’s (BPLC) Rob Tincknell also reveals that “in the wake of [the] announcement by the UK government to support the extension of the Northern line underground line to Battersea and Nine Elms, we have seen a new rush of interest in the development from potential purchasers.”

But just how critical is the tube extension to the success of the proposals at Battersea Power Station as well as the regeneration prospects of the wider area? Could all this be jeopardised if the extension doesn’t go ahead? 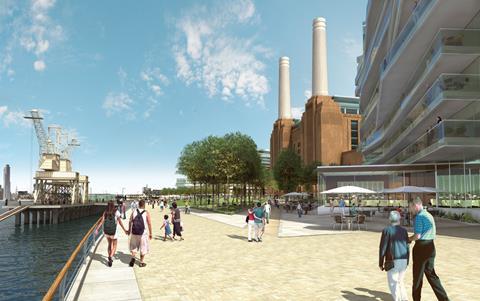 A visualisation of Viñoly’s Battersea masterplan

Mark Farmer, partner and head of residential at EC Harris believes that the Northern line extension’s potential impact is twofold. “Although the extension is definitely a plus, in the short-term there would probably be no immediate impact on the development prospects for the area if it didn’t happen. Battersea Park train station is located near the power station and Phase One has already received planning permission and is likely to be sold with success, even without the extension. TfL has also estimated that the area’s current transport links can support roughly an additional 8,000 homes and there is already an awareness amongst most investors that this is a fringe rather than core central London site.

“But in the medium to long-term and with the development of future phases, capacity will definitely be an issue and there would certainly be serious negatives to not having the extension built.”

Although the extension is definitely a plus, in the short-term there would probably be no immediate impact if it didn’t happen

Seema Manchanda, assistant director of planning and environmental services at Wandsworth council, describes the extension as a “critical part of delivering a mixed-use quarter at Battersea Power Station” and considers it the “priority” among the several transport schemes - including a new Thames pedestrian bridge and expanded riverbus services - being proposed for the area.

Intriguingly, Manchanda also points out that the extension’s viability is further underwritten by its critical role in securing the post-Phase 1 development of the site. “The planning consent for the site has a Grampian condition that has always required that occupation of any phase after Phase 1 would only take place once the Northern line extension was secured”.

Can the extension therefore be viewed as the critical ingredient that will finally deliver the redevelopment that has evaded Battersea Power Station for so long?

Both Farmer and Manchanda believe it can and Manchanda attributes the council’s confidence in the scheme to a “combination of the new Malaysian investors, a workable planning permission and greater certainty of delivering the infrastructure.” 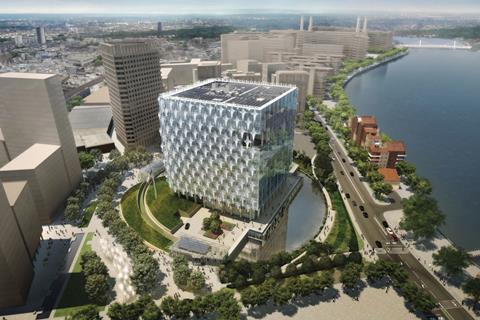 The planned US embassy

What if it doesn’t happen?

After the chancellor’s announcement, former London mayor Ken Livingstone was quick to point out that despite the government loan, the Northern line extension remains
“an aspiration which the government will consider” and that it is not a watertight “promise or commitment”.

Tube enthusiasts will also be well aware that the history of London’s underground network is littered with eagerly anticipated proposals that went nowhere. These include the perennially proposed extension of the Bakerloo line to Camberwell and the seventies’ planned Fleet line (although part of this route eventually morphed into the Jubilee line, hence its “battleship fleet” grey colour on the Underground map).

Others have also criticised the decision not to extend the new Northern line another two miles west to Clapham Junction, thus integrating the UK’s busiest train station into the tube network for the first time.

In response to both concerns, Manchanda points out that the government’s loan has “already been agreed and it will be paid back through the S106 contributions and business rates”.

“The main S106 agreements have been agreed already and once the Enterprise Zone is established a mechanism will be in place to secure the business rates. TfL are working hard on the TWAO so progress is well underway,” she adds.

She also admits that while there is “potential” for extending the line further to Clapham Junction and that the possibility is being “safeguarded”, “additional funding simply isn’t available at the moment”.

These views are echoed by Michelle Dix, managing director for planning at TfL:

“We would love to be able to extend the Northern line even further so it reaches Clapham Junction. Although currently there isn’t the funding available for this, we are working closely with the government and local boroughs on potential options for the future … and it is a requirement that the extension be designed so that an additional extension would be possible in the future.”

If, however, the Northern line extension to Battersea does happen, as all involved seem committed to ensuring, it may not only significantly accelerate the regeneration of
a forlorn and neglected part of London but

its approval in the same year as the tube’s 150th anniversary will also be a fitting tribute to a revolutionary public transport network whose inception transformed civil infrastructure and urban planning across the world.

While clearly no Crossrail, the construction process for the proposed Northern line extension will be a mammoth undertaking with complex deep-level tunnelling required under dense and heavily populated residential urban areas. Transport for London is currently exploring two options, both of which exploit the “optimum tunnelling conditions” offered by soft indigenous London clay.

The current method requires the construction of two new temporary vertical “grout” shafts at locations along the proposed route from which excavation could be pumped. These would stabilise and treat the ground prior to tunnelling in order to prevent structural damage to buildings.

An alternative approach would involve the construction of two 3m diameter “gallery tunnels” built at a slightly higher level than the new tube tunnels but from which ground treatment works could be undertaken without the surface-level disruption caused by the shafts.