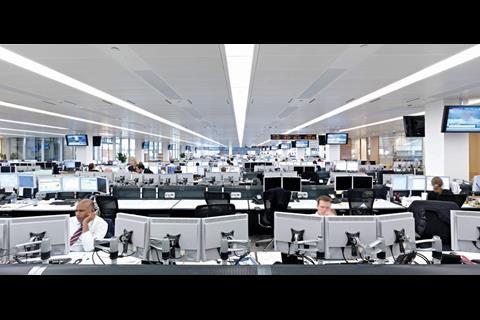 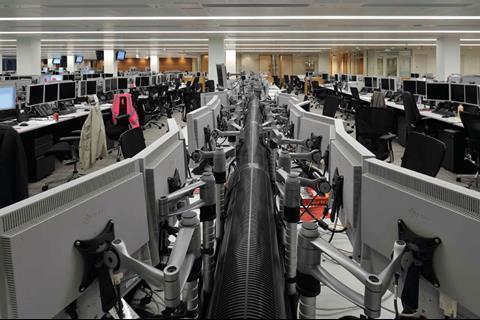 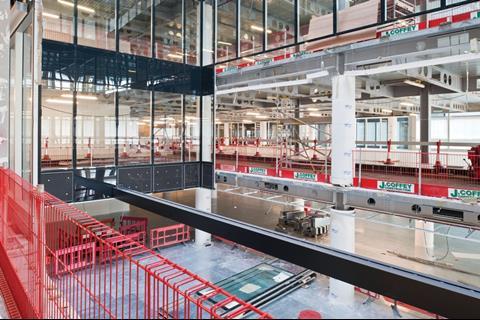 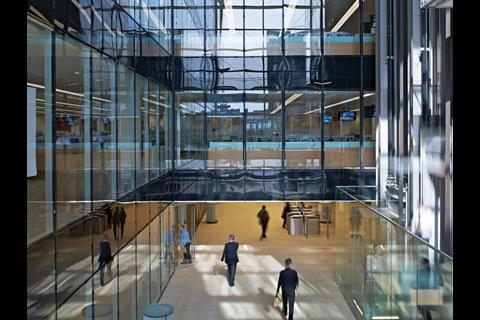 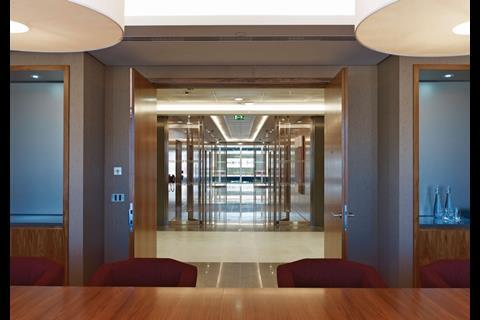 Invesment bank Nomura wanted its £100m, 400,000ft2 offfice fit-out completed in eight months, the problem was finding a contractor able to work at that pace. Building finds out how Como, Mace’s fit-out arm, managed to race to the finish line

They might not know it, but the traders in investment bank Nomura’s new headquarters are enjoying several world firsts. The air on the trading floors stays nice and cool, thanks to the world’s largest installation of chilled desks. The crisp, white light is provided by the world’s largest installation of linear LED lighting. And, although the project team can’t say for sure, this has to be one of the fastest fit-out jobs ever done. It cost more than £100m and the bulk of the work, some 400,000ft2 was done in just eight months by Como, the fit-out arm of Mace.

Why the breakneck speed? Well, Nomura had bought Lehman Brothers’ European and Asian business when the latter went bust in 2008. The combined business was located in the former Lehman Brothers building at Canary Wharf and Nomura’s existing office near St Paul’s in the City. The trouble was, the Canary Wharf building was too big, the lease was due to expire in 2009 and Nomura didn’t want a base in the Docklands anyway. Meanwhile, the City building was too small. It was clear a new office was needed.

In these situations it’s best to phone friends for help. Tony Bartle, Nomura’s head of real estate and services had previously worked with Como’s project director Henry Tammoro and manager director Steve Root. “After Lehman was bought out by Nomura I got a call from Tony,” says Tammoro. “He said, ’have you taken your holiday yet? Because if you haven’t, take it now as I’ve got a job for you’.”

They then began to look at potential offices, and assess them for suitability and how long they would take to fit out, finally settling on Angel Place, next to the Thames at Southwark bridge for its combination of size, flexibility and trading floor facilities.

The team had less than a year to design, procure and complete the fit-out. “All we knew was that there was a 550,000ft2 office and we had to accommodate 1,800 dealers and a total of 4,500 staff,” says Tammoro. “The bottom line was: that’s the brief. We had no idea what it was going to look like - all we had was the end date.”

A timescale like no other
Normally a fit-out of this scale would have a six-month lead-in period plus 18 months to do the work. The only way to get the job delivered this quickly and to the right standard was to get the right team. Bartle handpicked the team including architect TTSP, cost consultant EC Harris and Nomura’s internal IT team, who would need to work seamlessly with Como.

Everyone was located on site, which enabled fast decision-making and problem-solving.

“From day one it was important to get everyone together, including myself and the IT team,” says Toby Cordery, Bartle’s colleague and project manager for Nomura. “This helped us mitigate the risk of miscommunication, as you were 20 feet away from each other at all times.” This was particularly important, given that the design team was appointed at the same time as the contractor, which meant the design had to run in parallel with the building work.

Luckily the enabling works didn’t need any design input, so Como could commence this part of the job. This included procuring the big back-up generators needed to keep Nomura going in the event of a power cut - no small job, as these had enough output to power 1,600 homes. The enabling works also included extending the floorplates into two atriums to create more space. The designs for this had already been done by the base build team to make the building more flexible and appealing to potential occupiers.

Como was appointed to the job in September 2009 and was on site by October. A steelwork contractor was engaged to extend the floors into the atrium, and as the atriums were being dismantled by cladding specialist Gartner the steel was being fabricated. To speed things up Como erected scaffolding in the atriums so the steelwork specialist could start halfway up and work upwards and downwards simultaneously. “It went like clockwork and we actually finished ahead of programme,” says Tammoro.

Bite-sized chunks
The main fit-out started on 4 January this year. To break the huge job down, it was divided up into seven workstreams, each with its own project manager, construction staff and technical support person. Also, the job was configured as two phases, with the office areas making up the first, 400,000ft2 phase; this phase had to be completed by the end of August.

The second, 150,000ft2 phase includes less critical areas such as a gymnasium, an auditorium and dining areas. The first phase was also divided up, so different areas were progressively handed over to Nomura. The trading floors were the first area to be completed at the beginning of July.

With such a tight programme the team couldn’t afford to take the risk of a specialist going bust and delaying the job. Como ensured each trade was duplicated to guard against this. “We got three joinery companies because of the market we were in and the speed of the project,” explains Root.

“No one company could do it in the time available and we didn’t want to put all our eggs into one basket.” Como got each specialist to price for the whole job in case it had to take over another specialist’s work. It also broke traditional packages down into smaller chunks, for example the mechanical package was procured separately from the electrical package. The strategy paid off, as a ceiling contractor went bust. “If we had only one package it would have delayed the job by several weeks,” says Tammoro.

Technical challenge
One of the most critical elements of the job was the IT installation. Nomura needed this to be totally resilient, so all IT systems were doubled up in the building and further back- up with connections to two data centres was installed.

Because of the IT-heavy nature of trading operations there are 28 sub-equipment rooms that are some 210m2, and two even bigger main equipment rooms at 1,950m2. All the IT equipment and cabling, plus the external connections, had to be completed by 28 May so it would be ready for the first traders to move into the building on 4 July. The IT cabling was done at night, so it wouldn’t interrupt the other trades during the day. In fact, a major feature of this project was that work ran for 24 hours a day, seven days a week for some elements.

According to Cordery, the relationship between Como and his IT team was “second to none”. “If it hadn’t been like that then we wouldn’t be sitting here today,” he says.

Finishing touches
The standard office floors were relatively straightforward to fit-out as these had been fitted out to category A levels during the base build. All the lighting and air conditioning systems were stripped out and stored off site, the spaces reconfigured, then the lights and fancoil units brought back and reinstalled.

The executive areas were more involved, owing to the higher specification, so were handed over last to get this right. The doors, skirting, tables and console tables were all finished with a teak veneer. This had to be Forest Stewardship Council (FSC) certified to keep the building’s BREEAM “excellent” rating, which was a challenge as sustainable teak is hard to find. Finding FSC teak of the right quality was even more challenging as each sheet of veneer had to be handpicked. According to Cordery the team looked at 20,000m2 of teak veneer to source just 3,500m2.

Although it wasn’t part of Como’s contract, each trader’s computer was hand built on the premises and a photograph taken of their existing desk, so when they came into the new building on Monday morning it would be exactly as they left it prior to the move. The moves went seamlessly and Como is well into the second phase of the work. “We are extremely pleased,” says Cordery. “We are happy with the quality and that we got into the building when we needed to so the business has been able to operate uninterrupted.” And how does Como feel now the most difficult part of the job is over?

“It is the most ferocious programme I’ve ever worked on,” says Tammoro. “What’s scary is someone might want us to do it again. The trouble is if you’ve done it, once you’ve raised the bar, people will start to think it’s the norm.”

There are 2.5km of chilled desks on Nomura’s two trading floors at Angel Lane, making it the largest installation in the world. All the computing power needed for trading, which is considerable, is sandwiched between two desks placed back to back. The heat churned out by these computers is locally managed by a small fancoil unit, also placed between the desks. A manifold hidden in a cupboard at the end of each row of desks supplies the chilled water to the fancoil units. That means the main air-conditioning system only has to cope with normal levels of heat gain from people and the sun. This is provided using chilled beams.

LED lighting has been used on the trading floors as this is low maintenance and long life, which is important for trading floors. It is also cheap to run. There is 1.4km of linear LED lighting in the ceilings, which adds up to a total of 44,800 light sources. Given the sheer amount of lighting needed, the fittings were specially made for this job.

This article was originally published under the headline ’Speed fiends’