Over the line: How 21 Moorfields was built above a station

At 21 Moorfields, site constraints and client demands meant the columns supporting a new over-rail scheme would have to bear unusually heavy loads. When Robert Bird Group started pile testing, it was surprised to find it had opened a new level of development potential in the City of London. 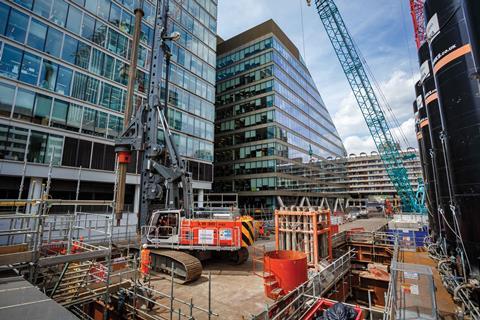 Drilling the bored piles for the testing

The key to unlocking development above London’s Moorgate station lies 50m below ground in the Thanet Sands. It is this 58 million-year-old geological formation of fine-grained grey-brown sand that engineer Robert Bird Group (RBG) has exploited to support some of the highest-loaded piles ever to have been sunk in the City of London.

These super-piles are what has made development of Land Securities’ 21 Moorfields possible. More significantly, the increased load supported by each pile has the potential to open up similarly challenging sites in the City by enabling developers to build higher and span wider than ever before.

The piles were developed by RBG as a solution to the challenge of creating a 60,000m2 air rights development above the tracks of the station’s three pairs of railway lines: the Circle and Metropolitan, London Underground sidings and City Thameslink sidings. In addition, there are two Crossrail tunnels passing beneath the site, 25m below the station, while a new Crossrail ticket hall is nearing completion at the site’s western perimeter.

When Landsec acquired the site the space above the station was occupied by three small office buildings constructed in the 1970s. These spanned the station, supported on rows of columns set into the middle of the passenger platforms and at the sides of the station complex. The developer wanted to demolish them and replace them with a single large office building, a concept that should have been relatively straightforward to realise. However, the existing columns were incapable of supporting higher loads, and London Underground did not want more columns cluttering its crowded platforms – or to have to close the station at any time during the redevelopment.

So how did the project team go about resolving this challenge? The answer was in a bridge structure – resting on the super-piles. 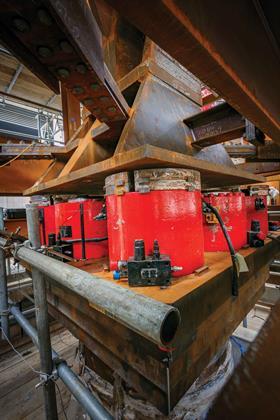 Piles at the perimeter

“The size of any building on this site is heavily constrained by where we can locate its foundations,” says David Seel, managing director (west) at RBG. The engineer’s solution to maximise the scheme’s footprint was to bridge 55m over the railway  lines with a steel structure supported on seven pairs of giant piles located at the perimeter of the station complex. “The only locations for foundations are on the north and south of the site, so you have to think about a bridging structure,” explains Seel. “Knowing that structure bridges the station means that pile capacity determines the size of the building you can put on the site,” he adds.

Although the developer originally wanted a single large office, it was assumed that the foundations could not support this so the initial massing for the project was based on two buildings: a taller one to the west, where there was more space and better access to install the piled foundations, and a smaller one to the east where there was less space and access was more of a challenge.

“When we did the due diligence study, we didn’t have any detailed geotechnical data for the site so we made assumptions about the ground conditions based on our experience of other sites we’ve been involved with in the area,” says Seel. RBG estimated the maximum load the piles could support would be 40MN (meganewtons). 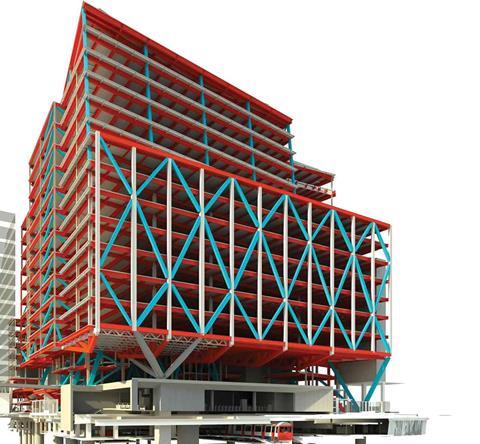 But while the initial design was still being finalised, Landsec was approached by Deutsche Bank with a view to securing the development as its new London headquarters. The problem was the bank wanted a bigger building – one with 20% more floor area than the one the design team had conceived and that the piled foundations could support. “Deutsche Bank wanted a bigger version of the building that had been envisaged, so we had to push the foundation capacity still further to help Landsec secure the deal,” says Seel.

The building could not go any higher because it would block out views of St Paul’s cathedral. “The only way we could get the floor area Deutsche Bank wanted was to abandon the two-building concept and go to a single big building,” explains Seel.

By now results from ground investigations had made RBG more comfortable about what could be achieved from the piles. Working with project architect Wilkinson Eyre, piling contractor Cementation Skanska, contractor Mace and geotechnical engineer Geotechnical Consulting Group, it developed a solution based on a single 16-storey building held aloft on just 15 piles, allowing it to span the 55m width of the station.

Most of the piles supporting the enlarged building are 2.4m in diameter. However, at the constrained eastern end of the site smaller, 1.8m‑diameter piles will have to be used, with the building’s height reduced accordingly at this end.

The piles extend 60m into the ground until they bed 2m into the stratum of Thanet Sands. Even after RBG optimised the building’s steel structure to minimise the weight of material used in its construction, the working load on the piles is a massive 65MN – by comparison, the working load on the Shard’s piles is about 30MN. “65MN is pushing into new territory,” says Seel. 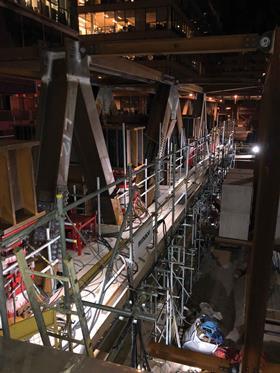 To confirm the piles’ performance under such large loads, a pile test was essential. A sacrificial test pile was created to substantiate the capability of the piles to handle loads at the level required to support the giant building. “One of things we had to do to be sure we could build the Deutsche Bank design was to do a pile test,” says Tim Hartlib, director of geotechnical engineering at RBG.

The test pile was installed in the one area of the site where there was space in the station for the additional pile and the reaction piles needed for the testing. The test pile performed far better than expected (see “Pile on the pounds”, previous page). The tests gave RBG confidence in its solution.

In addition to the tests RBG has undertaken, there have been three well-documented pile‑loading tests undertaken in central London – at the Shard, the Pinnacle and Moor House. However, Hartlib says that in all those schemes the tests were targeting the load-bearing capacity at the base of the pile, which means the test piles were sleeved for almost their entire length to minimise friction with the ground. At 21 Moorfields the test pile was not sleeved, which enabled RBG to monitor the ground’s reaction over the entire depth of the pile.

Testing: Pile on the pounds

To test the reaction of the ground to the loading that RBG’s pile design would impose, a sacrificial test pile was constructed on the site.

The pile was 1.2m in diameter – half that of biggest pile planned for the site. Extra-strong concrete and steel reinforcement were used in its construction to ensure that only the reaction of the ground was measured and not the structural performance of the pile. Four smaller-diameter piles, called reaction piles, were constructed around the test pile to support the test rig and take the loads imposed on the test pile by the testing.

Generally loads applied to the top of a pile are transferred by friction of the pile’s skin with the surrounding ground. The loads are first shed at the top of the pile and move progressively down the pile as the load is increased until the loads reach the pile’s base. 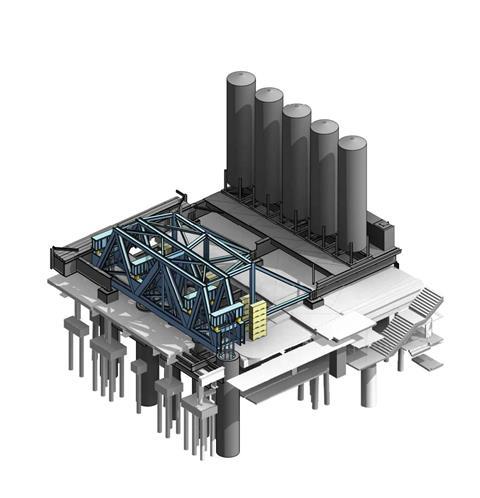 This diagram shows the piling test rig. The test pile is loaded up using jacks, and the opposite forces that this generates are transferred via a steel truss to four reaction piles

The test pile is monitored along its length using both strain gauges and fibre optics. The pile test takes place over 60 hours: the intention is to make the pile fail. At 21 Moorfields, the half-diameter pile was loaded in 5MN increments up to 20MN, which was its design load. The load was then released and reapplied, with this time up to 1.5 times the design load being applied to the pile. The load was released once more and then reapplied until it reached twice design load. “Up to the working load, we’d expect settlement of the pile to be relatively linear; at twice the working load we’d expect to see the pile start to fail, as the rate of settlement increases with every load increment applied,” Harlib explains. “We were expecting about 150mm-200mm of movement, when there was only 50mm,” he adds.

The instrumentation showed the reason for the ground’s improved performance was that the geological stratum overlaying the Thanet Sands, known as the Lower Lambeth Group, was behaving with a lot more strength and stiffness than conventional pile design would suggest. “Friction in the pile was taking a lot of [the] load which we had been expecting to be going to the pile’s base,” explains Hartlib.

The test pile was then loaded to 50MN – a loading of 20MN more than any top-loaded test pile had ever been tested to. At a load of 50MN the pile moved 78mm, so it was only just starting to fail. By extrapolating the data RBG could see that the pile would have eventually failed at around 70MN loading (3.5 times the design working load of the test pile) – a load higher than the actual loads imposed by the Deutsche Bank building, through a pile half the diameter of those being used. 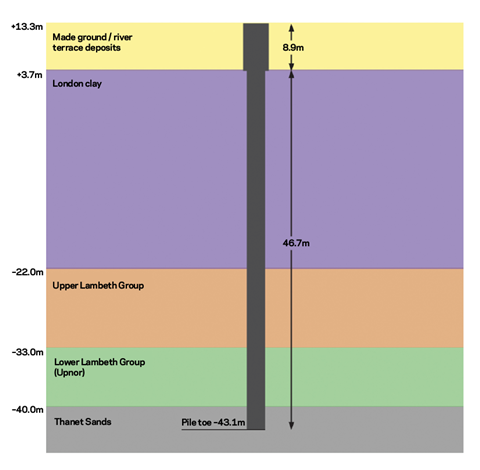 “This is the first time a full Thanet Sands pile has been tested in the City of London,” says Hartlib. “It showed that there is the potential to increase pile capacities for future developments, which is important when we are looking at more and more sites where there is very limited space for piling,” he adds.

This potential for greater pile loads applies only in the City of London, however, as it relies on the great depth of the Thanet Sands there. Hartlib says the performance of the Thanet Sands has been studied in detail at Canary Wharf but that the sand strata there is only about 30m below the surface, whereas in the City it is 60m down. “The strength of Thanet Sands for pile design is proportional to the depth of the Sands because its bearing capacity is relative to the amount of overburden– which is why capacity in the City of London is much higher than at Canary Wharf. 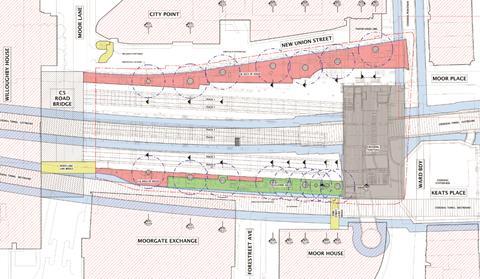 Diagram showing the proposed pile locations that will enable the building to span over the Crossrail and London Underground lines, and the station box

The scheme is on site now, with all 15 of the super-piles already constructed and installation of the building’s superstructure soon to commence. Just as in the test pile, each of the super-piles is fitted with strain gauges and fibre-optic monitors to enable the piles’ settlement to be closely monitored as construction progresses.

“We may get to the point where there is more capacity in the ground than we had previously thought, but that knowledge will only come from studying the information we get from doing these types of tests on other sites in order to build a more detailed picture of the ground capacity,” says Hartlib.

If the tests show the ground can support additional pile loads, then RBG’s work on 21 Moorfields could be the inspiration to free up the development of schemes on problem sites and over-rail developments in the City of London that, until now, it has not been cost-effective to develop.