The redevelopment of Edinburgh’s St James shopping centre with the addition of apartments, a hotel and retail is on a regal scale – but a distinctly small site 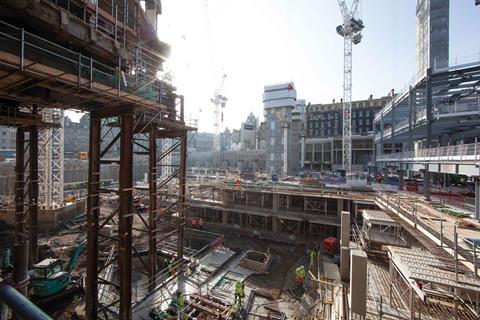 The Edinburgh St James site is in the city’s New Town area and is hemmed in by buildings, roads and people. The job is complicated by having to work around and under a John Lewis store that extends into the site (on the left side of the image)

Rising above the polite Georgian terrace of Edinburgh’s New Town is a cluster of eight white tower cranes densely packed into a site where York Place and Leith Street converge. These cranes mark the redevelopment of the St James shopping centre, a tired and unloved brutalist relic of the early 1970s that is being replaced by a mixed-use scheme intended to revitalise this end of the city.

Developer Nuveen is investing more than £1bn into the new scheme, which has been christened Edinburgh St James. The gargantuan development will include 850,000ft2 of retail – equivalent to 21% of Edinburgh’s entire retail offer – as well as 152 apartments, a 244-room, 13-storey W hotel and a 75-room aparthotel. Controversially for a city-centre location with good public transport links, it will include three levels of basement parking for 1,500 cars, three times as many spaces as the scheme it is replacing.

Constructing this megaproject in the heart of Edinburgh on a site hemmed in by roads, buildings, shoppers, tourists and office workers is a challenge, as Laing O’Rourke’s Tim Kelly, the project director on this job, explains. “We are extremely tight and have very little room to move,” he says. “The excavation goes virtually up to the boundaries of the site, so we are building on every square foot that we have.” 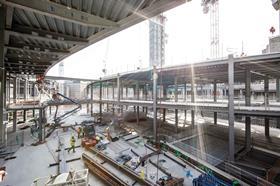 Parts of the job involve an unusually intimate relationship with a John Lewis store. The department store wanted to continue trading during the work despite the fact it extends right into the construction site. A crinkly tin partition is all that separated shoppers from the demolition of the building next door. Laing O’Rourke has also had to demolish some of the structure underneath the part of the store extending into the site and insert new columns, all while people continued to shop above. 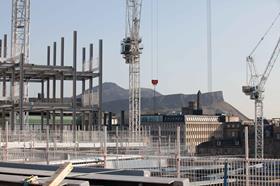 A steel frame is being constructed over precast concrete basement parking

Laing O’Rourke is delivering the project on a £475m design-and-build contract in 48 months. Work started in October 2016, with demolition followed by excavation for the basement. The job is now well into the construction phase with 10 cores distributed around the site almost completed. Work is taking place on multiple fronts. In some areas the precast system being used for the basement levels is being installed, while towards the perimeter on the north and east sides the steel frame is racing up, with the cladding installation under way at the York Place end of the scheme.

The work is further complicated by the topography of the site and the non-orthogonal nature of the architecture. The site slopes from the higher southern end, near where Leith Street meets Princes St, down towards York Place and Leith Walk. Architecturally the York Place and Leith Street side of the project is conceived as a sweeping crescent of stone-clad buildings intended to blend in more sympathetically with Edinburgh New Town’s polite Georgian crescents and sandstone facades than did the scheme’s concrete predecessor. An inner crescent of retail is separated from the outer by a street, while at the apex of the scheme is a cone-shaped hotel distinguished by a bronze-coloured ribbon of steel spiralling around the cone, terminating with a Mr Whippy-style flourish. 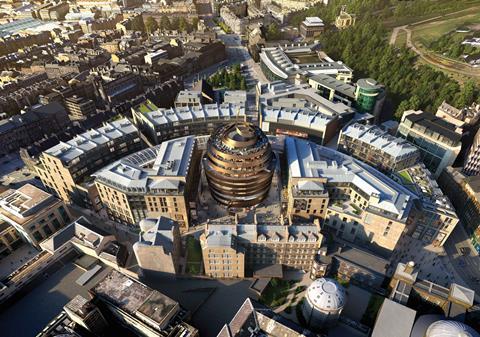 A visualisation of the completed project. It is designed to blend in with the neoclassical style of Edinburgh’s New Town and features a conical hotel in the centre

The complex geometry combined with the scale of the job and the constrained location meant careful planning and information management was essential. The approach adopted by Kelly has been to digitally engineer the job down to the last nut and bolt. This is combined with offsite manufacture, which helps address the tight site, improve efficiency and keep the programme on track. Kelly is evangelical about the benefits of digital technology. “It’s absolutely essential, I can’t see how it would have been successful without this,” he enthuses, saying once this approach has been adopted there is no going back to more traditional forms of construction.

A team of five full-time digital engineers are responsible for managing the digital model. They take digital information from the design teams and redraw this as necessary to ensure consistency and accuracy. The model includes information from the specialist contractors. Some of these, notably the glazing and structural steel specialists, had already become habituated to using 3D modelling but others don’t – for instance the blockwork and partitioning specialists. Laing O’Rourke had to create digital information for these packages from scratch up to a degree of detail and accuracy enabling the information to be used for construction. This means Kelly has a huge amount of information at his fingertips “down to how many nails we need to complete the job”.

Armed with this level of detail, the work packages are planned with the information in the model. “We solve as many problems as possible in the model,” explains Kelly who says that everything is built twice, once in the model and once on site. “Once we get on site we just get on and build it without going backwards and forwards with the designers.” Once the work is completed it is surveyed and the model updated to take account of any changes made during construction. This ensures there are no problems with follow-on work caused by out-of-date information. 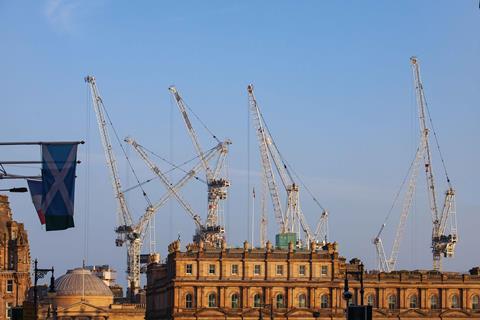 The extensive use of offsite components necessitated the use of eight cranes, including one of the biggest in the UK

One of the most complex tasks was demolishing the lower part of the four-storey John Lewis store that extends into the site. Its lower two floors had to be demolished to allow construction of the basement below and the new superstructure above it while keeping the store operational.

The first task was to construct a secant piled wall under the structure to form the basement perimeter. Then steel trestles were constructed around the existing columns with steel beams spanning between the trestles to support the edge of the existing first floor slab. Gripper plates, which are supported by the trestles, were clamped onto the existing columns to take the loads of the floors above while the columns below were demolished. Loads from the columns were transferred to the trestles using hydraulic jacks, then the old columns and retaining wall were demolished and the basement excavated. Once at the lowest level of the basement, piles were constructed to support new columns, pile caps were cast and new steel columns erected. With the new columns in place loads could be transferred from the trestle structures to the new columns and the trestles removed.

To manage the risks associated with this part of the job, the project team decided to use the 3D information to create a video detailing the construction sequence. This prompted them to change the process six times before they were satisfied they had devised the optimal methodology. The video was also used to reassure John Lewis the work did not pose any risk to its store’s operation. “We’ve broken the process down so anyone can understand it – the client and people who don’t understand engineering,” says Kelly. 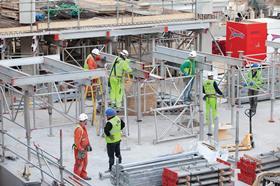 Workers erecting temporary supports for the precast lattice planks used for the basement construction. Reinforcement is placed over the planks followed by concrete, once this has cured the supports can be removed

The 3D information is used for all parts of the job, including apparently simple jobs such as casting ground floor slabs. “We got half a dozen construction managers in a room to explain how this should be done and they couldn’t agree on a way of doing it,” explains Kelly. This prompted the team to define a single way of casting the slabs. Why were they keen to do this? “The workers could go through four or five sectors working with different supervisors each time,” answers Kelly. “We wouldn’t get the quality and efficiency that a single optimised process brings. It’s all about introducing a manufacturing and assembly line mindset to the job.”

The process is communicated to workers using simple pdf worksheets with a set of step-by-step instructions that can be downloaded onto an iPad. “It gets us away from those 30-odd-page method statements. This explains in a few words what needs to be done,” says Kelly.

The reason why there are so many cranes on this job is because Laing O’Rourke is maximising the use of offsite manufactured components to increase construction output on the constrained site. This includes a mighty Terex CTL 1600 luffing jib crane with a lifting capacity of 66 tonnes and a 75m-long jib. One of only two in the UK, it is essential for lifting the heavy precast concrete columns and lattice planks for constructing the basement, the prefabricated service risers and horizontal modules – up to 12m long – and the prefabricated transformer rooms. Kelly says that about 35% of the scheme is being undertaken using offsite techniques.

The highly digitised nature of this job combined with rigorous advance planning means all the crane movements have been worked out in advance according to the programme. “This means the cranes can all be utilised rather than trying to prioritise crane movements on a daily basis,” explains Josh Murray, Laing O’Rourke’s group director of human capital, corporate affairs and the office of the CEO. “It’s such a safety benefit if the lifting programme is predetermined in advance.”

The progress of every precast panel through the factory and its whereabouts during the journey from the factory at Explore Industrial Park in Nottinghamshire to Edinburgh is known, says Murray. As the lorries arrive, their contents are checked and approved. 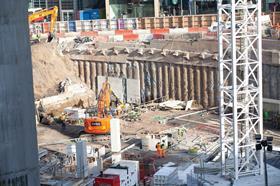 The excavation goes right up to the perimeter of the site

The cladding system neatly encapsulates how this rigorous construction approach comes together on site. The cladding system consists of a combination of precast panels, which are faced with stone or made from reconstituted stone to help the scheme blend in with the architecture of Edinburgh’s New Town area. It was imperative that each panel lined up perfectly with its neighbour to help maintain the illusion that the shopping centre was traditionally built. However, it is difficult to get concrete products millimetre-perfect as concrete shrinks slightly when it dries, meaning each panel is a slightly different size.

So the size of each panel is checked when it arrives on site and the digital model updated with the actual dimensions of the panels. Armed with this information, the panel configuration can be test-driven in the model to get the right combination of panels and spacing to ensure the sightlines along the joints look perfect. This saves having to work out the best panel combination by physically manoeuvring these into position, a job that could be time-consuming.

This approach has paid off. There were no complaints from John Lewis during the delicate demolition and reconstruction works under their store, and the rest of the job has so far gone as planned. “The amount of work we’ve had to redo is minimal; we’ve haven’t had to redo a single column,” beams Kelly. A more traditional approach would have taken a lot longer and been less productive, he says. He cites a benchmarking exercise performed on earlier jobs using this approach, which demonstrated a 40% increase in productivity. A remarkable achievement, this signals clearly the direction UK construction needs to take to ensure it has a prosperous future.