Sunderland’s first spec office scheme in 40 years has been built to a tight budget of £20m and sits alone, so far, on a vast site to the north of the city centre. Ike Ijeh looks at whether it can help kick-start regeneration 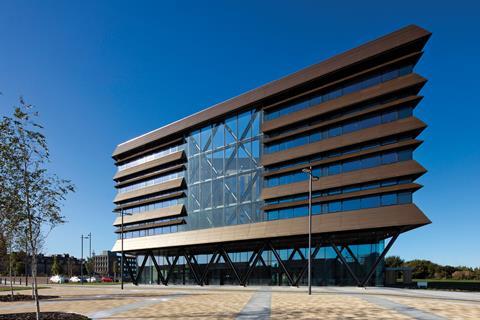 If any one city has emerged as a definitive example of the fraught polarities of Brexit since Britain voted to exit the European Union, it is Sunderland. With almost 62% of its electorate voting to leave the EU in 2016, and as the first city to declare a leave vote on the night of the referendum, Sunderland provided one of the biggest urban majorities in favour of Brexit and exemplified the swathes of northern towns and cities that voted leave.

Sunderland, like many northern cities, has been grievously undermined by decades of deindustrialisation and chronic economic disinvestment. Moreover, Sunderland owes much of its economic livelihood to the now-infamous Nissan car plant, whose very existence its electorate has supposedly threatened by supporting Brexit.

The city council has embarked on an ambitious 15-year regeneration plan to transform the city centre. A new office block to the north of this area marks the first phase of this venture and, in a sobering reflection of the scale of the task, forms the first speculative office built in Sunderland in the past 40 years.

The Beam is a six-storey, £20m office block that provides 59,427ft2 of grade-A office space and is hoped to mark the start of Sunderland’s long-awaited commercial renewal. Designed by architect Feilden Clegg Bradley, it has been built on the 5.5ha site of the former Vaux Brewery, which has been empty since closing in 1999 after 162 years in operation. The site has also been identified by the council as a key regeneration area and the location of its ambitious plans to extend the city centre northwards.

The Beam’s site was initially acquired by Tesco in the 2000s and has been the subject of previous masterplan proposals, including one by Piers Gough. But Tesco’s ownership was terminated after a series of lengthy legal battles ended with the site being sold to a joint venture between Sunderland city council, regeneration investor Igloo and Carillion in 2010.

An Urbed-designed masterplan was agreed in 2014, which incorporated Sunderland council civic offices by Faulkner Browns (now under construction beside The Beam), 250 homes and commercial offices, the first of which was The Beam.

A six-storey city centre office building on the riverside site of the former Vaux Brewery. Online grocery retailer Ocado is among the initial tenants.

The Beam has been constructed in what can be generously described as a challenging local market, as Sunderland city council project director Anthony Crabb explains. “To a large extent, Sunderland has lagged behind other commercial centres in the North-east – some of the regeneration that has been witnessed in Newcastle, for instance, simply has not been replicated here,” he says. “The city centre in particular has a number of problems, which we are now trying to address. As with many regional city centres, footfall is poor. There is a very low residential population. And until very recently, demand for offices was practically zero.

“The problem with Sunderland is that it’s a city that’s been developed like a suburb,” he adds.

The council’s regeneration plan aims to reverse this situation by doubling the residential population of the centre of Sunderland from 2,500 to 5,000 residents and increasing the number of people employed there by 50%, from 12,000 to 18,000 by 2030. Equally, it aims to increase commercial rents from around £15/ft² to £18.50/ft² or £20/ft² – still a fraction of values in London or even Newcastle but a totemic rise for Sunderland. The Beam is absolutely central to this strategy and has been designed with this testing commercial climate in mind.

Construction had already begun when Carillion collapsed in 2018. Crabb recalls a fraught and desperate period when the council lost “well in excess of half a million pounds” as the project stalled for more than six months. Tolent was eventually appointed as the new contractor and, when in 2019 Legal & General signed a £100m regeneration deal for the development, the city and masterplan were finally given the boost they needed. The Beam opened for business last month.

The Beam currently stands alone on a site sandwiched between one of Sunderland’s main arterial routes and the dramatic clifftop ravine of the River Wear. Three of the city’s most distinctive landmarks are close by, the steel and wrought-iron structures of the Wearmouth road bridge and Monkwearmouth Railway Bridge, and the truss stands of the Sunderland FC’s Stadium of Light, on the other side of the river. 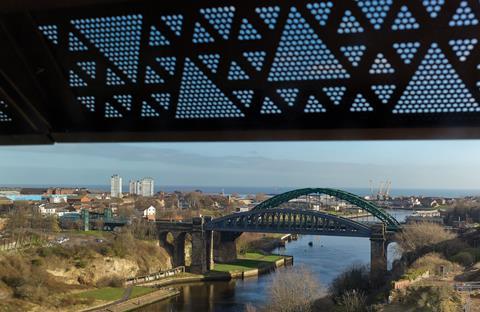 When the architects first came to design the building, the Vaux site was derelict and practically empty. The only nearby built form of reference was the Keel Line, a strip of granite embedded into the ground listing the more than 8,100 ships launched from the Wear.

As plans progressed, it emerged that the building was of a similar width to the beam of the Crusader

At 292m long, it is exactly the same length as the largest ship launched from the Wear, the Naess Crusader in 1972. The Beam is therefore a trapezium-shaped block aligned on the same axis as the Keel Line, whose entrance faces directly onto it. As plans progressed, it emerged that the building was of a similar width to the beam of the Crusader – and it was named accordingly.

The shipbuilding analogy does not end there. Feilden Clegg Bradley partner Simon Doody explains the building has been “meticulously designed to pay homage to the city’s culture, from the Wearmouth Bridge to the city’s maritime heritage”. 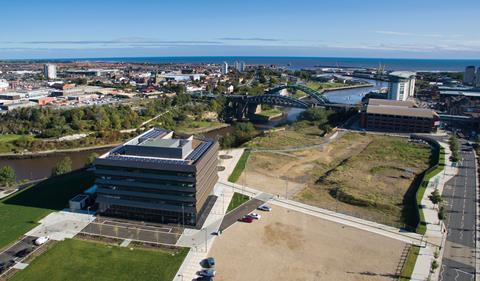 The Beam sits between one of Sunderland’s main arterial roads and the River Wear.

Accordingly, The Beam’s facades are conceived as a stack of swooping horizontal strips that alternate between ribbon windows and pleated “hoods” providing shade for the glazing below. Its bronze-coloured steel is a clear reference to the hulls of the ships and its horizontality and pointed prows are a reference to ocean liners. Additionally, the exposed steel cross-bracing evident in the entrance colonnade and behind the central glazed section of the entrance facade are inspired by the trusses of the two great arch bridges adjacent to the site.

Looking closely, a triangular pattern has also been subtly embedded in the fascias of the “hoods” and the soffit of the entrance colonnade. This triangulation is also partially inspired by the structural composition of a ship’s hull and forms a recurring visual motif inside and outside the building. Sunderland’s history of manufacturing stained-glass windows is celebrated at night by the “hoods” being dramatically illuminated by strips of recessed LEDs.

The building has been designed with Sunderland’s challenging office market very much in mind and this, according to Doody, imposed unique constraints on the design. “There is absolutely no way we could design this as we would a spec office in London or Manchester. Because there is virtually no city centre office market, the building had to be very efficiently done with a tight budget.

“So it has a number of unique features – it is low energy, has exposed services and structure, maximises daylight, is fully naturally ventilated, has high ceilings, is targeted at newer creative industries and has been very much designed with health and wellbeing in mind.” 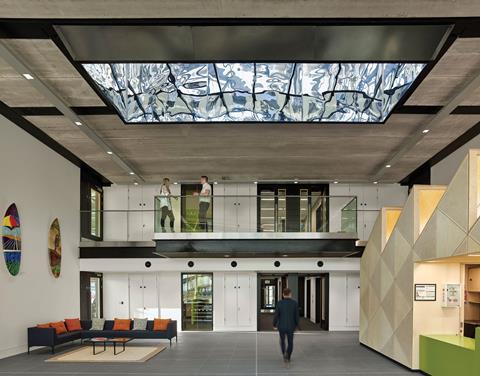 The entrance foyer features the simple detailing and exposed concrete evident through the interior.

The building’s simple structure reflects these ambitions. A steel frame has been used and a concrete core helps to provide stability, with additional stiffness created by the centralised cross-bracing visible on the entrance facade. Simple hollow core lightweight concrete slabs with extruded planking also offer structural efficiencies and budget savings.

This strategy is immediately aesthetically evident inside the building. The entrance foyer maintains the theme of efficient simplicity evident throughout, as a coolly restrained space with exposed steel and concrete elements. To one side, a reception desk is encased in a timber pavilion whose profile repeats the triangular motif evident externally. The space is awash with natural light from large floor-to-ceiling windows and from a large skylight centred on its ceiling.

On the upper floors, the building plan unveils a clever surprise. Above the foyer sits a raised internal paved courtyard set behind the large, cross-brazed glazed section at the centre of the entrance facade. Therefore the office floors wrap around three sides of this courtyard, virtually doubling the amount of daylight and fresh air to which they have access. With vines planted across its walls and the open-air seating offering panoramic views over the bridges and river for tenants, the space forms a key part of the building’s wellbeing offer.

The office floorplates themselves are sparsely appointed and can either be leased by a single occupier or subdivided into cellular tenancies. One distinctive feature is the glazing. Unlike current trends for floor-to-ceiling glazing in offices, here glazing only accounts for 40% of the facade to minimise heat loss while providing as much daylight as possible. 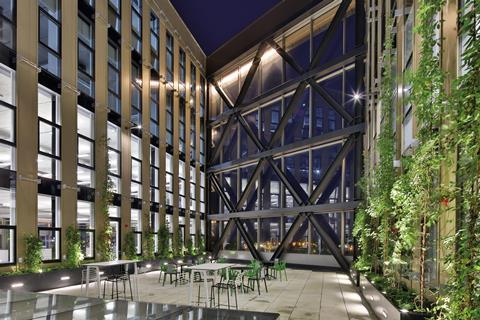 Consequently, each floor has two horizontal strips of glazing to the external facade (not the courtyard); a larger, lower band set about 900mm from the floor and a higher clerestory band just below the ceiling. Externally, both strips are topped with the hooded “pleats” to offer shading. All windows in the lower band are openable for ventilation; clerestory opening is mechanically controlled. Standard commercial radiators powered by conventional gas boliers provide the heating.

Whereas the office market in more prosperous cities is crammed with expensive, high-spec gadgetry, The Beam offers a lean, pared-down and convincing alternative. In so doing, it offers a highly attainable and sustainable office model also rooted in local urban context that could be used to galvanise regeneration in struggling towns and cities elsewhere.

And so far in Sunderland’s case it appears to be working, with online grocer Ocado already leasing The Beam’s two top floors. Crabb is hopeful about the city’s post-Brexit future. “Brexit could be a huge opportunity, there’s a real determination to make things work and we very much hope this development creates the critical mass that’s a sign of things to come,” he says.

However, despite Sunderland’s avowed Brexit allegiances, it is not so much the departure that is the defining issue here but the chronic disillusionment of the local community. After such a long period of economic stagnation and so many false regeneration starts on sites like the Vaux Brewery, many of Sunderland’s residents simply do not believe anything will ever change for the better.

These sentiments were caustically expressed during The Beam’s public consultation in an adjacent shopping centre, an experience Doody diplomatically describes as “bruising”. People were “far less concerned with the architecture of the building” than by a scepticism that the proposed investment in the site or in their city would ever materialise. But by symbolising just that, The Beam hopes not to just kick-start economic renewal but may reignite that crucial element without which no amount of regeneration or investment will ever succeed: civic pride.