With its power coming from geothermal energy and its buildings being ecologically sound, could a French water park, nestled next to Disneyland Paris, lead the way in sustainable mass tourism? 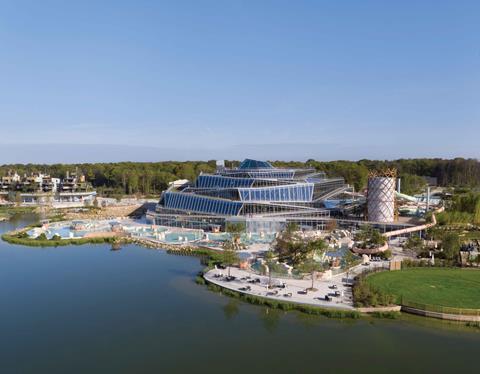 The Aqualagoon is the architectural highlight of the resort

Can mass tourism ever be truly be sustainable? And if it can, what role can construction play in achieving this? For the past 12 years these have been the core philosophical questions obsessing an iconic global leisure mega-brand whose name may not immediately spring to mind when contemplating sustainable development. And it believes it may have found the answer in a pioneering and highly experimental new holiday resort that has just opened 20 miles to the east of Paris.

To British eyes, the format sounds suspiciously like a Center Parcs. But this offer is different, for three reasons. First, UK Center Parcs resorts are owned and operated by a different company from those in Europe. Second, while the Center Parcs model primarily relies on visitors arriving by car, VNP makes use of established public transport facilities for nearby Disneyland Paris, as well as an electric bus system to take residents from the perimeter car park to the their accommodation.

The electric bus system is a clue to the third and most important difference. At Center Parcs the natural environment forms the chief physical characteristic and visual backdrop to the resort, but at the VNP resort nature and sustainability are embedded in the design, construction and operation of its buildings and attractions. As Emilie Riess, corporate and social responsibility manager at Group Pierre & Vacances Center Parcs, says: “It is a resort based on a positive vision of sustainability, where nature can be experienced in a completely accessible way.” 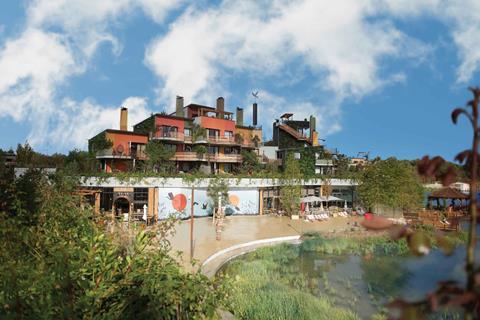 Eco on another scale

The idea of the eco-resort is hardly new, so how does this offering differ from others with similar ambitions? For Riess, the obvious answer is scale. Covering 250ha of former farmland, roughly the size of London’s Queen Elizabeth Olympic Park, VNP extends its sustainable agenda over an area few similar resorts can match.

VNP also identifies itself as unique by establishing a formidable list of sustainability attributes. Not only is 100% of VNP’s heating and hot water demand generated by a pioneering geothermal system that plunges wells 2km into the earth, but this same system also provides 30% of nearby Disneyland Paris’ heat energy. The developers claim this is the first time geothermal energy has been used at this scale in Europe.

This geothermal system also heats the covered water park, a striking pyramidal glass structure known as the Aqualagoon. At 9,000m² this is the largest water park of its kind in Europe and the geothermal heating ensures the water maintains a constant temperature of 30°C throughout the year.

Additionally, 97% of the 970m³ timber felled for the site was reused, and 98% of construction waste was also diverted from landfill. There is 4,000m² of new wetland, and 28,000 trees were planted in an area that also includes a farm, lakeside promenade, hanging gardens and a planted forest.

Much of the sustainability ethos of the development is also based on British principles, with Bioregional, the London-based environmental charity and social enterprise, acting as lead environmental consultant. The organisation is still housed in the ground-breaking 2002 BedZed residential development in south London, and it also co-developed the 2009 One Brighton scheme, which was then the UK’s largest car-free sustainable development and a model for sustainable community living.

Planet Living philosophy. This sets out 10 principles by which sustainable development can be achieved, and includes zero waste, zero carbon, sustainable transport and the enhancement of local communities. As Bioregional co-founder Pooran Desai puts it: “Villages Nature Paris is a British design framework given Franco-American expression.” 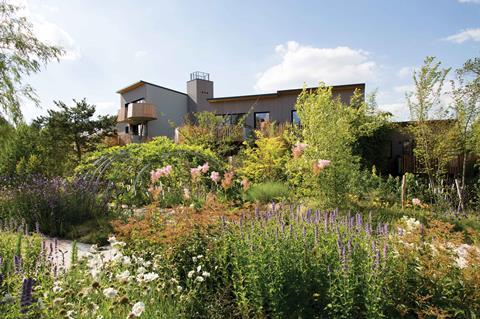 The biggest element of this expression in sustainable construction terms is the extraordinary geothermal network. Unlike London, Paris and its surrounding Île-de-France region is fortunate enough to sit on a subsoil layer 2,000m below the ground, known as the Dogger aquifer. Water at this level can be up to 85°C, a geological relic of the tropical temperatures prehistoric northern Europe enjoyed.

Île-de-France has exploited this subterranean asset by building almost 40 geothermal plants since the 1970s, supplying heating to more than 200,000 homes in and around Paris. But none have previously been conceived on the scale now installed under Villages Nature Paris.

The system works by a 2km-deep “hot water” well, which reaches the Dogger aquifer level. A series of pumps then channel the water back up to a geothermal plant built at ground level on the edge of the VNP site. Thanks to the hot aquifer subsoil layer, the pumped water reaches the plant at a balmy 78°C.

The water is filtered then pumped through a heat exchanger to heat the water circulated around the development. This is channelled through an 11-mile network of pipes 2m below the ground to provide hot water and heating. The hot water from the ground, now cooled to 35ºC, is injected back through a twin “cold water” well to the aquifer level.

The system is essentially a closed-circuit loop that replenishes every drop of water it extracts. To ensure there is no unintential heat transfer between the two wells, they are located 1.5km apart at the aquifer level before inclining to meet only 600m apart at ground level. The VNP system provides an impressive heating supply of 55GWh per year, enough to provide hot water to 5,000 apartments. By the time the water reaches ground level it has an enormous flow rate of 350m³/hr. To put this in perspective, an average fireman’s hose only produces 60m³/hr.

As well as providing a colossal amount of geothermal energy for VNP and Disneyland Paris, the benefit of the VNP system over many equivalent geothermal systems in London is that it does not require a powered ground-source heat pump. As London’s chalk and clay beds are much cooler and shallower than the Dogger aquifer, water extracted from London’s subsoil must first be heated before it is distributed for habitational use, a prohibitively expensive process were it to be executed on the scale of VNP’s network.

But, according to Desai, there are other infrastructural reasons why Britain is still some way behind France in exploiting the kind of geothermal energy gains witnessed at the new resort. “In the UK we still don’t have the business model we see at VNP, where the installer and operator of geothermal networks are the same. So heat networks in the UK aren’t joined up the way they should be, which means they don’t offer the same efficiency and cost-effectiveness we see at Villages Nature and other sites across Paris.” 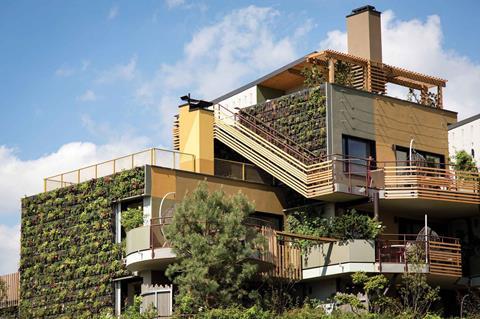 Elsewhere on the Villages Nature Paris site, sustainability makes its impact through the more conventional means of materials and construction. The covered water park, or Aqualagoon, makes extensive use of certified timber and low-carbon concrete, materials that feature repeatedly in the design of the accommodation buildings within the site.

The striking Aqualagoon has been designed by celebrated French architect Jacques Ferrier. Externally, its use of collapsing glass planes and a jagged profile makes for a discordant intervention among the otherwise bucolic landscape of log cabins and mono-pitch chalets. But its interior is a spectacular space, a tropical chasm bedecked with all manner of plants and flumes, and with its powerfully ribbed timber roof hoisted high above a forest of slender concrete columns.

Local materials are used throughout, with certified and often recycled timber, birch, cedar and oak on prominent display. The accommodation units themselves display extraordinary variety; one moment sleek cedar-clad family cottages, the next ziggurat-like timber cabins piled like treehouses, one on top of the other and linked by a series of external decks and staircases that extend precariously around and between structures, like rope bridges across a gorge. Despite many of the buildings being made from concrete frames clad in timber, the effect is an overwhelmingly organic one where, in the French tradition that stretches as far back as famed Versailles gardener André Le Nôtre, the architecture extends and adapts nature rather than serenely observing it.

But there must be more to sustainable mass tourism than construction alone, and Riess identifies wider principles enshrined at VNP that are key to ensuring that tourism leaves a positive environmental impact. “There’s no mass-tourism prototype,” she says. “You have to be receptive to local context and conditions. What works in France isn’t necessarily going to work in Sumatra. But there are consistent strategies; you have to involve the local community, promote small local businesses and offer training where necessary to ensure that the local supply chain has the skills to compete and doesn’t get left behind.”

Surprisingly perhaps, Riess maintains that part of this sustainable tourism strategy as enforced at VNP is supporting local rival tourist attractions so that the resort supports the wider community. Of course, not every resort will have the commercial heft of Disney behind it to support such civic generosity. VNP is clearly aware of its local pecking order; while its anticipated 1 million annual visitors is impressive, that number trails behind the 15 million who visit Disneyland Paris every year.

But VNP is providing a different leisure offering, one defined by ecological and sustainability concerns but not overwhelmed by them. For Riess, this distinction is important. “It’s fine if we attract eco-warriors but it’s not just about them. If sustainable tourism is going to have a mass appeal then it must also be accessible to those who are attracted to the nature narrative but aren’t exclusively driven by it.”

It’s a delicate balancing act but it’s a strategy that appears to be working with at least one set of lucrative visitors. For years the operators of Disneyland Paris have been increasingly baffled and frustrated by their singular failure to attract more nationals from Europe’s largest market, Germany. Stubbornly, Germans account for only around 1% of the park’s visitors. But while the Teutonic temperament is clearly unmoved by the celluloid charms of Mickey Mouse, it has proved considerably more receptive to the more tangible allure of serious environmental responsibility, with the proportion of VNP visitors who are from Germany topping 50%.

Is Villages Nature Paris set to force hotels and leisure resorts across Europe to ditch fossil fuels and plunge wells 2km into the earth? It’s unlikely. But could it introduce the themes of nature and sustainable construction as feasible marketing assets in a modern mass tourist market? Quite possibly. As Desai summarises: “Villages Nature Paris offers a tourist experience with no sense of guilt about damaging the environment or destroying the future for the next generation. We should be doing this in the UK.”