The enchanted forest: Vallecas-Pau in Madrid 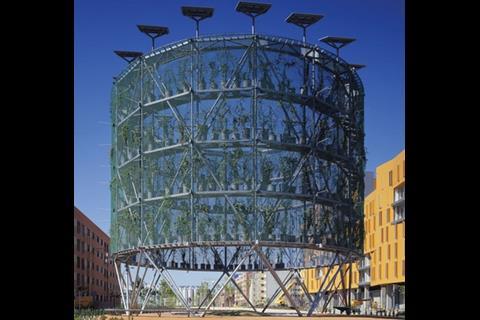 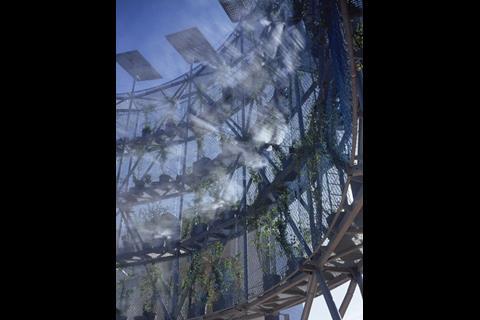 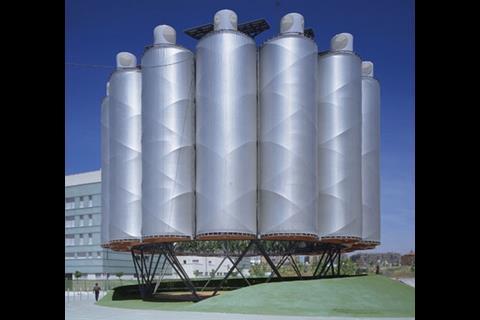 While Madrid’s new Vallecas-Pau suburb waits for its trees to grow, it has been fitted with portable tower parks. They look like this …

You are developing a huge satellite city of 20,000 homes, and you want to make it as natural and sustainable as possible. So you plant thousands of trees in all the public spaces. Instant greenery: perfect.

Except for one thing. Trees grow so slowly that when the development has its grand opening, it will look like it has been raining broomsticks.

To make sure that doesn’t happen in the new Madrid suburb of Vallecas-Pau, Ecosistema Urbano, a young architecture and engineering practice, has come up with a novel idea: an “eco-boulevard” of three “air-trees”.

Each air-tree is a huge steel-framed cylinder like a see-through gasometer. The difference is that instead of being plated in steel, a hanging garden of greenery is arranged over its four levels.

The air trees serve as green refuges from the hard cityscape, the swirling traffic and the summer heat for the inhabitants. As Belinda Tato, partner at Ecosistema, says: “They promote social encounters – otherwise there’s no reason why people should venture out of their flats and offices.”

Each air tree has a slightly different function. One encircles a play area for children. Another serves as a community meeting place with a projection screen. The third is more climatically controlled. It comes with an outer ring of 16 slender cylinders encased in silvery fabric and topped by wind catchers that direct natural breezes down into the cylinders.

The air trees are also equipped with an irrigation system for the plants and photovoltaic panels at the top.

Powered by the photovoltaics, water rising up through the irrigation system can be vapourised into a cool mist. Combined with the naturally induced updraught, the mist can reduce air temperatures in the cylinders by as much as 10°, according to Ecosistema.

The air-trees are intended as no more than temporary injections of greenery while the real trees planted all around grow to maturity. They will then be dismantled and reused in Madrid’s next new suburb. The empty space they leave behind will serve as a welcome glade in the wood that has grown up around them.