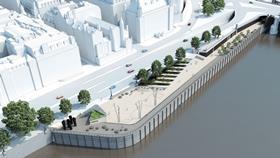 The packages awarded for London’s “super sewer” have heavily influenced August’s top 10 contractors table, with Laing O’Rourke and Ferrovial Agroman jumping to equal first place on the back of a £746m joint venture win on the mega project.

The 50:50 joint venture between Laing O’Rourke and Ferrovial Agroman was confirmed in August as the winner of the construction package for the central section of the Thames Tideway Tunnel by delivery consortium Bazalgette, netting each contractor a £373m share.

Meanwhile, Interserve entered the contractors table including civils in third place, and topped the table excluding civils. Major wins for the firm in August included a £20m contract to build phase one of the University Hospitals of Leicester NHS Trust emergency department at Leicester Royal Infirmary.

Fourth and fifth places in the table including civils went to Vinci and Costain respectively, with the two firms also boosted by securing a slice of the Thames Tideway Tunnel project.

The two firms have a 40% stake each in the contracting consortium that picked up the £605m eastern section of the project. Their joint venture partner Bam, which has the remaining 20% stake in the project, rounded out the top 10.

Returning to the table excluding civils, second place went to Wates, with a £202m contract haul. Major wins for the firm over the period included a £60m residential scheme for developer Anthology and a £42m office building for Great Portland Estates, both in London.

Galliford Try landed third place in this table with £171m of wins, the largest of which was £66m Birmingham office building 2 Arena Central, which will be home to HSBC’s retail banking headquarters.