A bit of BIM

In a crowded workplace, architecture graduates may find that knowing a bit about Building Information Modelling can make all the difference to getting a job 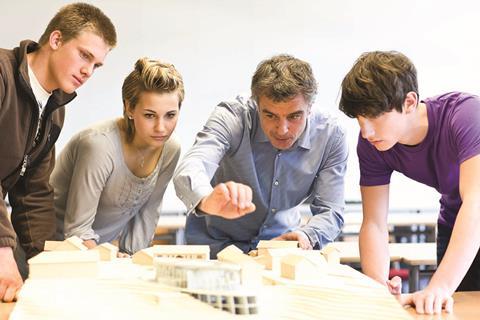 While the last five years have been tough for everyone in the construction industry, they have perhaps been especially hard for architects. According to the RIBA, workloads fell 40% from the pre-recession peak and staff
levels in architecture firms dropped by 30%.

And that 10 percentage point differential was and remains particularly bad news for recent graduates. In other words, there is still a decent amount of slack in the system and consequently few places for young architects seeking their first or second job.

So, given the scarcity of jobs, how can relatively inexperienced designers ensure that they stand out from the crowd?

One answer is building information modelling (BIM). According to Adrian Dobson, director of practice at the
RIBA, young architects with strong BIM credentials are currently finding it significantly easier to get their foot in the door than their less technologically-minded colleagues.

“Each generation is always more comfortable with new technology,” he says. “I think that it might not be the most rewarding work, but it could be an entry point to the profession. The older members of a team may not have those skills.”

So, how are UK architecture schools treating the emergence of BIM? How critical do they see it to their students’ professional development? And is this something that is best embedded at an undergraduate or postgraduate level?

We asked heads of three of the country’s most prominent architecture departments for their views.

Liverpool currently includes two or three lectures on BIM within its undergraduate programme and is launching an MSc in BIM in September, which will be available at both its Liverpool home and its London campus.

“At undergraduate level I think that BIM is an area that anybody going into the profession needs to be aware of and I think that’s true of nearly everyone in practice. Nearly every architect I know understands what it is and uses it.

“I think that people in the profession would benefit from doing our new MSc. We hope to attract people from quite a wide range of backgrounds who would benefit from knowing about BIM for their work. We expect that it will be mostly trained architects who will take the course, but it is open to engineers and other people. BIM is something that is blurring the boundaries between professions. At the moment it’s project planners and surveyors who are running the building process because they’re in charge of the money. But with this new unified system where everybody shares information there are possibilities for other people to take the lead in development. I don’t think that architects should miss that chance.

Some of them have doubled their wage by being BIM-literate

“Many people think that BIM inhibits the possibilities of design because it makes changes hard to make and it leads you down certain familiar design routes, but our BIM professor, Arto Kiviniemi, disagrees with that and says that you can use it in very creative ways. We hope that people who learn from him can learn to use it in a more imaginative way. It’s more a problem with the stage we’re at in the implementation of BIM than with the technology itself.”

Northumbria currently introduces students to BIM via training on software applications such as Revit or ArchiCAD. The school is currently considering how it can introduce a postgraduate BIM-specific MSc in the most effective “real world” way.

“In terms of employability, the students that we have who have done some Revit in their year out after their undergraduate training and have continued building on it in their Part 2, when they’ve gone out into practice they’ve tended to put anything between £10,000 and £30,000 on their wages. Some of them have doubled their wage by being BIM-literate. They’ve gone in as bright people who can help a practice to become BIM-enabled.

“From this year we’re doing BIM at an undergraduate level. For the past two or three years it’s been done at a postgraduate level. The reason for that is that really BIM and Revit are in the territory of production and we’ve been really careful not to use this software inappropriately. It’s a very powerful thing. If you’ve got a pull-down menu of different staircases it’s very easy for the student to just pull one off that is completely inappropriate for the sorts of projects undergraduates are doing.

“With Part 1 students we’ve thought long and hard about how we introduce it. We’re working on the premise that we do some introductory sessions of three or four hours when they’re timely for a project. So it is part of a module but it’s not a dedicated BIM module. However, the Part 2 students who have had a few years of practice, they’re designing their own components in among the suite of ready-mades. They can use it with some form of discrimination.

“We’ve already got a MSc in BIM that is generally aimed at construction people rather than architects. So what we’re considering doing is a MSc where we can get people who are working in practice and already have a pretty good knowledge of how the construction in industry works. That’s potentially more interesting.”

Head of Manchester School of Architecture

Firms want people who can make things happen, rather than operatives

“The question for architecture education is where you bring knowledge of BIM in. We do approach BIM from a theoretical point of view - it’s raised as a methodological approach - for our undergraduate programmes. So you can imagine a project where a group is working on a single entity that a BIM-type engagement is appropriate. But what we don’t say is “pretend you’re putting a building up. Pretend there’s a structural engineer. Pretend there’s a services engineer”, because what you end up with is a bad version of reality.

“Another challenge is that BIM is something that’s evolving because it’s still pretty new technology. So you could spend your second year learning the latest version of Revit and by the time you graduate the package will have evolved. I think that at one level firms can’t expect schools of architecture to train up students in every type of software that might be needed.

“We don’t offer any postgraduate courses in BIM specifically at the moment. We have groups of staff who are all engaged in high-level research in different areas and students then elect to engage with those research focuses, which run from heritage to the latest construction methods. And within that research area the necessary skills are introduced so that our graduates can go out and operate in an professional environment effectively.