As the London mayor’s chief of staff and planning guru, Sir Simon Milton has a lot on his plate: skirmishes over Crossrail, affordable homes targets, improving design quality, the recession … Still, at least his boss is a laugh 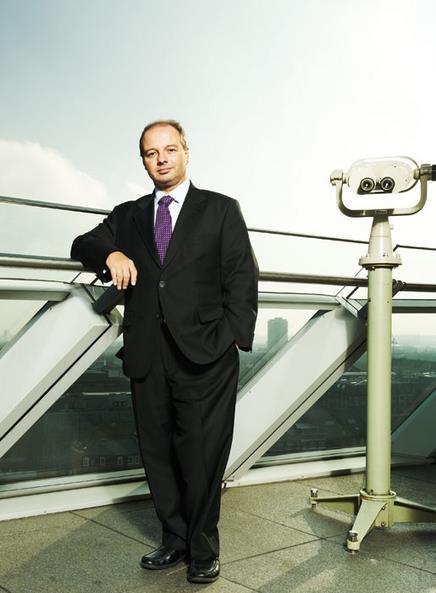 If Sir Simon Milton gets tired of being asked what it’s like to work for London mayor Boris Johnson, then he doesn’t show it.

For many years a powerful local government leader in his own right, it is striking how well suited this serious and quietly spoken politician seems to the role of trusted lieutenant, deferring to his voluble boss. “Boris is probably the most fun person I’ve ever worked with,” he smiles. “And it’s quite nice not having to make all the ultimate decisions.”

But don’t be fooled by his understated nature. Milton is a serious operator, and if you are a developer or builder in London then ultimately he’s the man you need to know.

Johnson’s closest adviser and chief of staff, Milton is also particularly responsible for planning and policy decisions. He covers everything from the mayor’s policies on tall buildings to the funding for Crossrail to the regeneration of the suburbs – essentially Johnson’s vision for the built environment. His number one priority is design quality – that the London of the future should physically and architecturally benefit from the development decisions of today. No matter what the economic climate.

“Boris’ legacy will be the creation of a distinctive architecture for London,” says Milton. “A kind of architectural vernacular, especially for housing, that is definitely London.” To this end, he is planning a new programme to fund design advice for developers to make sure they build better public areas, replacing former mayor Ken Livingstone’s 100 public spaces programme.

Milton understands how bad it is for builders right now. “The next two years will be very difficult – construction has stalled on many sites,” he concedes, citing the mayor’s 50,000 affordable homes target as a particular cause for concern.

But while he’s undoubtedly concerned about this drop-off in build, some builders may be concerned that quality, not quantity, is his main priority. Is he worried, for example, that Boris’ term of office may not even leave a built legacy in London? “Lots of planning permissions don’t get built in good times as well as bad times. I’m not too worried about it. Boris has been elected just as the economy has gone south – well, that’s just life, and we’ll just have to cope with it.”

Milton hasn’t always taken such a non-interventionist approach to politics.

He grew up an ardent Thatcherite in the hothouse atmosphere of Westminster council in the eighties. There he worked under Dame Shirley Porter, who for many symbolised the worst excesses of eighties greed and corruption after it emerged that the council had been putting welfare housing up for commercial sale to families thought more likely to vote Conservative.

Yet from these beginnings, Milton has emerged as a moderate, centrist, and widely respected figure, as well as being one of just a few high-profile gay Tories – his partner is Robert Davis, head of planning at Westminster council. In 2000, he became leader of Westminster council, which the Audit Commission has since acknowledged to be one of the best-run councils in the country. He became chair of the cross-party Local Government Association in 2007.

Since his latest move, though, his views – some would say principles - have shifted again. At Westminster, Milton campaigned against some of the charges the mayor was planning to impose on local businesses to pay for the £16bn Crossrail scheme – charges he is now supposed to enforce. So what changed his mind? Pure economics, he says. “I can’t take the same view now, because I’ve looked at the business case from the Greater London Authority and Transport for London’s points of view. I was speaking up for my patch, but clearly I now cover a different area.”

Milton last month emerged victorious in his first skirmish over the funding for the east-west rail link, using the mayor’s powers to refuse planning permission for the Howick Place building in Westminster because its developer refused to pay a Crossrail charge. It eventually gave in and offered £120,000 in order to get approval.

The £7.7bn London contribution to the funding package, to be raised in part from development and business rates levies, remains controversial, with critics branding it a tax on development just at the moment when the industry is least able to cope.

He is adamant the money will be raised and Crossrail will go ahead. However, he does accept the recession may mean it will take London longer to pay back the money it needs to borrow, meaning higher bank charges and ultimately greater expense for business and taxpayers.

The spat also highlights another area of inconsistency with his local government past – over planning. At Westminster he’d campaigned against Livingstone’s bid to take over planning decisions for “strategic” applications. Now he spends two hours a week with Johnson deciding whether to intervene in those very applications. He maintains his former stance was misunderstood – in practice Boris as mayor will take on no more than two or three applications a year. “I accepted there was a case for the mayor to have a say in planning applications that were of strategic importance. But what I felt was that the definition of strategic was far too loose.”

This discussion about planning leads back to Johnson. Milton claims those two hours spent making planning decisions on a Wednesday morning are the highlight of the mayor’s week. “He loves it. He absolutely loves it. He recognises that one of the things that most affects people is their physical environment, and he wants it to be as good as it can be. He sees his role as constantly pushing for better quality.”

Milton is suddenly animated. After a lifetime in local government, one gets the distinct feeling he has finally found his natural home. “I hope I’ve stayed true to my principles,” he says. Let’s just hope, whether he sticks to his principles or not, his policies lead the capital to start building again.

On towers
Boris has never been against tall buildings, nor have I. It’s always been a case of the right location. They should be on the basis of strategic planning, not on the ad hoc basis of a certain developers’ wishes.

On Parker
Morris space standards for private housing
There’s a very strong demand from boroughs for this, but my advice is we have to be careful not to close the door to
well-designed, innovative smaller scale housing.

On the cancellation of Ken Livingstone’s 100 public spaces programme
It wasn’t going anywhere. There were only ever five spaces – it was all hot air. We’ll soon be launching the great spaces initiative, which is going to be something the whole of London can participate in.