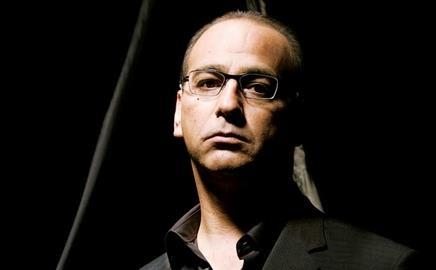 Theo Paphitis, millionaire, TV personality and dispenser of tough truths has one or two things to tell the construction industry about failure, self-knowledge and Prince Charles …

Murmurs of recognition are starting to ripple among corporate lunch parties as a smart man in a well cut suit hurriedly weaves his way through the bar. To the conference goers in the Hilton Metropole in Birmingham, it’s Theo Paphitis – star of Dragon’s Den, multimillionaire and a model of business success. He is also just another harassed commuter who’s come a cropper on the M1 – two hours late, flustered and profusely apologetic.

“I’m so sorry I’ve kept you waiting. Yum, is that cake? God, I need a coffee.” When his cappuccino arrives it is thickly dusted with chocolate powder and in a mug so large it requires two handles: “I made this for you myself,” beams the waitress. “With passion.” This is all in stark contrast to the tardy and unceremonious delivery of the teas requested before his arrival. “Bloody hell,” he says, taken aback. “What’s that? A gallon?” His surprise is surprising. You’d have thought the celebrity millionaire lifestyle would regularly get you coffee upgrades.

While Paphitis’ television work is what he is best known for these days, he is first and foremost a businessman. Worth £163m, the 50 year old has built up his fortune in retail and by turning around failing businesses such as Ryman and the “experience gift” company, Red Letter Days. Not bad for a lad who arrived from the Greek portion of Cyprus aged six and left his north London comprehensive with no qualifications.

Paphitis has a lot to say that is of interest to the construction industry, but perhaps the most reassuring points he has to make are that failure is normal, even necessary, and that individual difficulties such as dyslexia, and economic disadvantages such as recession, can be ingredients in eventual success. And if you don’t believe him, consider his own life so far …

I felt I could do no wrong. Anything I touched turned to gold, so why should this be any different?’ But it was different. the firm was crawling with fraud

Paphitis met with defeat early in his career. “I’m not talking about losing a button on my collar here,” he says. “I worked hard on a business that was knackered. I put it right but then I made an appalling acquisition.” Paphitis was 29 at the time and working for a leisure venue business called Pavilion.

The company he was charged with acquiring was Splash, a T-shirt designer. The deal involved raising £5m via a rights issue for working capital which Paphitis had no qualms about doing. “I felt I could do no wrong,” he says. “Anything I touched turned to gold, so why should this be any different?” But it was different. Splash was crawling with fraudulent activity and the deal almost brought Pavilion down. In his autobiography, Paphitis describes the situation as being like “sailing the ocean in a colander”. Every time he plugged a hole he found another. It became clear that Splash had no cash. Pavilion and Paphitis parted company.

Paphitis admits this was a blow. “The hardest thing to do is be honest with yourself when you’re wrong,” he says. “You can fool yourself better than you can fool anybody else. But what happened was my responsibility. I employed everyone involved with that acquisition and I had to come to terms with those mistakes.”

And he is not full of the “pick yourself up, dust yourself off” mantras you might expect. He says that, in reality, things are never that simple and people who think differently are either deluded or lying: “It annoys me when people say it because it’s not easy to do. I needed to work out exactly what went wrong to move on. So I spent six months on the River Thames, fishing. It wasn’t so much a trip as an exile. An exile to fish.”

Prince Charles was bloody right to step in. Thank god someone’s got some backbone

What Paphitis learned during his exile is what he believes was the key to his subsequent success. They are the three things he believes you need to have to make it – in any industry. And they are also the three things that can pull you back from the brink when times get tough: “First,” he says, “you need passion for what you’re doing or someone else who does will overtake you. Second, remember the harder you work the luckier you get, and third, have belief. Even if it takes six months to get it back. You need all of these things to succeed because without them you will feel every scar, trust me.”

This early failure, and his later success, have given Paphitis the credentials to be a business guru. But on the state of the construction industry today, his advice may not be what people want to hear: “It was the emperor’s new clothes. Some called it, sold landbanks and got cash in. Is that because they are cleverer than everyone else? Or is it because they said: ‘Shit, the emperor’s got no clothes on’? Denying this recession was like trying to defy the laws of gravity and I don’t care if you are the chairman of the biggest building company in the whole wide world, you are not going to defy the laws of gravity. People were on a merry-go-round and they didn’t get off. Here is my advice: You. Should. Have. Got. Off.”

Not that he is without sympathy for the companies that may have wanted to “get off” but couldn’t because of financial restrictions: “I’m sure there were some who got stuck. But there are many more who could have but who chose not to because they got greedy.”

Well, it’s all very well to say this 18 months down the line but hindsight is… “No, this isn’t hindsight. I got off exactly three years ago and so did a lot of other people I know. Those that didn’t are suffering.”

I think Chelsea Barracks was a prime example of what happens when architects are given too much of a free rein. They play to their own egos

Around halfway through his vat of coffee, Paphitis’ mood changes – perhaps it’s the caffeine: “Mind you, it’s not all bad news,” he says. “I don’t believe for one minute that the great British public have lost their appetite for bricks and mortar. Or ever will. It’s the British way. In other parts of Europe you leave home and you go and rent, even offices. But here it’s always been about owning your property, even in business.” He adds that companies should take advantage of good deals where they can – which is what he is doing with Ryman. “We’re picking up properties and shops in areas we couldn’t afford before now. Everyone should be thinking like this.” He adds he is particularly excited about the opening of the newest Ryman store next week in Cheapside, central London, which will bring the group’s total number of outlets to 240.

Paphitis is adamant that the recession should not be an excuse to curl into a ball and give up, but rather to look ahead. As an example, he refers to his work with the Carbon Trust – he was revealed as the backer of the Big Business Refit scheme in September. “I’m not a tree hugger. I don’t go around telling people they should give up their lifestyle to save the world. I am backing this because it’s an incredible business initiative.” The Big Business Refit aims to help small businesses replace their old equipment and machinery with new, more environment- friendly resources by offering interest-free loans of up to £400,000 out of a £100m pot from the government.

“When I saw the Carbon Trust was giving interest-free loans when banks aren’t lending, I thought it was a godsend. If I was a small business, I would be biting their arm off.” Backtracking somewhat on his earlier “tree hugger” comment, he adds:

I got off three years ago and so did a lot of other people. Those that didn’t are suffering

“Also, I do like the idea of saving the planet. It’s the only one we’ve got and my children are young and likely to be not very old when things go wrong. They’re little uns. Bless them.”

The time scheduled in for the interview is now up, but Paphitis is in no rush: “Keep going,” he says. “I have cake and I still have coffee. The cappuccino measure says we still have time.” And he has some thoughts to air on the Chelsea Barracks saga. “Prince Charles? He was bloody right to step in. Thank God someone has some backbone and moral fibre. He might be talking out of his backside for all I know but at least he’s saying what he feels and what he believes.

“Traditional and modern architecture are both fine in my opinion and they both have a place. I think Chelsea Barracks was a prime example of what happens when architects are given too much of a free rein. They play to their own egos. I am glad it’s been opened up to some new architects who will hopefully come up with something a bit more in keeping with the area.”

But Paphitis wants to finish on a positive note and refers back to his previous points that more often than not, success is borne out of disadvantage. “Hurdles like dyslexia, which I have, and a lack of academic qualifications, which I also have, are common among millionaires. The reason is simple. These are the people who, with some qualifications behind them, are bright enough to get a job in a big company and do very well. But nobody will hire them so they set up on their own and do exceptionally well for themselves instead. Millionaires are often millionaires because they had no other option.”

Paphitis in a minute

I couldn’t live without…
My family. Mrs P and I have three grown-up children, two sons and a daughter, and 13-year-old twin daughters.They think I’m desperately uncool: Oh God, everything to do with me at the moment in their eyes is like, eeuuggghhh. But when they want something, well that’s a different story.

The biggest problem we face is…
Public sector cuts. At the moment we have a deficit of something like £200bn a year, right? How are we going to pay it back? Now I’m just a poor little immigrant boy with no qualifications but even I know we have to do something drastic. How then, according to the present government, is it all going to be okay? It’s codswallop. Everyone knows the only way we are going to sort the £200bn worth of deficit out is to make £200bn worth of cuts. This will have a huge effect on the construction industry, as I’m sure it well knows. It’s a race for the work now, isn’t it?”

The thing that makes me feel the most guilty about my carbon footprint is…
I won’t be alive long enough to know whether I have made a difference.

I never leave the house without…
My mobile phone.

The best city in the world is…
London followed very closely by New York. When I go away and come back, I think London is marvellous and when I’m in New York, I love the hustle and I love the bustle.

My favourite building is…
The Chrysler building in New York

My least favourite building is…
City Hall. That turd that has been dropped on the South Bank.

Something nobody knows about me is…
I think about the previous day’s events when I’m shaving.