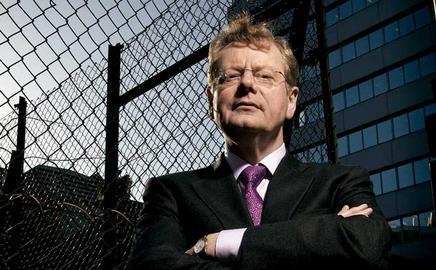 Richard Alderman is boss of the Serious Fraud Office, and he has the construction industry in his sights. Roxane McMeeken finds out how worried you should be

Richard Alderman has the power to listen to your phone calls, read your emails and even send agents to infiltrate your business. He is the head of the Serious Fraud Office, and he’s enforcing a tough new regime.

Alderman is determined to quash any notion that the SFO does not have teeth, an idea which grew after it did not investigate BAE’s Saudi Arabian arms deal. As such, the SFO has become more aggressive, taking full advantage of its previously little-used surveillance powers, like tapping phones and hacking into servers and even prosecuting British companies for crimes committed outside the UK for the first time.

If you’re wondering how this relates to you, well, Alderman has the construction industry firmly in his sights. In his 18 months in the job, he has already claimed some scalps, including Balfour Beatty’s, and he is just warming up.

Building went to meet him to find out how he will be fighting corruption in construction and how firms can co-operate with him, rather than get caught in his net.

Alderman is clear that there will be criminal as well as civil prosecutions. “We are investigating some huge cases and we are operating at the limits of complexity. Not all will result in prosecutions, but many will. People will know that a new SFO is doing this and they will sit up and pay attention.”

Alderman’s mind is sharp and he delivers his sentences with forensic precision. He is a barrister by trade, and you get the feeling you wouldn’t want to go up against him in court.

Alderman was previously head of special civil investigations at HM Customs & Revenue, where he ran inquiries into tax evasion and managed about 3,000 investigators. He says he took the job of director of the SFO because as well as having a desire to overhaul the body, “it’s the place where the biggest and most complex fraud investigations happen, and I’m very interested in fraud”.

He is scanning the construction industry for all types of corruption, but in particular he is scrutinising activities overseas, where it is easier and more common to buy connections and contracts. He has more than 80 companies on his radar at present, although he will not say how many are construction firms.

Alderman denies targeting the construction industry, per se. However, the first firm he has prosecuted for overseas corruption – the first in the SFO’s history – was a construction firm and this came alongside two other cases involving construction, which were settled on a civil basis. Although the investigations began before Alderman took over at the organisation, the cases are his work.

The first case came to light in July when bridge-building firm Mabey & Johnson revealed it would plead guilty to charges of corruption. The £55m-turnover firm has been fined £6.6m as a result. The charges related to activities in Jamaica and Ghana in 1993 and 2001, and applications for contracts under the Iraq oil-for-food programme. In Jamaica and Ghana the company admitted attempting to influence those awarding contracts in the countries, while in Iraq it breached United Nations sanctions forbidding trade.

Since then, Amec and Balfour Beatty have been fined. Amec was hit with a £4.9m fine for receiving “irregular payments” during the construction of the £1bn Incheon bridge in South Korea, while Balfour Beatty was stung for £2.25m following “financial irregularities” at one of its subsidiaries on a project in Egypt. The SFO deemed both firm’s activitives to be insufficiently serious to warrant prosecution, so both were able to resolve their cases on a civil settlement basis, and have pledged to ensure the activities in question do not happen again.

So how is Alderman catching those involved in corruption? The first technique, he says, is whistleblowing, which he has encouraged by setting up a hotline last December. “We have had 12 good ones this year,” he says. Again he will not say how many are in construction.

Then there are the SFO’s surveillance powers. “Years ago we were given tough, intrusive powers and before my time there was, I think, no use made of them whatsoever,” he says. “I found it very surprising that an investigative agency wasn’t using its surveillance and intercept powers and I said that must change.”

The powers include following people to gather evidence on who they meet and where they go, including taking photos if required, tapping phones, and accessing emails and other information held on servers. The SFO is also able to use “agents” who assume a different identity, interact with suspects and report back. If the SFO pursues these courses of action, it will work with the police, the Serious Organised Crime Agency and teams of external auditors.

The police provide transcripts of mobile phone and text conversations. To gain access to your computer systems, the SFO would get a search warrant and its digital forensics team would arrive in your office “lock down your PCs and retrieve everything”. Alderman adds: “It astonishes me how much information is retained on mobiles and other places you would not expect. And it amazes me what people think we cannot retrieve.” Material obtained in these ways is admissible in court.

As tough as this all sounds, Alderman wants to stress that he would prefer to tackle corruption in a friendlier way. “We want to encourage people to come and talk to us,” he says. He wants to talk to whistleblowers, but also companies that may be unsure about what constitutes unlawful activities. He also welcomes companies that know they have committed such activities in the past and would now like to report them and pay the price – which will be lower because they have come clean.

This was the gist of a letter Alderman sent to 100 construction companies following the Mabey & Johnson case. Alderman says the 100 were chosen only on the basis that they had similar businesses to Mabey & Johnson and the move was aimed at opening a dialogue with them and raising awareness among the wider industry. The letter drew attention to the case and pointed out that early reporting would be rewarded. Alderman says: “We wanted to show that the new SFO wants to offer help at an early stage rather than come along later and tell you you’ve got a problem.”

But in such a tough economic climate, is it right to add extra hurdles for businesses, especially if they are competing in an international forum against firms from other countries that are less restrictive? Alderman says: “I regard part of the SFO’s objective as being to support business. If our companies are losing out because there are companies in other countries that are much less scrupulous, I would like to know, because there may be things that I can do about it.”

The SFO already has jurisdiction over foreign companies if they commit offences in the UK. Next year, when the new bribery bill is expected to come into force, it will have jurisdiction over the UK operations of any foreign corporates it finds committing bribery anywhere in the world. However, the fact remains that if a company has no UK connections and is bribing its way to contracts above the heads of British competitors, little can be done.

But anyone who feels that the only way to compete abroad is to engage in corrupt activities should not expect sympathy from Alderman. Over the next few months he plans to make examples of the firms he finds have done wrong. Sources close to his investigations say the storm some of the results will cause will make the recent OFT inquiry into bid rigging look like a summer breeze.

Why is construction prone to corruption?

Alderman says: “It is a risky sector – not the only one, but it is among the risky ones. It’s competitive, there’s lots of money changing hands in lots of jurisdictions, the contracts are high risk too – we know how low margins are.”

Alderman is less worried about larger companies operating abroad, which have the resources to employ lawyers to advise them on the law, than he is about smaller firms. “It’s unrealistic to think they have access to top level advice and I am concerned they may not know about the law.” He adds that he is trying to find ways to reach small and medium-sized companies.

But tough economic times mean corruption is rising. “There is a temptation, where a contract could mean the difference between life or death to the company,” says Alderman.