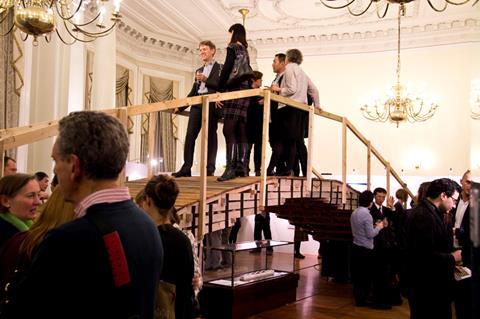 Guests on replica bridge made by architecture students at Kingston University

Earlier this month Kingston University students took over an entire room at the Japanese embassy in London with a giant bridge. Here they recreated a 1:3 scale version of part of the Kintaikyo Bridge in western Japan. Members of the public were encouraged to climb on to the bridge and experience the confusing sense of being at the same level as the elaborate chandeliers in the embassy’s foyer exhibition space. The Japanese ambassador, Keiichi Hayashi, was one of the first to climb the replica bridge when he opened the exhibition.

The Kintaikyo - also known as the Brocade-Sash Bridge - has been immortalised in woodblock prints by some of Japan’s leading artists. Its five-arch construction was developed in response to the potentially destructive forces of the Nishiki River. The design was, in the 17th century, a technological breakthrough as it used fewer materials than other building techniques to span great distances.

“Because the small components of our bridge could be cut by hand, there is very little waste,” explained Kingston University architecture lecturer Tim Gough. “Architects today need to consider their use of resources more carefully, and so the students were encouraged to make their work as efficient as possible. The Japanese craftsmen worked with this ethic and it remains an important lesson for our students today.”

His colleague Takeshi Hayatsu, who is originally from Okayama in Japan, contacted the Kintai World Heritage organisation in Japan to let them know about his students’ plans to build a replica of one of the arches. He said: “They supplied the students with access to their archive of historic drawings, plans and photographs to help them with their work.

“In a time before mechanisation, the original Japanese craftsmen were working by hand without modern tools and techniques. The original 17th Century design is a great example of architectural innovation because subsequent repairs and rebuilds over the centuries enhanced and simplified the magnificent structure each time.”

The architecture students were given 10 days to make all the pieces in the workshops at Kingston University’s Knights Park campus.

The exhibition formed part of both Asian Art in London and the International Architecture and Design Showcase 2012 in collaboration with the British Council and the London Design Festival. The bridge has now been transported to West Lexham, an ecological education centre in Norfolk.