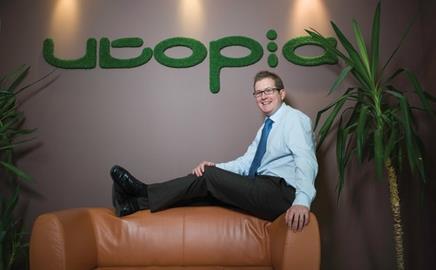 Open heart surgery, two pacemakers and various ailments are enough to stop most people in their tracks – but not Utopia founder Kevin Mashford.

Saba Salman finds out what drives him

It was on a beach holiday in the Seychelles that Kevin Mashford was inspired to launch his own interiors company. Gazing at the stunning landscape, Mashford dreamed of a firm that could create the perfect environment in the workplace, and wrote the word ‘utopia’ in the sand to reflect his vision.

Five years on and Mashford employs 25 staff across his two companies based in Exeter and Bristol: specialist contractor Utopia Works; and interior design and build contractor Total Utopia. The joint turnover will be £7m this year and its reputation is growing fast – major recent contracts include a high-specification refurbishment of the Exeter regional offices of international engineering consultancy EC Harris.

Mashford’s achievements are all the more impressive considering he has a congenital heart problem and launched Utopia after his fourth set of open heart surgery in 2004. He has had two more major surgeries since, numerous other smaller operations amounting to 12 procedures in total, and has been through two pacemakers.

But rather than holding Mashford back, his condition has served to drive his ‘can-do’ attitude. “My dad always said, ‘This is never going to stop you from doing anything’. He took me to karate when I’d just recovered from my first heart surgery at around eight years old,” recalls the 32 year old. “He just said, ‘Why not?’”

It was during one of his many stays in hospital as a child that Mashford began sketching buildings and became interested in design. Although he missed a lot of school, he did an HND in mechanical engineering, as well as an apprenticeship in mechanical engineering. He admits: “As soon as I got on to a scheme, I wanted to be out of the overalls.” Roles as a design engineer, project manager and operations director followed, until he secured the startup investment needed to launch his own company.

Mashford’s attitude to his medical condition is pragmatic. He refers to a recent incident when his heart began beating 200bpm as “a bit of a wobble” because he has lived with it for almost as long as he can remember. If he gets frustrated by his condition, it is because he feels he should be hands-on at the office, or at home with his son and wife, who is expecting their second child in October. “It’s the frustration of what I should be doing or focusing on that affects me,” he says.

The heart condition has forced the company director to be more efficient and forward-thinking. Once, for example, when a contract soared overbudget while he was away, he returned with a determination to make Utopia’s systems watertight. “Anyone can go into our files, they are all shared, so someone else can pick up the project. It runs the business more smoothly and, from the client’s perspective, there’s continuity.”

Another secret of Utopia’s success is the company’s motto of ‘no surprises’ and the promise of transparency in financial reporting: “Our approach is straightforward and logical – treating clients as we would like to be treated, with respect. We tell our clients on pitching that they’ll get fully detailed schemes, presented in a shopping list format, and they can pick and choose from that. Any variation they request, we report on a weekly basis, and will only do it if we have priced that variation and the client has signed off on it. At the end of the job, there are no surprises.”

Looking at industry-wide issues, Mashford is aiming to tackle the skills shortage. In a recent National Specialist Contractors Council (NSCC) State of Trade Survey, for example, 40% of respondents said labour shortages meant they could not bid for work. Utopia already takes interior design students on placement, but the former apprentice has plans to get involved in local project The Park, a scheme where construction and property offer disadvantaged teenagers work experience and apprenticeships.

The other big issue of the moment is the economic downturn – not in terms of a drop in contracts, says Mashford, but in cashflow. Getting paid by main contractors in particular is disgraceful. The current average wait for payment, according to the NSCC, is 30-60 days.

Mashford backs the NSCC Fair Payment campaign, which AIS was instrumental in launching, and says that subcontactors must have more power to determine payment terms up front.

“There should also be somewhere contractors can go if they have a good legal case to claim payment back – and there should be funding for that. The main contractors know they have the cash and subcontractors don’t, so it’s a case of David and Goliath.” The Utopia shopping list approach to instructed variations is a simple safeguard.

Next year, Mashford hopes to double the £6,000 Utopia raised this year for the Grown Up Congenital Heart Patients Association (GUCH) with a charity golf day. With a new GUCH ward planned once the Bristol Royal Infirmary is rebuilt, Mashford’s firm is also working on a space plan for the communal areas, free of charge. For now, he is preparing to move Utopia into new city centre offices with “the best interior in the city”. He adds: “My partner Dieter Wood and I successfully initiated a share buyback from investors and are now sole shareholders. We want to be regarded as the best fit-out contractor in the southwest.”

Based on his business so far, most people would be inclined to agree.