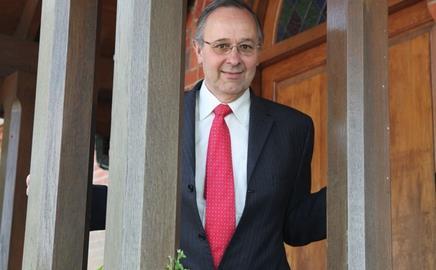 After being on the ropes at one of the world’s biggest contractors, David Fison moved to a small family firm. Here he tells Roxane McMeeken what happened, and how it changed his life

Despite spending three decades at two of construction’s big bruisers, Skanska and Balfour Beatty, David Fison is fitting in surprisingly well at family firm Osborne. He seems friendly and down to earth, smiling constantly, and there is a only a slight heightening of his hackles when asked about the lowest point in his career – being dismissed from Skanska last summer. It is just as well Fison has such a disarming demeanour because he wants to implement some of the big boys’ ways of working at Osborne, which will entail a bit of a culture change. Here he talks for the first time about the journey from Skanska to Osborne, and his plans for the medium-sized contractor.

Let’s start with what went wrong at Skanska. Although it was reported that Fison resigned from the Swedish transnational’s UK subsidiary in July 2008, he admits he was “asked to leave”. After he had spent six years in the chief executive’s chair, the contractor posted a £41.5m loss in the first half of 2008, mostly as a result of PFI hospital projects that went bad. This awful result came even though the firm passed the £1bn turnover mark in 2007.

It is clear the wounds left by this episode have not healed, but Fison wants to avoid recriminations. He says: “Some people might say, you took the rap for other people. But when you’re captain of the ship you must take responsibility if it runs aground. I was asked to leave but I fully expected it. If you’re not willing to live by your accountabilities, how can you expect other people to do so? And I do expect other people to live them.”

Fison says it was a tough time. “On a personal basis I felt awful because you let yourself down, you let the company down, you let all these people down.” But then he had something of a revelation. “You feel lousy but then you take stock.” The 57 year old says his goal was not to run any old huge company. “I realised I wanted to stay in construction – I could never work for a hedge fund, say – and I wanted to make a difference in the industry.”

This was both why he was willing to join a relative minnow like Osborne, where he was brought in as chief executive in January, and the board of the Olympic Delivery Authority, where his role is to advise on infrastructure (he was formerly head of rail and civils at Balfour Beatty). This expertise is useful at Osborne, too, which does rail and highways work as well as construction, property and housing. Yet a giant like Skanska is a world away from a £330m-turnover regional contractor. So how is Fison finding it?

First, the positives. “Everyone here has a bond to the family. The loyalty at a family firm can be hugely motivational. Coming from big corporates, I had no idea about that. I want to nurture and harness it.”

He says Andrew Osborne, the deputy chairman and son of founder Geoffrey Osborne, is “extraordinary – he knows 90% of the staff by name. He’s known many of them for 20 years”.

Client relationships are different, too. “We are much closer to our clients. We were on a school job and running close to the deadline and the client was getting nervous. Andrew came to a meeting and gave a personal guarantee that the family would not let the client down – it made a difference. You wouldn’t get that at Balfour Beatty.”

Some people might say, you took the rap for others. But when you’re captain of the ship you must take responsibility

Fison says Osborne also has a closer relationship to its subcontractors. “We’re not propping anyone up at the moment but I’m prepared to pay for their materials if we need to – it’s not about hammering subbies.”

But Fison has problems with other aspects of family business. “You have patriarchal behaviour. It’s great for looking after people, but it can also mean you end up putting up with people you would not put up with otherwise. I don’t think the patriarchal side should be an excuse for underperformance.”

Neither should the lack of external shareholders to answer to. “There is no grinding imperative to make 4% next year but at the same time we aspire to get a fair return for our work and for the family.” And that means the firm needs to “lift its game”.

Osborne made £2.5m on a turnover of £333.7m for the year ended 31 March 2009. This was a considerable improvement on the previous year, when it posted a £1.8m loss, but Fison is not satisfied. Next year he says sales will be down about 10% to around £300m. He declines to give a profit forecast, but says he is not planning to make further redundancies. Osborne has laid off 100 people during the past year, some under Fison’s watch, leaving 1,080 remaining.

Instead, Fison has streamlined the business, which had multiple divisions, into two streams, one covering construction, housing and civils, the other rail and property services. He says: “I came into the firm with a question mark around whether we should come out of some sectors. But I have decided against that because, although it means we carry slightly too high overheads, it does give us flexibility at a time when nobody can predict which markets are going to thrive over the next few years.”

Likewise Fison is sticking with Innovaré Systems, a business that makes structural insulated panels for affordable homes. Osborne invested £2m in the business, which mostly went into building a factory in Coventry, and this was a big factor behind 2008’s loss. A plc might have taken a look at the state of the affordable housing market and cut its losses by now, but Fison says that Osborne can afford to wait until the market comes back. When it does, he believes sustainability requirements will put Innovaré in strong position. Meanwhile he’s trying to sell Innovaré into other markets, such as student accommodation.

Fison also plans to instil the discipline and efficiency he was used to at Skanska and Balfour Beatty by standardising processes like programming and risk management. The idea is that if something is done well, it is recorded, understood and repeated. “Looking back at last year, if you removed the two or three really bad jobs we’d have doubled our profits. We must bring in the rigour of process and the discipline to manage those types of jobs.”

He also wants the Osborne family less involved in day-to-day matters. “How do we improve speed of action? At times we look up to the family a bit too much when we could make more decisions closer to the workplace.” Yet, because Fison wants to keep the “good aspects” of family business, a balance is needed. “I want to drive in more discipline and accountability but not throw out the family ethos.” Whether Osborne’s staff will fall into line remains to be seen. But if Skanska-style efficiency brings better results, Fison ought to win that argument.