Right man for the job: Mats Williamson of Skanska 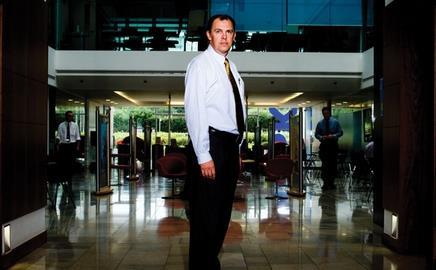 After last week’s interview with former Skanska boss David Fison, his successor Mats Williamson tells Tom Bill how he was flown in to drag the contractor back into the black – in just 12 months

This time last year, David Fison, the chief executive of Skanska UK, announced that his firm had made a loss of £41.5m, largely because of two PFI hospitals in the east Midlands.

The same day in Skanska’s Stockholm headquarters, the board held a meeting with Mats Williamson, the 51-year-old head of Skanska Sweden. He was given a simple task. “They told me we’d meet in 12 months, and the UK business would have returned to profit. It wasn’t specified how.”

That may sound like a good premise for a reality TV show, but nobody in Skanska found it entertaining. Fison went and Williamson arrived to bring the wayward UK operation to heel.

He had been in the UK several months earlier as part of a high-level group sent in to help the floundering subsidiary but when asked what went wrong with Fison’s regime, Williamson restricts himself to stating the obvious: “We took on too many risks and they materialised.” The discretion is characteristic: he may be 6’5”, but steps delicately around contentious subjects.

Others have been blunter, and blame Fison’s management style. One says: “Swedes take decisions before a meeting and only meet to ratify it in a way that appears consensual. When David was at Balfour Beatty he embodied that company’s hard-headed culture but became extremely deferential and polite at Skanska without understanding that decisions were needed. He became more Swedish than the Swedes.”

Another says Skanska lacked a succession plan after Keith Clarke, its previous chief executive, left for Atkins in 2003. “Keith was at the top of his game but that doesn’t mean he had a strong team around him.”

Williamson shakes his head at those claims and points out that Fison resigned. (The latter, in his interview with Building last week, said he was given no choice). He reveals a more steely side when asked why he was the best candidate for the UK job.

“There were others but I was the one who could give the biggest guarantee things would improve. With me there was a strong sense the status quo would not remain.”

When he arrived at the firm’s Hertfordshire office, his first move was to bring its operating units closer together and, more importantly, closer to him. He paints the picture of a loosely organised company where communication was irregular. “You had operating units out on their own and directors didn’t meet that often,” he says.

One ex-employee agrees more cohesion was needed. He says: “Skanska in the UK was born out of Trafalgar House, which had a dog-eat-dog culture.” By contrast, Williamson takes head office’s more enlightened view that one person’s problem is everyone’s.

And those risky projects? He picks up a business card and drops it through his fingers onto the table: this is what happens to a project that doesn’t hit obstacles. “We now have a project review team. If the project falls all the way to the bottom, you can do it. If it stops on the way down, you need to explain why it should go ahead.”

Those who know Williamson say he will go far. One says: ‘The jury is out on the UK operation but Mats is an absolutely top-drawer individual’

It has been an inward-looking first year for the man who, during his early career as a civil engineer, built the 16km Öresund bridge between Sweden and Denmark. Many have wondered how Skanska will react to getting so badly stung in the Midlands. The comeback, says Williamson, is continuing.

Skanska is still chasing Building Schools for the Future (BSF) projects, despite losing out to Kier on a £477m deal in Kent, which one source said “seriously hurt”. It has won a BSF contract in Bristol but still needs more sizeable wins to gain a decent foothold.

And is there life in PFI after the Nottingham and Derby hospital debacles? Or will Skanska retreat wounded? “No,” he says firmly. “There will be good opportunities.”

One fellow chief executive thinks he’ll have his work cut out. “They’ve lost ground in PFI and are up against highly competitive animals in Balfour Beatty and Carillion,” he says. Williamson only began plotting the future in recent months and will do no more than hint at what he’s thinking. For example, on UK infrastructure: “Given the time people spend in their cars, queuing, the water pipe leaks and the risk of energy blackouts, you need to invest.”

The only thing he can say with any certainty is that he’ll boost the company’s already sound green credentials. He reverts frequently to the mantra of green construction and draws on a piece of paper to show how the company will do more in the “super-green” sector; he adds that he has even introduced a green-only policy for company cars – even though “the green interest here is far less than in Sweden”.

Beyond that, he is in no rush to make decisions and clearly adheres to the “turnover is vanity, profit is sanity” school, despite acknowledging that the UK market has the biggest room for growth for Skanska outside the US. “You could argue we’re big enough as a global company,” he says.

Those who know Williamson say he will go far. One says: “The jury is out on the UK operation but Mats is an absolutely top-drawer individual. Skanska couldn’t have chosen better.” Even Fison acknowledges that he is a “great bloke”. He adds: “He’s very down to earth and probably one of the most respected and trusted top guys at Skanska.”

And those that don’t know him concede that Skanska has sharpened its act over the past year and is no longer “chasing everything”, which presumably relates to the business card trick.

So, after 28 years with Europe’s third biggest contractor, could Williamson eventually land the top job in Stockholm? Johan Karlstrom, the global chief, spent four years fixing North America before moving upstairs. “That’s not what I’m thinking about at the moment,” he says, adding that he’ll be in the UK for a few years yet. “Maybe that’s a difference in Swedish culture. People don’t say this or that will look good on my CV.”

Perhaps, but a resurgent UK business certainly wouldn’t hurt, nor will the fact that he last week announced a £15m profit.

Life in the UK

Lives In a rented Holland Park flat with his lawyer wife and grown-up son and daughter. "We furnished it in one evening at Ikea. It’s good they stay open so late here."

Misses "Being able to pitch a tent wherever I want in Sweden."

Watches Midsomer Murders. "It’s filmed nearby in Beaconsfield. I Googled it when I arrived."

Reads The Stieg Larsson trilogy. "As a Swede I have to say that, don’t I?"

Adapting to the English "It’s easy for a Swede to adapt to the way of working in the UK, it’s very similar to how we do business in Sweden. People are hard-working and like to have some fun along the way. The only thing is that there is a lot more paperwork here."