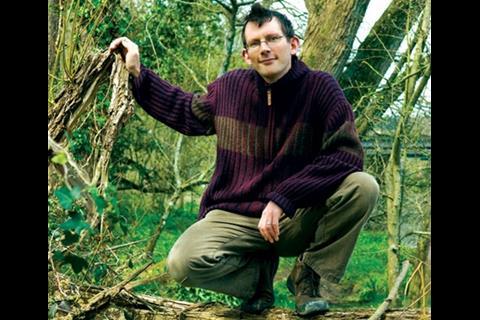 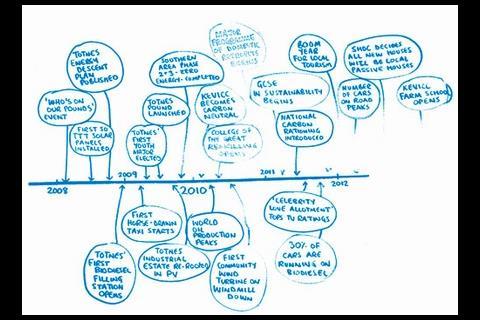 This diagram shows how Totnes might look in the future if transition principles are taken forward. It was a theoretical exercise as part of formulating an energy descent plan to 2030.

The era of cheap oil is over and our economic system is doomed, believes environmentalist Rob Hopkins. So is he gloomy? Not a bit of it. It’s such a tremendous opportunity.

2 May 2010. The world wakes up to news that the United States Air Force has started bombing Iran. With its country deep in recession, the US government needed something to divert attention from its domestic problems and Iran’s rapidly developing nuclear programme provided the perfect opportunity. But the plan quickly starts to unravel. A furious Iran suspends all oil exports to the West, as does its ally Russia. Anti-US riots in Saudia Arabia force its government to follow suit, a pattern that is swiftly repeated across the Arab world.

The oil shortage sees prices rapidly quadruple to nearly $500 a barrel. The price of all basic commodities rocket and stabbings at garages become a daily occurrence in queues for rationed fuel. A protest lobby calls for fuel duty to be scrapped, then blocks motorways when the government says no. The resultant panic-buying clears supermarket shelves and thousands are left without food. As fear grips the nation, one person remains calm. His name is Rob Hopkins and he lives in Totnes, south Devon. After all, he’s been expecting this for years.

This scenario may be fictional, but it has echoes of the 1973 oil shock. “There is a feeling we are coming to that time again,” says Hopkins who, at 39, just about remembers it first time round.

And he is well prepared if we do run out of fuel. Already his office, above a shop on Fore Street in Totnes, is barely heated and he wears a thick woollen jumper to keep warm.

This office is the nerve centre of Transition Network, a movement pioneered by Hopkins to help communities prepare for “the end of cheap oil”. Its message is that once the world hits peak oil production – that is, when there are no big reserves left to discover and supply is heading downhill – prices will rise uncontrollably, destroying in a stroke the foundations of the world’s economy.

“I think we are certainly within 10 years of the oil peak. Some argue it’s already happened. So we need to start thinking seriously about how we adapt,” he says, speaking with quiet, firm conviction.

“Our starting point is to help communities design a vision of where they see themselves in 20 or 30 years, in a lower energy context,” he says. The idea is to make communities resilient enough to withstand external shocks, be it food and materials shortage or economic mayhem.

The only way to do this is to produce as many things as possible locally, without relying on oil, says Hopkins. “Oil-reliant” products are generally manufactured on an industrial scale and shipped great distances. Post-oil building materials, in contrast, could include mud, straw, wood, cob, hemp and lime, grown, mined or processed by local people.

Post-oil buildings will vex tower-besotted architects. “We are probably at the peak of the age of enormous cement, steel and glass buildings,” says Hopkins. “They’re based on the idea of a continuing supply of cheap oil.”

Hopkins has chosen a pertinent place to base his movement. Just up the road is Dartington Hall, where, in 1925, Leonard and Dorothy Elmhirst founded a trust to try to halt rural depopulation by setting up schools, farms and factories all run on principles deemed progressive. The “Dartington effect” permeates the area. Totnes High Street is peppered with shops selling crystals, organic food and homemade shoes.

Our starting point is that it’s (peak oil) a tremendous opportunity rather than a crisis. Implicit within it is the potential for the greatest social and economic renaissance we’ve ever seen

Hopkins moved to Totnes from Ireland in 2005, where he had been teaching permaculture for nine years – a lifestyle based on creating sustainable human habitats in co-operation with nature. This is the philosophy that underpins the movement. Transition Towns Totnes, which he founded in 2006, is the first place in which Hopkins has put his ideas in practice.

He stresses that transition doesn’t begin with all the answers. It’s a starting point, a catalyst. A key part of the process is working out where the community wants to be when oil starts getting scarce and work backwards to see what needs doing along the way. Hopkins calls it a “community resilience plan” or an “energy descent plan”. This will be developed over the next 18 months to decide what Totnes should look like in 2030. A private grant will enable someone to be appointed full time to manage the process.

So has Hopkins’ movement instigated any change in Totnes, apart from a few nut trees being planted at the leisure centre? Indeed it has. Incredibly, Totnes has its own currency. Called the Totnes pound (pictured right), it has the same value as a pound sterling but can only be spent locally, keeping money in the local economy. It is accepted by 70 local shops and there are 7,000 notes in circulation. We’re not talking Monopoly money here – each note is individually numbered and has UV marking to make it less susceptible to forgery. A community-based provident society called Totnes Currency is being set up to run the scheme. At the moment it only comes in denominations of a pound but Hopkins says a five pound note will be introduced this summer.

In terms of property, a redundant milk factory could be the first big scheme to adopt transition principles. The 8-acre site next to Totnes Station is up for grabs and a local trust wants to develop it along Hopkins’ lines: a kind of post-oil mall with units for small businesses, food outlets, an arts and culture space and educational facilities. It would include housing to ensure the scheme stacks up financially and all the buildings would be constructed from local, low-impact materials where possible.

“It would be a fabulous thing for Transition Towns Totnes,” says Hopkins. “We want to do something radically low-carbon and really exciting with it.”

All these ideas have support from the local chamber of commerce, the town council and Devon council. Humphrey Temperley, executive member of the county council for economic regeneration, thinks it’s great. “I really do think the transition movement is good for Devon and the South-west and I wish we had more of this going on,” he says.

Hopkins’ ideas have reached even farther afield. Fifty places, including Bristol, Brighton, Nottingham and the Isle of Wight, have formally signed up to Transition ideals. More than 700 others are considering signing up across the world. Not bad for an organisation that relies entirely on social philanthropists and community funding.

Hopkins isn’t scared by the apocalyptic vision sketched above. “Our starting point is that it’s a tremendous opportunity rather than a crisis,” he says. “Implicit within it is the potential for the greatest social and economic renaissance we’ve ever seen.”

Let’s hope he’s right about that.

“My house is an unremarkable 1963 dormer bungalow which I bought because it has a south-facing roof and garden big enough to grow food. A friend who works at the BRE drew up a plan to make it energy efficient and I am slowly working through that. I spent half my Christmas holiday putting 400mm of insulation on top of the 100mm that was already there and I have put in a woodstove linked to a back boiler. I will put in some solar thermal panels in the next couple of months. My kids helped me get the garden started. My mission is for them to leave home knowing how to grow 10 different vegetables to a reasonable degree of proficiency.

“I buy organic food using the Totnes pound as a preference and try to eat seasonally where I can. I cycle to work and share a car, but I don’t use it much. I gave up flying two years ago and I usually take holidays in the UK or take the train if I’m going further afield. I don’t fly for work – I was asked to speak at a conference in Washington two months ago so I sent them a DVD of my presentation instead.”

Rob Hopkins will be one of 80 speakers at the Think 08 conference on sustainability in the built environment, ExCeL, London, 7 and 8 May - Think website