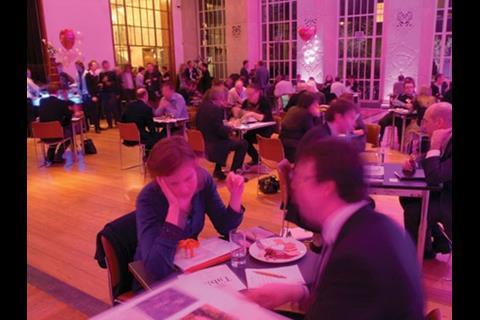 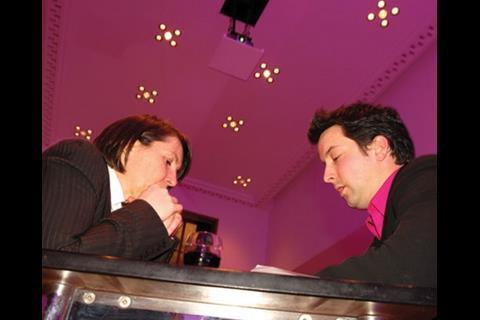 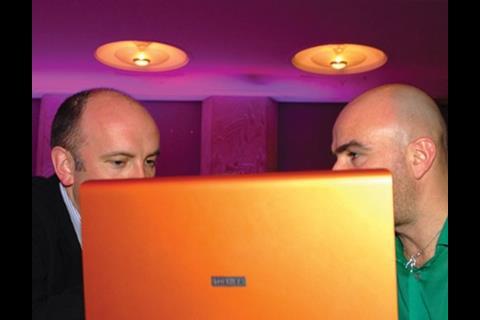 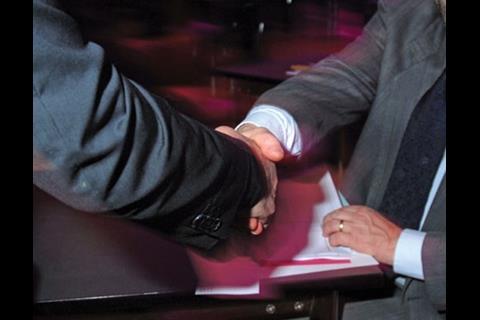 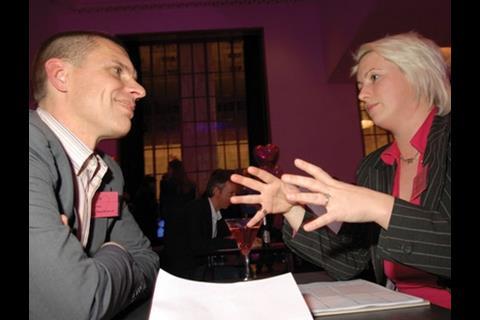 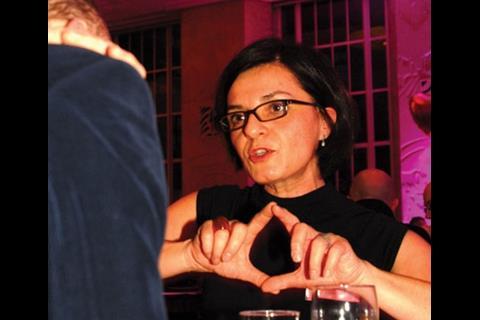 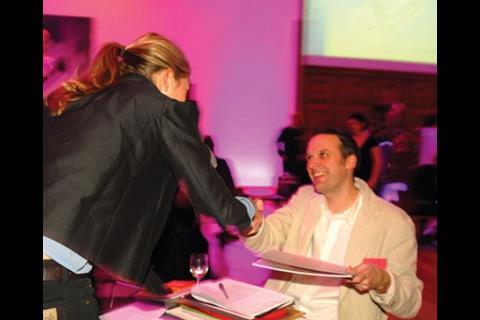 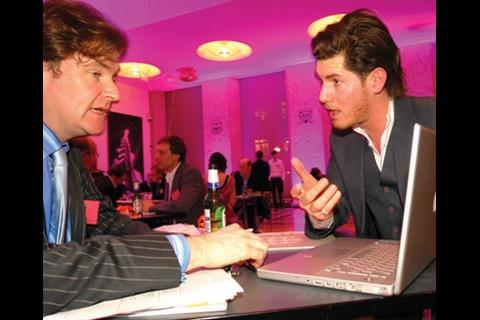 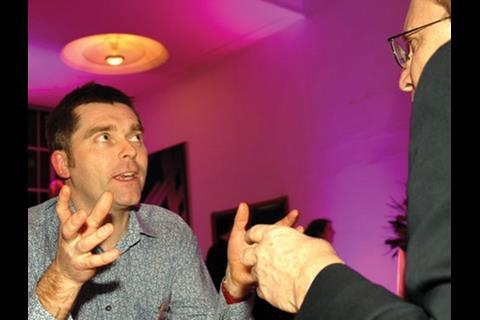 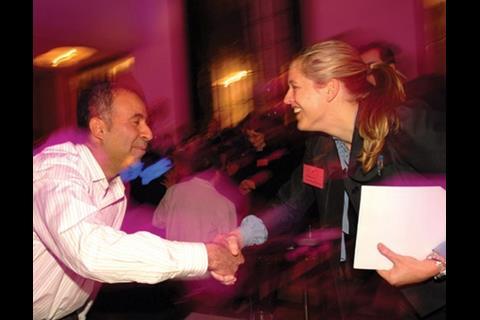 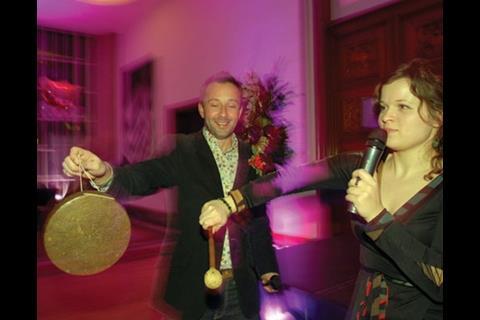 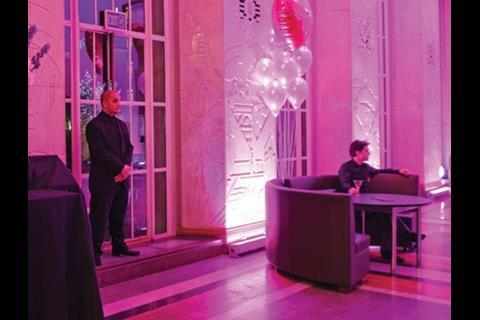 The RIBA went all out in Valentine’s week to give fledgling architecture practices a chance to seduce Olympic decision-makers. Katie Puckett went along to the speed-dating spectacular and found that romance isn’t dead

Barry White is rumbling seductively from the speakers. Amid pink lighting and heart-shaped balloons, guests dip strawberries into a chocolate fountain while waiters balance trays of Cosmopolitan cocktails. The day after Valentine’s Day, love is still very much in the air at the RIBA.

But lonely architects will be disappointed to discover that the institution isn’t making a foray into matchmaking. The RIBA has become the latest organisation to adopt the speed-dating format for a networking event, in this case giving smaller practices the chance to pitch their ideas to some of the bodies who’ll be commissioning the Olympics. Tonight, they’ve managed to persuade decision-takers from the Olympic Delivery Authority (ODA), Design for London, HOK Sport, Allies & Morrison and delivery partner CLM to spend three hours listening to quick-fire pitches. “We wanted to ensure commissioning bodies were aware of emerging architects and the range of talent out there,” explains Miranda Housden, head of RIBA London.

But why speed-dating? “There are so many architects and so little time,” she says. “And we wanted to have a fun event. People can get shy about networking. This is a fixed way to say what you want to say.”

The assembled architects know this is probably their only chance to meet some of the commissioning bodies for the Olympics. Hundreds of practices have pitched for the chance to take part, says Housden, but tonight’s 60 lucky participants all had an interest in east London and regeneration and many had won awards. Nobody is deluding themselves that a commission will come directly from the evening, but they are keen to improve their chances of picking up a smaller project on the site or legacy work. Each client will be given 30 five-minute presentations. The events starts at 6.30pm but the third and final round won’t kick off until after 10pm.

It’s a mostly male crowd, clutching a variety of portfolios, brochures, booklets and business cards. Julian Hakes, director of Hakes Associates, says he will be focusing on bridges – “there are 57 on the Olympic site”. He’s wearing a bright pink shirt (the picture at the top righthand corner of this page shows just how bright). It’s one of his favourites and used to belong to Jonathan Ross. He has prepared a small volume of previous bridge projects trimmed in the same bright pink and he has matching business cards – a nice touch.

Nearby, Landolt and Brown architect Adam Brown is sucking a mint and carrying a couple of larger presentation boards under his arm. His strategy, he says, is to “just get in there and tell them what we’re good at”. He denies he’s nervous. “There’s no time. You’ve only got five minutes, you’d be sunk.”

In the middle of the room are two rings of tables where the clients base themselves. The 20 architects in each round will take their turn at each of the chairs facing them.

As the first round is getting noisily under way, I join Design for London team member Mark Brearley (in the cream corduroy suit, above). His current suitor is Alison Brooks Architects’ Dominic McKenzie, who appears to be holding a box of Black Magic chocolates. “I thought I should turn up on a date with a nice gift,” he shouts over the din, opening the lid to reveal small project pictures. “What’s the biggest you’ve done?” asks Mark, squinting at the pictures. Dominic points to a largish looking scheme. “This is the biggest you’ve delivered?” asks Mark. “Well, we haven’t delivered it,” Dominic admits. Mark pushes him: “So how would you deliver it?” That floors Dominic for a second. “Um, it’s down to process,” he offers, before pointing to the Arcadia scheme in Cambridge, which has been completed.

You just have to get in there and tell them what you’re good at. There’s no time to be nervous. You’ve only got five minutes

The gong sounds, they swap business cards and it’s time for Dominic to move on to the next table. Mark seems impressed. “He was the most engaging so far,” he says.

Next in line is Christopher Bagot from London-based Softroom, who seems more nervous. “How’s it going so far … What do you do?” he begins. Mark explains: “I work for the mayor of London and we try to make sure Transport for London and the London Development Agency choose better designs.”

“It’s amazing how few architects here have had the chance to build in London,” says Christopher. “We did build an apartment block in Southwark.”

Mark interjects: “How big was that? I keep asking that because housebuilders always want to know about a practice’s capacity – that’s how they fend off a better practice in favour of a cheaper one.”

After a prompt from Mark, Christopher shows him some pictures – a swish lounge at Heathrow airport, an interior job at the Royal Albert Hall. He talks through each one slowly. “Go a bit faster,” Mark urges. But the gong goes and all he can do is flick quickly through the rest of the file before a farewell card swap.

The next few dates also make the mistake of chatting too much and showing too few pictures. Mark is happy to discuss Design for London’s role, but he wants to see projects and get a chance to gauge a practice’s capacity. He is not the toughest blind-date prospect – he often prompts the more nervous ones – and he says a bigger turn-off is “lack of earnestness”. He also criticises one date for being too “commercial”, ie, in it for the money.

Ali Mangera from Mangera Yvars has met Mark before. “You were on the judging panel of a competition I went in for,” he says. “Was I nice?” asks Mark. “No, but it doesn’t matter.” Ali breaks the golden date rule of not-talking-about-your-troubles by discussing his designs for a controversial Islamic centre in Abbey Mills, east London. However, he manages to smoothly move things on: “Apart from that, we’ve just won a competition in north Harrow for a community centre. We like to experiment with cladding.”

He rattles through several projects and the designs seem to impress Mark. “Have you tried for any public commissions?” he asks. Persuading smaller practices to go for open tenders is another of tonight’s themes, but Mark says he’s had little success to date.

Ali Mangera from Mangera Yvars has met Mark before. ‘You were on the judging panel of a competition I went in for,’ he says. ‘Was I nice?’ asks Mark. ‘No, but it doesn’t matter’

The last date of the session is Stephen Fitzwilliam from The Facility, who presents us with a chocolate Valentine’s gift tied up with a branded ribbon. “I’ve run out of leaflets but I do have business cards and I’m quite good at talking,” he says.

He’s an animated speaker, but confuses Mark by giving a detailed description of a competition win to redevelop railway arches. “So is it happening?” Mark finally breaks in. “No, it’s not. It was an ideas competition,” says Stephen, and proceeds to talk about an energy harvesting study with EDF Energy.

There’s little more than a minute left when Mark asks: “So what have you built then?” It transpires The Facility has built schools, homes and offices, but there’s no time left to talk about them. As Stephen leaves, Mark entreats him to send in information about his practice. “I haven’t seen anything yet,” he says.

The evening is in full swing, and the unusual setting has contributed to a relaxed networking atmosphere for those on the sidelines. The chocolate fountain is certainly a good ice-breaker.

Later, I catch up with Ali Mangera by the buffet. He’s not sure what good the event will do. “They all just tell you to look out for an OJEC notice and apply then,” he says.

All of the smaller practices say they don’t have the resources to enter the public tender process and believe they have little chance against the big names. “Nobody ever got fired for choosing Norman Foster,” one remarks. “OJEC notices strike fear into my heart.”

But Julian Hakes seems positive after his session. “It was very useful. We don’t always get the chance to meet people from the ODA or Thames Gateway. This was quite focused, so I got a lot out of it.”

He is pleased with his trick of folding a business card to show how a temporary bridge can be turned into a school roof after the Games. He hopes it will stick in potential clients’ minds when they find it later.

Compared with the usual tendering route, Julian believes that the speed-dating concept offers very good value. “If you imagine how much time and cost it takes a small practice to enter, it’s about £7,000-8,000 and your proposal might be in front of a panel for 30 seconds. Today, we had five minutes with 10 of these people on a one-to-one basis – that’s £70,000-80,000 worth.”

If you have any stories about pitches that went well/wrong let us know at building@cmpi.biz