Vince Cable: 'This industry could collapse' 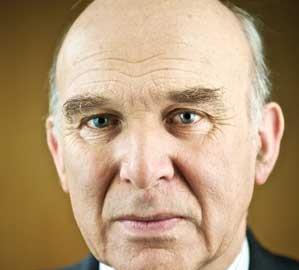 When the person who says this is Vince Cable, a man with a gift for eerily accurate economic predictions, you know things are serious

This is Vince Cable’s moment. It’s been a long time coming, but at 65, the Liberal Democrats’ deputy leader has arrived as an important player in the public arena. Indeed, he is tipped as Britain’s next chancellor in the event of a hung parliament.

And now that he’s finally here, Cable wants to make one thing clear: he’s staying. “I will continue to contribute what I hope are intelligent, helpful comments to the national debate,” he says, peering out from behind a desk piled high with papers and memos in his Westminster office. “We’re in a remarkable and largely unprecedented crisis of great severity now and this is just the beginning.”

Cable has been successful as a commentator on the financial crisis for the simple reason that he has got his predictions right (he pointed out that Northern Rock was as solid as a jelly way back in 2003). Then there is the fact that he knows his stuff: he’s a shrewd Yorkshireman with a degree in economics from Cambridge and 40 years of financial and political experience.

So when he says of the latest bank bailout that it’s a “blank cheque” that could leave taxpayers open to huge losses (as he did last week), you’re inclined to listen. And when he says of construction, “At the moment there is a danger that the industry could collapse”, it gives cause to shudder.

He goes on: “The government can’t continue to sit by and let construction disintegrate and housebuilding stop, which is basically what’s happening.”

So what should it do? “The main thing is that housing associations and councils should be stepping up to the plate. Land is at a discount, so this is the time for the public sector to initiate some serious building. And we also have to find a way for mortgage lending to resume on a more sensible basis and look to introduce uncomplicated, stakeholder-like low-risk mortgages, possibly with some kind of guarantee for the first five years.”

There are key problems thrown up by these answers – the first being section 106 agreements. Cable believes they no longer have a place in the system. “Section 106 means that when private housing stops, it drags social housing with it and, in the current context, it would be completely unrealistic to expect social housing to come through on the back of private development. That’s why I am urging the government to be much more proactive in getting social housing going and acquiring surplus property. When we get back to normal recovery we can look at whether section 106 is suitable. But in the recession I think it has become irrelevant.”

The second problem is the current leadership: “With intelligent, timely intervention the government could prevent this collapse, though I am not overly optimistic it has either the will or the competence to do this.”

He concedes that the government has made moves to address the problems affecting the housing industry, mostly by trying to get banks to offer mortgages again, but condemns them as half-hearted. “If it were me I would develop a properly instructed public investment programme, creating useful assets and employment in the short term. Sorting out social housing would be top of my list. This is the kind of thing Obama is doing and it’s what we need over here too.”

The government can’t continue to sit by and let construction disintegrate and housebuilding stop, which is basically what’s happening

Reeling off his list of proposed solutions while spinning from side to side on his desk chair, Cable seems relaxed, but he admits that his position as the UK’s most respected economic commentator sometimes makes him anxious.

“I worry about whether I’ve been fair to everyone. Clarity is the key to being a good communicator. You have to send out basic, essential messages. You can’t go into all the ifs and buts. But I’m conscious that when I strip things down I’m not stating a lot of necessary qualifications. I have been coming down quite hard on bankers, for example, without always being able to qualify my comments with very important details sometimes. But that’s a decision I’ve made and it’s what makes my comments refreshing.”

Refreshing – and usually accurate. Just how does he keep calling it right? “I just try to read everything I can and understand exactly what is happening before I say anything, because the financial system is complicated,” he says. “I’m trying to come up with solutions to give a message of hope that there is a way through.”

Cable is all too aware of how big a responsibility this is and that it is vital he doesn’t miss a trick. So it comes as little surprise that his parliamentary office runs like a well-oiled machine. “I saw an interesting article in the Telegraph today,” he says to his PA on his way out. “It was all about …”

“It’s already been copied for you,” she interrupts politely, falling into step beside him.

“And Newsnight?” “At five. They know you need to leave straight after and Nick’s [Clegg] comments are on your desk.”

Cable takes a sharp breath: “Newsnight. I am a bit nervous about that actually. I get on with Jeremy Paxman, but he can be pretty intimidating.” That’s one thing he’ll need to get used to if he does end up on the front bench next year.