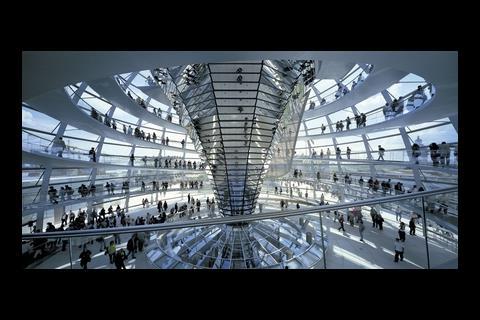 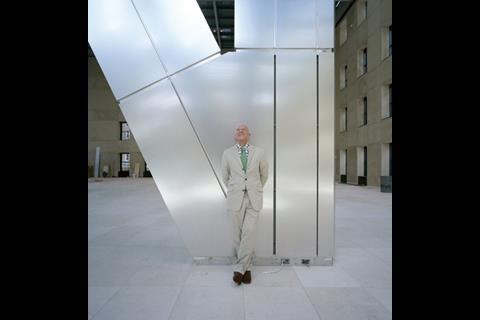 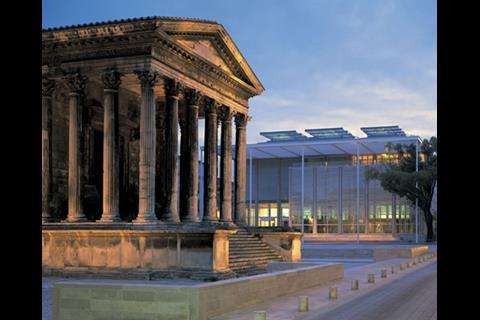 1993: The Carre d’Art, Foster’s modern temple of culture, set up a lively yet respectful dialogue with its 2,000-year-old Roman forebear in Nîmes 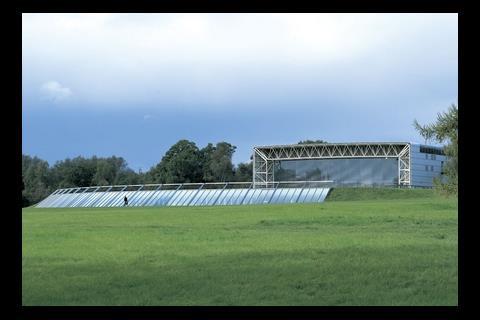 1978: The Sainsbury Centre devotes space and light to art by tucking everything else into a perimeter zone 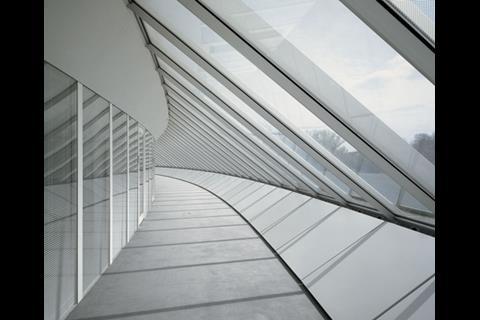 1991: A futuristic corridor sweeps round the centre’s underground extension 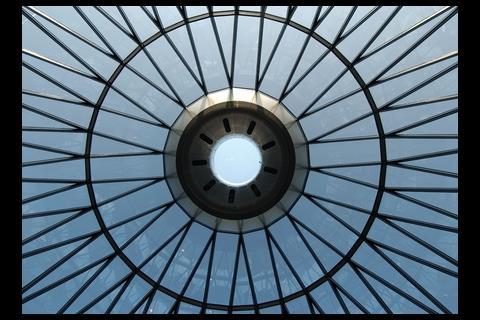 2004: The Swiss Re office tower peaks in a glass lens 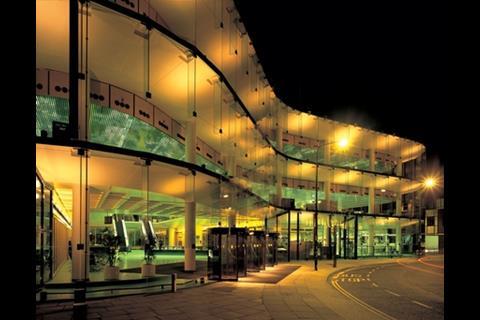 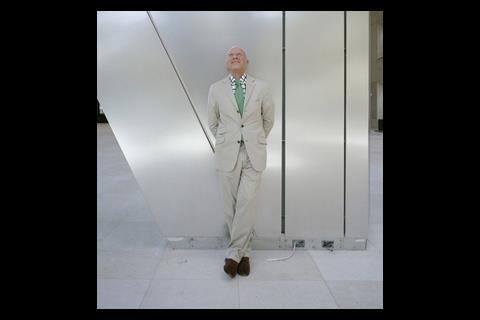 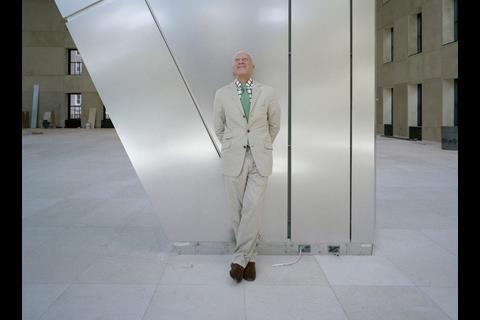 At 72, Norman Foster shows no signs of slowing up. He divides his time between almost every corner of the globe and is confident that the partial sale of his £350m practice to a private equity group was not only a good idea, but will free him up to do what he does best – design buildings. In a rare interview, Martin Spring catches up with him – just

Although it had been arranged weeks in advance, Building’s interview with Lord Foster is not carried out face to face at his riverfront office in Battersea, but by telephone to Switzerland. “I’m at my apartment in St Moritz in between trips,” he says breezily. “I’ve just come from Madrid; it will be Milan tomorrow, Beijing on Thursday and Friday and then St Petersburg. I thrive on all this travel: I love it.”

So he’s not about to retire then? “Absolutely not,” he snorts. In fact, this is his typical working week. He spends more time than ever travelling on business, which is hardly surprising as Foster + Partners is currently running projects in 25 countries. These include the £1.3bn redevelopment of a vast convent in Milan, a zero-energy regeneration scheme in St Petersburg, and Beijing’s new airport, which is to be delivered in time for next year’s Olympics.

Added to that, he puts more time and energy than ever into actual design. “All I can tell you is it’s never been more fantastic. Why would I stop doing the things I get so much pleasure and stimulation from?”

In a word, Foster has been liberated. Or as he puts it: “I am now more free creatively.” This new-found freedom stems from the restructuring that was kickstarted by the acrimonious departure of director

Ken Shuttleworth in 2003. It culminated last May, when Foster sold off a large, but undisclosed, chunk of his 90% shareholding in the practice.

The sell-off came in two parts. The first consisted of spreading ownership of the practice from four senior partners to the next rung of 10. “I am able to delegate a greater degree of management responsibility,” says Foster. “It has enabled certain individuals who are quite influential to become significantly more influential.” Among them he mentions Mouzhan Majidi, who was promoted to chief executive at the same time.

This part of the process will also involve a stock distribution scheme, dubbed “a warehouse of shares”. The idea is for top-performing staff to receive shares as bonuses, but this has not yet been set in motion. “That’s very important. It’s part of a plan for everybody to realise that there are long-term opportunities for them in the firm.”

But the second part of the restructuring was, by Foster’s own admission, more controversial. This was the decision, taken in May, to sell a minority stake to private equity firm 3i. Rumours abounded that staff were angered by the partial sell-off and the industry wondered whether more would join those who had opted for the exit door in the previous four years. But this is not borne out by the most high-profile of those departures. “There’s been no mass exodus,” says Shuttleworth, now of Make. “It all seems to have settled down since the sell-off.”

Foster himself remains convinced that it was a bold, and the correct, decision: “In architectural practices, it’s only been done when your back is against the wall. But we made that move at a point of extraordinary strength.”

He refers to the company’s latest published results, which reveal its highest-ever pre-tax profit – £5.9m for the year ending April 2006, up 136% from the previous year. He also points to the number of international design competition winners in the practice, which has jumped to 10 since January, twice as many as the previous record, set in 2003.

The practice’s website says that the aim is for 3i, through its international financial and management expertise, “to generate new opportunities for the practice, particularly by introducing it to new markets for large-scale infrastructure projects”. Foster will only add at this stage: “They’ve given us productive tips for some very significant projects. The main focus is India, but they’re still confidential.”

At this point, the conversation is interrupted by the patter of tiny feet and the rustle of paper. “Wow, fantastic,” exclaims Foster to the newcomer. He then explains on the telephone: “It’s my daughter, Paola. She’s done a drawing of four suns.”

If I had to pick one building that sums up Foster + Partners’ approach, it would be the Reichstag in Berlin

Foster’s more human side is sometimes glossed over, but John Sorrell, the chairman of Cabe, recalls an occasion when he showed a group of schoolchildren around the Great Court at the British Museum, which the practice transformed in 2000. “He was incredibly good with them, and they were absolutely and completely captivated by his explanations of the building. People see him as an extraordinary architect, but there’s a humanity there too.”

Foster also seems to takes an avuncular pleasure in the work of other architects. “It’s incredibly rewarding for me to be able to see somebody doing some of the things that I’ve actually done very well in the past but been able to encourage others to do as well and hopefully better. David Chipperfield, for instance. One gets a tremendous pride out of knowing somebody who has been through the company, made contributions to it and moved on to win the Stirling prize.”

Which brings us to last year’s Stirling winner, his former partner, Richard Rogers. It was the demise of their practice, Team 4, 40 years ago that led to both architects following their own separate glittering career paths – with both picking up life peerages en route. Although there is generally regarded to be a rivalry between the two, Foster says: “We are totally supportive of each other, and we have appeared together on platforms at the Houses of Lords and Commons. We have also been asked to give a joint presentation at the reopening of Paul Rudolph’s school of architecture at Yale next November. That’s where did our master’s degrees together.” Their practices are also working on neighbouring towers in the redevelopment of the World Trade Centre.

Of course, the 40th anniversary of the end of Team 4 coincides with the 40th birthday of Foster’s own practice, the celebrations for which will take place on 27 November at the British Museum. The general air of festivity extends to a pair of newly published books entitled Foster 40 Themes and Foster 40 Projects. The themes include such signature Foster motifs such as courtyards, curves, diagrids, sky gardens, sustainability and transparency. In the book’s introduction, he writes: “While the 40 themes are interesting individually, they are far more compelling when viewed as a whole.”

So how do we view Foster’s work as a whole? Sorrell, who as chairman of Cabe is the UK’s prime spokesman on architecture, is unequivocal in his assessment: “He’s been radical, he’s been global, he’s been authoritative, and he’s always willing to challenge orthodoxies to produce amazing new designs. Without any question, he’s now seen as one of the world’s greatest architects. He’s so renowned around the world, and that’s absolutely wonderful because the UK needs to be at the forefront of design.”

When you look at what leads to such effusive praise, several intertwined strands can be picked out. First, there is the all-embracing nature of his work, which spans the high culture of museums and art galleries, through the transport nodes of airports and rail stations to the everyday environments of offices, factories and schools. Foster himself sees sustainability as a key to this: “You can’t really look at sustainable development unless you’re taking a more holistic approach to design and looking at the broader issues of density, public transport and mixture of uses.”

Second, there is the daring way he innovates with technology, whether in building fabric, structures or passive environmental controls and sustainability. Then there is the relentless design logic that works up from first principles, yet often ends up by turning conventional building forms upside down. This is literally what happened at Stansted airport, where the bulky baggage handling and servicing were extracted from the passenger level and buried out sight into a deep undercroft.

In the hands of a lesser architect, all this could end in a flurry of CAD acrobatics. But the flipside of Foster’s design rationalisation is a process of distillation, which reduces all the disparate elements of a complex building into a clear-cut, deceptively simple, yet utterly radical form. The smoothly curving Swiss Re tower, for instance, has become the most iconic building on the London skyline, yet it encloses an ingenious system of spiralling sky gardens that double as vent shafts. And inside his buildings, the two core architectural elements of space and light always reign supreme. This is most obvious in the Sainsbury art centre of 1978, where the external envelope, structural frame, services, toilets and entrance lobbies have been neatly contained within a perimeter zone of constant width.

Finally, of course, there’s the unstoppable growth of the practice, the partial sell-off to 3i, and the way he determinedly breaks out of the boutique culture of signature architects. This is often questioned by fellow architects, but Sorrell sees it differently. “As well as being a creative designer, he’s an extremely good businessman, and developed a huge practice. This has enabled him to tackle enormous, grand-scaled projects such as whole city developments.”

Foster himself dislikes the mercenary line of the conversation when we discuss his business arrangements. “What drives the company is that we all get tremendous pleasure and stimulation from designing and from working with each other,” he says. “I really believe that business success follows on from that. It is fundamentally different from pursuing the bottom line on projects, which is very short-lived.”

Judging by the way he so eagerly anticipates his next foreign adventure and getting back to his creative roots, it is hard not to believe him.