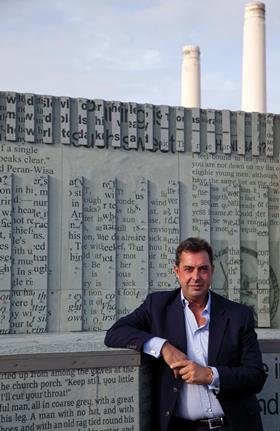 Rob Tincknell, the man in charge of Battersea Power Station

Can there be another building in the UK with such a troubled history as Battersea Power Station? For nearly three decades the decaying behemoth on the Thames in west London has sat dormant - a calm, largely unchanging giant, casting its gaze down over the many consultants, developers and investors who have scrabbled around its edges, come and gone, promising so much and delivering so little.

After so many dashed hopes and unrealised visions, the industry could have been forgiven a degree of wariness, if not outright scepticism, when it was announced that the power station had been sold, yet again, to new investors, following the collapse of previous owner REO’s plans for the site. However, somewhat counterintuitively, the new owners - a consortium of Malaysian investors - appear to be promising some reassuring continuity. REO’s £8bn masterplan for the site, which gained planning permission in 2010 and includes proposals for more than 3,400 homes, is to be retained. What’s more, the team that had been hired to deliver the project on behalf of REO has been re-engaged by the Malaysians under the leadership of Rob Tincknell.

Meeting Building on site earlier this month, Tincknell, a veteran of major mixed-use schemes in the UK, Ireland and China, oozes the kind of relaxed confidence and bonhomie that seems to be the calling card of big-name developers. Dressed in a sharp suit and open-necked shirt, he deploys a well-rehearsed stock of investor-friendly phrases: it’s a “fantastic project”, an “extraordinary opportunity” and his team is “passionate about this building and passionate about the site”, which will become “a brand new town centre that has depth, character and a level of authenticity that you just can’t get anywhere else”. In short, Battersea Power Station site will become “an absolutely fantastic place”.

The power station is the key to the whole project because it’s unique and iconic: it brings a level of brand recognition that money just can’t buy

Such epithets have, of course, been articulated many, many times before. So why should anybody suspend their disbelief this time around? Tincknell points to a variety of factors he believes make his plans for the power station truly deliverable. First, he claims that the extension of London Underground’s Northern Line to the site, as well as the wider Nine Elms development area, is now in the bag, with the government having declared it a national infrastructure project. “That means the government has to throw all its weight behind the project and has to make it happen,” says Tincknell, adding that Transport for London is preparing a planning application for the project that he expects to be submitted in March or April next year.

Second, Tincknell says the masterplan he commissioned New York-based architect Rafael Viñoly to prepare proposes sufficient density to make the scheme viable. Previous schemes, he says, simply could not meet the £203m contribution to the Northern Line extension, not to mention the cost of refurbishment works required on the power station itself, and still turn a profit.

“The planning consent is for 8.1 million ft2, which is twice the size of the previous planning consent,” says Tincknell. “There are some big bills to pay here, and we had to come up with a development that was big enough to support all those extra costs.” He says the fact that development is now under way on surrounding sites provides a level of confidence that hasn’t previously existed. Most importantly, he adds, the new owners “bring with them a huge level of financial stability, which is extremely important for a project of this scale”.

Tincknell says he has no plans to revisit the existing outline planning permission for the site and perhaps that shouldn’t be so surprising. He reveals that he had been in talks about investment opportunities with some elements of the Malaysian consortium before REO’s bankers withdrew their support, and that the consortium was the only bidder for the site that “really signed up to the philosophy of the existing scheme”. (The consortium, made up largely of two Malaysian developers, SP Setia and Sime Darby Property, outbid Chelsea Football Club, which had wanted to build a new 60,000-seater stadium south of the river.) What’s more, he says that the outline consent is sufficiently flexible to allow for a reasonable amount of change as the development progresses.

Another aspect of the existing permission and section 106 deal that has caused sceptics to wonder about the scheme’s viability is the fact that Tincknell is under obligation to begin restoration works on the power station at the same time as he begins work on the first phase of the surrounding development. The upfront cost of the power station works has been cited in the property press as a major headache for developers over the years. But Tincknell does not see it that way. “We’re happy to do that,” he says. “I don’t think any of our future residents want to be sitting in their living rooms while the entire power station is being refurbished.”

Tincknell adds that the very idea that the power station is a problem to be overcome is misguided. “Some of the press comments in the past - that the thing that hinders this project moving forward is the power station and the costs attached - are simply not true,” he says. “The power station is the key to the whole project because it’s unique and iconic: it brings a level of brand recognition that money just can’t buy.”

Moving on, Tincknell says he has a full consultancy team in place to deliver the 800-home first phase of the project, which he hopes will gain detailed planning permission by the end of the year. He adds that he will be going out to the market early in the new year to secure a main contractor for the first phase of the project and rejects any suggestion that he might seek a housebuilder partner for the largely residential phase. “We’re procuring the project ourselves and there are no discussions with any partner whatsoever at this stage,” he says. “Who knows what’s going to happen in the future. This is a very long project. But at this stage there is no ambition to bring in a partner at all.”

In terms of future contractors, however, Tincknell says he will be going out to the market through a traditional tendering process early in 2013. “What we’re looking for is a contractor we can work with in the long term, who can support the development and support the kind of timescales we’re looking at,” he says, adding that he hopes to start construction in September next year.

At the same time, Tincknell says he is already in the process of drawing up design briefs for the second phase of the project and says he hopes to select the design team for the second phase, which will need to include a retail specialist, early in the new year. The idea is to bring in a wide range of architects over the lifespan of the project. “We don’t want it all to be the same,” says Tincknell. “This is a town centre and like any town centre it needs to be a collection of interesting and intriguing quality architecture.”

All of this does sound like something might actually be about to happen at Battersea; something that will confound the sceptics and draw a line under 30 years of failure. Even breaking ground on the first of the planned apartment buildings would certainly buck the trend. For Tincknell, his faith in the project is bolstered by the fact that other developers have woken up to the potential of the area. “I think that the UK real estate industry missed Nine Elms, but people have now realised how central this bit of London is,” he says. “We’ve had the dawn of realisation about Nine Elms and we’re at the very centre of that.” 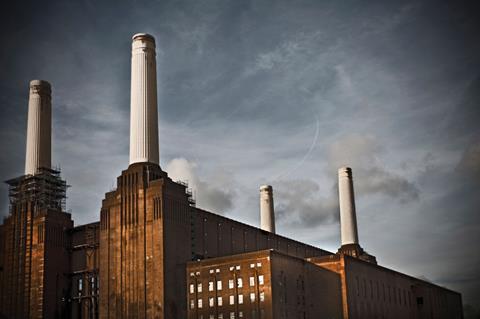 1935 Battersea’s A Station is completed, followed by its sister, the B Station, in 1953.
1980 Environment secretary Michael Heseltine awards the building grade-II listed status.
1983 Power generation at the plant ceases.
1986 Alton Towers’ proposal to turn the power station into a theme park wins planning permission.
1989 The theme park proposal is abandoned after costs escalate from £35m to £230m, leaving the power station without its roof and liable to flooding.
1993 The site is sold to Hong Kong-based Parkview International for £10m.
1997 Parkview’s masterplan for the power station receives outline planning permission.
2006 REO purchases the power station for £400m.
2010 REO wins outline planning permission for Rafael Viñoly’s mixed-use masterplan.
2011 REO’s scheme goes into administration with debts of more than £500m.
2012 The site is sold to a consortium made up of SP Setia, Sime Darby and the Employees’ Pension Fund of Malaysia for £400m.