A few of my favourite things

There are some good ideas coming out of the axe-wielding new management. One of the best is speeding up payments in the construction supply chain

On 6 May your biggest customer had a change of top management. “There’s no money left” said the note the departing chief secretary to the Treasury left for his successor. He was talking about your money.

If that had been my old Aunty Nell, she would have started buying margarine instead of butter, cancelled the daily newspaper, and cut out one night of bingo. Mr Gove axed £1bn worth of school building projects. Builders winced; plasterers shrugged.

These government wallahs are managing your affairs. You, sort of, vote them in to run what looks like a trust fund. They are the trustees. You, sort of, give them money and they promise to manage your money for your benefit. Ask any lawyer about being a trustee and hear the warning about badly managing the trust and becoming personally liable. No thanks.

What is impressive is the trustees’ idea of paying bills super-fast. The new managers of your money have promised to pay construction contractors, architects and engineers within 10 days. All you are asked to do is to promise to pay your supply chain in 14 days and press those folk to pay their suppliers in 19 days. 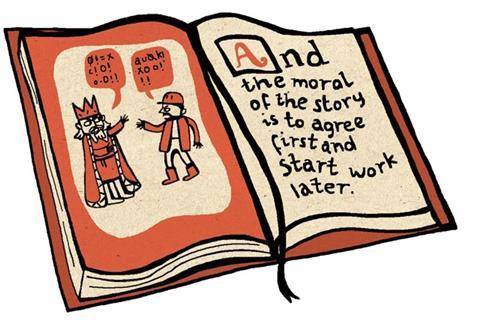 Impressive too is the enthusiasm about transparency in public procurement. True, it was all started in Europe, but our new managers are keen to use the rules to stamp out unfairness and (worse) shenanigans when you are bidding to public outfits. This year regulations have yet again improved the machinery. In short you are to know the tests by which your bid for construction work will be judged. And if there is unfairness, you can claim damages such as loss of profit. And bear in mind that if the government thinks this new system for bidding benefits the community as a whole, it could require the private sector to play by these rules one day. And there you have some idea of the burden of trustees … making choices for you about you.

One awkward choice this year has yet to be made. Has the Construction Industry Training Board had its day? The real people in construction, the plasterers, say it has. The minister is wrestling with the dilemma. We await the decision due last month.

Then there is the new improved Construction Act. The Housing Grants, Construction and Regeneration Act 1996, which gave us 28-day adjudication and new payment rules, is to give way to the Local Democracy, Economic Development and Construction Act, or ED’s Act as I’ve christened it.

ED’s Act is law but not yet in force. It awaits a device called The Scheme. Expected to become law 1 April. There are some unnecessary rules in the old act, money is being wasted. Do let’s get on with it.

In these years of high-speed dispute managing via the Construction Act, we have at last first-hand evidence from the adjudicators of what’s up with our industry. I have long suspected that Latham & Banwell and Egan and others were misled in branding us “extremely adversarial”. The evidence is that we are extremely partisan. Most differences of opinion are about the consequences of change orders or simply not knowing at the outset what is wanted. Then when the bills and time claims come in, folks become partisan and self-partisan too. There is the appearance of adversarial, unharmonious, mardy architects, project managers and constructors.

Truth is, they are acting in the interests of their client or employer, that’s all. Most disputes are differences of opinion because of a particular point of view. Hardly surprising that the adjudicator is a welcome release valve … and someone to blame for having gone this way or that about the money.

My favourite judgment this year, in January, involved Joe Galloway. He was managing director of the part of EDS blamed for causing BSkyB’s £709m building refurb loss. Cross-examination of Joe at the trial found he had obtained an MBA from Concordia College, St John in the US Virgin Islands. Great coincidence, said the barrister, because his close friend Lulu had won her MBA at the same sun-soaked uni. Snag was, no one could find the university on St John, even though Galloway had described his visits for lectures and exams. Lulu, by the way, was the barrister’s shaggy dog. The degree came with no more effort than a credit card payment. Galloway had well and truly misled the court. BSkyB won £270m in damages and £42m in costs.

Best wishes. Keep an eye on the trustees.