Adjudication: Use some judgement

Too many adjudicators are out of touch and, frankly, incompetent. Now a senior judge has stepped in with a suggestion on how to improve - he wants them to be more like him

The talk title was “Adjudicators - Acting Judicially?” given to the Adjudication Society in Scotland last month by senior Scottish judge, Lord Hamilton. Did you notice the question mark? And no wonder. Judges act judicially; arbitrators act judicially; but what’s all this about a mere referee in a brawl between two quantity surveyors, “acting judicially”? Yes, I know the device is called adjudication and yes the referee is called an adjudicator but the game is only a 28-day rummage, a sort of “do your best” to sort wheat from chaff. Well, says Lord Hamilton, since the decisions are of such practical importance to these construction parties, it is at least worth asking the question whether some of the constraints that apply to judges should not also apply to adjudicators.

In any case, despite parliament indicating in the Construction Act 1996 that adjudicator decisions were merely provisional in character, in reality and in practical terms the result is often final, conclusive, and definitive. Incidentally, if it is all done at remarkable, even break-neck speed, and if that points to a risk of injustice, the process demands a very high standard of expertise from adjudicators. Can you see which way the speaker is going? The job has come to require high-level skills and principles akin to the bench. The shout has gone up: “Limit the risk, get a highly competent adjudicator”.

Now then, “without suggesting for a moment that an adjudicator is a judge”, said Lord Hamilton, “I pose the question whether there might be a lesson or two to be learned from the judicial field in assisting adjudicators to discharge the responsibilities which rest upon them”. Note this by the way: the judicial field hasn’t itself had much written guidance on judicial conduct until recently. Judges met under a United Nations Human Rights Commission several times and eventually came up with a statement of principles. They are called “The Bangalore Principles” (because that was the final place of meeting). Scotland adopted them last year via this judge, Lord Hamilton, and he now offers them for consideration by adjudicators. Thank goodness he made the next point: “It is not
a disciplinary code - it does not set out peremptory rules; rather it offers guidance, which may assist judicial office holders in the conduct of their affairs”. Remember, Lord Hamilton merely asks if there is a lesson or two for us adjudicators.

In any case the general obligation of fairness must be the overarching feature. The speaker said he will leave on one side for the moment those aspects of procedural requirements such as natural justice, to concentrate on personal qualities. He looked at the quality of impartiality in the adjudicator. There should be no bias or personal interest.

Close to impartiality is the personal quality of independence, said the judge. Tactfully described as “extraneous influences”, he is talking about inducements, pressures, threats or other interference. It’s bullying and it’s big. It too is becoming recognised, talked about. Adjudicators are vexed.

The next value is integrity. Adjudicators have to wrestle with self-interest via that strand of thinking that requires them to ask some nasty questions. Integrity is that compartment in your mind hidden behind your eyes and ears, and the one that talks to your back pocket. The judge had the courage to go there. “In this context [of integrity] I would venture to mention the delicate matter of adjudicator’s fees”. Catch his drift? Watch out, you adjudicators on the gravy train.

“Competence and diligence” are the personal qualities now in focus. In short, judges have to improve; so too adjudicators. In truth, the position in adjudication is desperate. The judge is right. In 1998, we started this 28-day system. It worked so well. It was an architect, or QS adjudicator who looked and sniffed and decided the dispute. Look where we are now. We have gone judicial. The competence and diligence is lagging. To be blunt, there are an awful lot of adjudicators who have passed their sell-by-date, are out of touch, haven’t kept up. Worse, they don’t even know how incompetent they are. That reminds me, I must book in to the next Adjudication Society chat. As for the Rt Hon Lord Hamilton’s paper, thank you; well said. 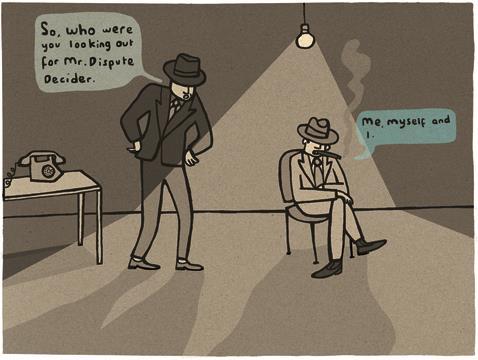