Do you remember me telling you about the case where the party that started the adjudication didn’t like the look of the ICE-appointed adjudicator, Mr Dixon? Then the ICE appointed Mr Howard Klein as replacement and they didn’t like the look of him either, so refused to serve the referral. Then the ICE appointed Mr Daniel Atkinson and the referring party liked him but the respondent didn’t. Mucky already, isn’t it? The case is Lanes Group Ltd vs Galliford Try Infrastructure. I told you last time that Lanes tried to stop Mr Atkinson by a court injunction. They said that Galliford was stuck with Mr Klein, ought to have served the referral, but had now run out of the 28 days. But Mr Justice Akenhead let Mr Atkinson carry on. Then there was another disaster.

While the court was deliberating about whether Mr Atkinson should stay or go, the adjudication clock kept ticking. No response had yet been served. Now came the disaster. The adjudicator issued what he called his “preliminary views and findings of fact”, based, oh dear, solely on the referral bundle. It was 35 pages, in favour of Galliford, of what looked and read like a formal decision. Lanes was furious because it had told the adjudicator its response was coming. So, by the time it did serve its defence, it looked for all the world that the adjudicator wouldn’t be able to make a climb down. He didn’t. That won’t do, said the next judge. The document gave the impression of pre-judgment. It looked as though Mr Atkinson had made up his mind without hearing both sides’ stories. The adjudication result is not enforceable on the grounds of bias.

While the court was deliberating about whether Mr Atkinson should stay or go, the adjudication clock kept ticking. No response had yet been served. Now came the disaster

This second judge was also asked to deal with a different argument about the idea of refusing to serve the referral. The first judge had hinted that this turn of events might amount to “an abuse of process” in any adjudication but said it wasn’t argued so he couldn’t deal with it. Anyway, Lanes brought that argument to the second judge.

The “start again” argument is important. The adjudication mechanism is (1) give a notice of adjudication, (2) call for the appointing body to nominate and (3) serve the “referral” case within seven days of the notice. Now then, there is many a slip between cup and lip. Some are accidents; some are deliberate. Sometimes the referral is “lost in the post”, or doesn’t arrive by day seven for some innocent reason. Sometimes there’s mischief afoot. Perhaps the nominated adjudicator is, in your book, an incompetent nincompoop (because he found against you previously). So you tactically breach the rule of having to serve the referral by day seven. Never mind, says you, we will take this opportunity to ask the nominating body to appoint someone else. It’s a deliberate manoeuvre. By the way, in Galliford’s case, it was a deliberate decision not to serve the referral but it fairly believed, in law, (wrongly it turns out), that Howard Klein was disqualified by the rules of bias. Focus instead on the “start again” idea when there is a deliberate decision not to press on. Simply put, you don’t want this particular adjudicator fellah. So you pull out. The key point is: can you start again?

It was argued in this latest Lanes vs Galliford Try case (and accepted by the judge) that the adjudicator has no jurisdiction until the referral is served. A search in the Construction Act for some sort of moment when the adjudicator’s the appointment actually begins gives no guidance. More likely, in my view, he is in place as soon as appointed. We know from previous cases that the referring party can elect to “discontinue” at any time. They begin at notice stage and elect to discontinue by not serving the referral. That’s their right. But the referring party’s discontinuance does not extinguish the adjudicator’s appointment. The discontinuance is an intention to no longer pursue the remedies claimed in the notice. So the case is not made out and the adjudicator makes his award on that basis. None of this is the same as some intervening event causing the referral to arrive late. Discontinuance is a deliberate act to abandon something started when the notice was served. And if you choose not to finish then the adjudicator must announce the result. The adjudicator is empowered, once he is contracted, to adjudicate. And if that happens before the referral arrives he is out of the blocks, up and running and must finish with an award. 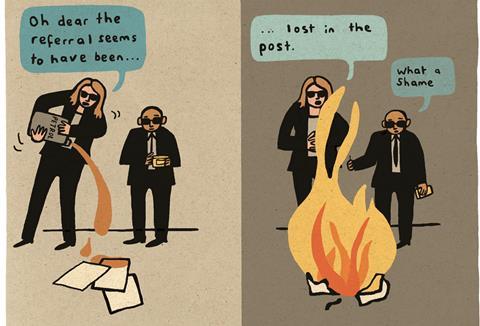