Theodora Dallas was caught out recently while being an adjudicator. And because of that she is banged up, in prison, for the next six months. Let me tell you that she only behaved in the way numerous construction contract adjudicators behave.

She “took the initiative” to find out what gives. Mind you she wasn’t appointed to adjudicate a construction contract, it was to adjudicate whether the bloke in the dock had done grievous bodily harm. Yes, she was on the jury. And her job was to adjudicate the facts. She wanted to know the meaning of grievous bodily harm, similar to a construction adjudicator wanting to know the meaning of concurrent causes in delays, or pain/gain in an NEC contract. So, she did a Google search for the meaning. No different to popping along to WHSmith bookstore and taking a peep at do-it-yourself NEC3. Anyway, while clicking the return key on her laptop for some help she happened to stumble on a newspaper report. Lo and behold, it revealed that the very bloke she had to adjudicate on was also looking out at her from the newspaper page, because he had previously faced an allegation of rape. So she told her fellow adjudicators … the other 11. And one of them told the judge. The judge was particularly peeved because he had told the 12 adjudicators not to “take the initiative to establish the facts and the law”. Don’t dabble on Google he said. He even told them of another lady adjudicator jury member three weeks before who discussed her deliberations on Facebook and got eight months gaol. These criminal case adjudicators seem hell bent on going on a frolic of their own.

I thought the adjudicator’s job was to decide the dispute on the case put. no googling, no whsmith. It was a stay out of gaol approach

Now then, when Miss Dallas comes out of the slammer she might have learned so much about being the adjudicator that she joins a panel of adjudicators of construction contracts. It will then be a mighty relief to her to know that the Construction Act for adjudicators expressly bars any disputing party from stopping her from “taking the initiative in ascertaining the facts and the law”. So that’s her get out of gaol free card.

Nor does the adjudicator in the case of Herbosch-Kier Marine vs Dover Harbour Board know what it’s about. This one is another ICE adjudicator appointment and has gone all wrong. The entire adjudication is set aside; money down the civils drain. What happened is this. The dispute was about the final account for Dover Harbour work or rather the clearing of a deliberately sunk ship. The final account included a claim for delay and all that usual stuff. Save and except that the two parties agreed on the methodology for calculating the claim but argued certain angles. But the adjudicator now took the initiative to establish the facts and methodology for himself. If he had used the method agreed by the parties it would have come to £492k award. His method came to £640k. Then other items he fathomed added more and more, a total of £350k too much.

Kindly the judge didn’t name this adjudicator, instead sympathised with his short timetable. The award is set aside not for mistakes but for whatever well-meant reason the adjudicator has gone off “on a frolic of his own” using a method of assessment which neither party argued. And I paused and said out-loud … But that’s what engineers do. And so do other adjudicators - and then go to gaol. 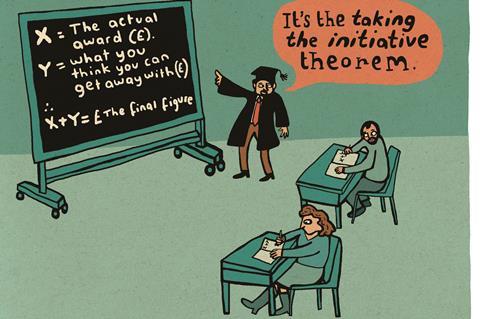