Choosing an adjudicator: Eleven against twelve

Would you agree to play if the other side had chosen the ref? Neither would this disgruntled architect …

Oh come on, London Borough of Camden, this foul is a red card jobby. Your “over a barrel” terms of trading contain silly rules when it comes to adjudication. And yet, folk such as architect Sprunt Limited take the deal on these daft terms. Camden’s service provider rules say that if there is a reference to adjudication,
the council shall be the adjudicator nominating body! It’s just as though in the Cup Final between Camden Academicals and Manchester City, Camden gets to choose its own ref.

It gets worse. Camden’s stuff also says that if the adjudicator orders Camden to pay up, then such payment “shall be suspended” until the 12th day of never, or by some other delay tactic. All this no doubt strikes you as a public body desperately trying to engender the spirit of mutual trust and co-operation.

Camden jumped up and down, telling the appointee that he had no jurisdiction because it was contractually written that Camden could choose the adjudicator

And in due course, there was a dispute between the architect and building consultant, Sprunt, and Camden. Sprunt sought additional consultancy fees. The correspondence went to and fro. By July last, Sprunt ran out of patience and called for an adjudicator. But it baulked at the idea of asking its opponent to choose who should decide the contest.

Sprunt went to the RICS; it appointed the middle man. Camden jumped up and down, telling the appointee that he had no jurisdiction because it was contractually written that Camden could choose the adjudicator. He gave that short shrift. By the way, for good measure Camden also ran the point that the contract with Sprunt was not in writing so no right to adjudicate arose. That didn’t wash either.

So the adjudicator got on with it and, yes, ordered Camden to pay a lump of cash to its consultant. Camden wouldn’t obey the ref, so Sprunt hauled Camden into court. The judge, Mr Justice Akenhead, said: “It is inherently unsound and contrary to policy for the contract to specify that one side should nominate the adjudicator.”
Construction contract adjudication is founded in statute and converted into contract with a firm rule that imposes a duty on the adjudicator to act impartially.

Impartiality in an adjudicator, or indeed an arbitrator or judge, is determined in two ways: the first being by reference to actual partiality or bias, and the other by reference to ostensible or apparent partiality or bias. Actual bias is a fact. Ostensible bias is by reference to an objective test: “Would a fair-minded and informed observer, having considered all the circumstances which have a bearing on the suggestion that the decision maker was biased, conclude that there was real possibility that he was biased?” Notice mere possibility: it is a low-level test.

The judge remarked that it would be perfectly possible for Camden to nominate an independent person as adjudicator. Then he said: “However, there is no obviously good reason why Camden retained to itself the right to nominate adjudicators other than to appoint someone who it believed might be sympathetic or unsympathetic to its position, even if wholly independent.

“Camden could nominate an adjudicator who is very expensive in relation to the amount in issue … to intimidate the other person from going to adjudication.”
He went on: “It would be difficult to dispel the real possibility that Camden had appointed what it thought was a ‘horse for the course’. In essence, Camden being a party to the construction contract in question lacks the necessary quality of independence in the nomination of an adjudicator.”

Camden’s solicitor was asked about the case and said it had “no comment”. As to whether it would retain these curious rules in its adjudication machinery, well, I asked twice, but this public body remained silent. Still, at least it can rest assured that if it keeps this machinery in its “over a barrel” contract, adjudicators will more than likely pay not the slightest attention. 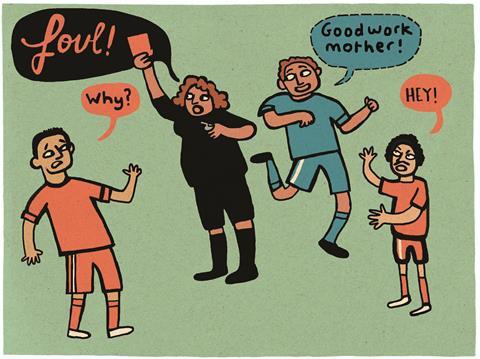