We are just two weeks away from Glasgow hosting the world’s biggest ever climate conference: COP26. It has been said that the 26th UN Climate Change Conference of the Parties is actually two summits: one for the politicians and negotiators to agree action to tackle rising global temperatures, the other for the tiers below where business leaders and policy-makers will congregate to puzzle over the practical issues of how to implement their plans.

Of course it can be, and has been, dismissed as a big talking shop – Greta Thunberg’s mocking “blah, blah, blah” – but exchanging ideas is exactly what construction needs to do to play its part in reducing greenhouse gas emissions.

The facts are that the UK has made a binding commitment to reduce carbon emissions to zero by 2050, and to get there the government has promised that by 2035 emissions will be cut by 78% compared with 1990 levels. These are massively ambitious targets, and let’s not forget that global carbon emissions are still rising. They are not impossible to reach, but only if we start to decarbonise our whole economy now.

Construction, as a carbon-intensive industry that accounts for 40% of global emissions, clearly has a central role to play. That is why we have dedicated much of this month’s magazine to your ideas, views and proposals for action.

In the process of compiling this edition, Gerry O’Brien of AKTII pointed us to a report that, though published in 2019, still has the power to shock. Called Absolute Zero, it is written by a research group called UK Fires made up of several UK universities and commissioned by the government.

It is full of wake-up calls. It forecasts, for example, that by 2029 all UK airports apart from Heathrow, Glasgow and Belfast will need to close. That’s not all. By 2049 all remaining airports will need to close too. On construction specifically the report points out that currently we have no substitutes at scale for carbon intensive materials such as cement or steel, but we know that by 2050 new conventional use will have to be phased out. The report’s authors see no alternative but to radically reduce the amount of material used in construction and to switch to retrofitting, reusing and adapting existing buildings. No wonder O’Brien highlights how vital resource efficiency is and will be in every aspect of life as we all “take the medicine coming to us from our excesses”.

> Also read: Ideas for how construction can help save the world

In the interests of keeping our spirits up – rather than dragging us all into a state of despair which will not get us anywhere – we can point to a couple of positive themes that come through in the views we have gathered from construction experts.

First, it is clear that the argument for radical action in the business world has been won. The net zero agenda is not about fringe eco-activism any more; governments and investors are on side and no business can afford to ignore it.

Secondly, the most motivated and informed companies are getting on with finding ways to cut as much carbon from our buildings as possible. While for decades hopes have been pinned on finding a wonder technology that can substitute our reliance on fossil fuels in one hit, there is a realisation that there is no time to wait for a perfect solution to arrive. Instead, we need to focus on the many actions that we already know will add up to making a huge difference.

In many ways construction is ahead of government. Who would have thought just a decade ago CEOs of major contractors would be calling for us to consider reusing structures instead of building new ones, or for whole life carbon assessments to be mandated, as ISG’s Paul Cossell and Sir Robert McAlpine’s Paul Hamer do?

There appears to be a growing consensus that government policy, incentives and regulation need to catch up with industry best practice, because while individual efforts are to be applauded, only a systemic approach can drive real change in the market.

Put in bald terms, without rules and mandates there will always be people and companies who put short-term profit before the long-term future of the planet. Cundall’s Simon Wyatt is right to call out the “greenwashing” that goes on in some parts of construction. Clients often hit up against how hard it is to reach net zero on projects, but the answer is not to massage the carbon calculations to look better on paper, but to build the lowest carbon building possible.

Cheats are nothing new, but their time is probably running out. There is growing pressure for more industry consistency and transparency. And while government legislation is long overdue, it will come. In the meantime, those firms that are waiting to do the right thing are losing out on big opportunities to transform their businesses for the new low carbon economy.

So what can you as an individual do in the face of a huge systemic problem? The message from all the opinions we have assembled is to lead by example, whatever your role or seniority. Seek out information, learn from other people’s success and failures, share your own wherever you can, get involved in collective efforts that take you beyond your firm or specialism and connect with different people and sectors of the industry. Above all, position yourself to be part of the solution and not the problem because the next 30 years represent our last chance to save the world. 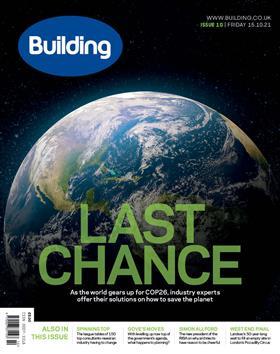 >> Read this month’s magazine for more on COP26, the net zero agend and much more

Building is launching a podcast series called Building Talks, and is dedicating the entire first series to the net zero carbon challenges confronting built environment professionals. The series will help you navigate through the complex issues and high-stakes debates as we talk to people at the forefront of finding solutions to the climate emergency.

The scale of the task ahead is daunting, but our guests refuse to give in to defeatism and instead they will present positive ideas that could, if adopted swiftly and at scale, affect real change.

Listen to the trailer in the player below, and subscribe to Building podcasts today on iTunes, Apple Podcast, Stitcher, Spotify or wherever you get your podcasts. The series starts on Monday 25 October.