Architects need to learn to express their role and the value of good design more clearly if the public and politicians, not just industry insiders, are to be won over, writes Sadie Morgan 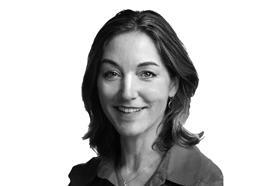 Like many of my fellow architects, I recently made the biennial pilgrimage to Venice to take in the extraordinary talent of our global contemporaries. The architecture biennale is an opportunity for architects from around the world to explore a given theme. This year it was curated by the brilliant Yvonne Farrell and Shelley McNamara, founders of Grafton Architects. Their title, Freespace, referred to the gifts that architects give for free, through good design.

Although most of those visiting the biennale have some connection to architecture, or at least an appreciation of it, I am amazed at how impenetrable many of the displays are. Often, unintelligible drawings combined with illegible texts made my brain fuddled, and I quickly moved on to look for something more understandable. It would seem that communicating complex ideas and concepts in a simple and engaging way is something architects struggle with.

After all those years, I realised that communicating clearly and understandably is the responsibility of the giver, not the receiver

There were, of course, some wonderful examples of how to communicate well, whether in the beautifully crafted models of Peter Zumthor, the simple diagrams and films of BIG, or the joyful simplicity of the Swiss pavilion.

So why do so many of us struggle to talk in a language that relates to our audience? Why is it so often the case that our buildings and projects are described in a foreign architectural language that’s impossible for most people to decipher?

Over the past 20 years I have sat through many architectural presentations, as a judge, critic or examiner. My level of panic used to rise in proportion to how prestigious the academic institution or practice in question was. I have vivid and painful memories of sitting through hours of presentations in which I had absolutely no idea what was being explained – complex problems and concepts, drawings that looked like spaghetti and texts that needed a dictionary to unravel led to mounting confusion, and the feeling throughout that it was my failing each time.

The quicker we realise that simple is not necessarily stupid, the quicker as an industry we will reconnect with the public

But then I thought – wouldn’t it help if these ideas were communicated more clearly? And in a stroke I realised that the emperor was indeed naked and I was the one fully clothed. After all those years, I realised that communicating clearly and understandably is the responsibility of the giver, not the receiver. In a world where we are bombarded by imagery and marketing, it’s up to architects to learn how to sell ourselves in a way that is understood to everyone else.

Yet I’m still amazed at how bad architects are at engaging with an audience, and at realising that we have to shape our message to suit others.

Would a developer prefer to know their building followed the Fibonacci principles or that it had a superb gross to net? It’s not rocket science that we have to tailor our arguments accordingly.

In my own career, I have often had to fight for the value of design in front of economists and politicians. Value to them is in metrics and votes, so design has to find a way of expressing its importance in terms that are relevant beyond simply colour and style. As Rem Koolhas put it recently: “Too many architects only talk to other architects that share the same views, and are becoming increasingly irrelevant as a result”.

So what is the solution? Well, first, we should value good communication, and try to learn from those in our profession who are good at it, because there are many fantastic writers and orators in the business, and many more who recognise its value.

Second, we should be willing to ask people from outside our industry to help us articulate our ideas, to make sure we’re writing or speaking in a language that is as clear and simple as it can be. The best buildings are an exercise in storytelling, and while architects may be the best qualified to communicate those stories in three dimensions, they might benefit from outside help in doing the same in written form. This was brought home to me most clearly when I asked my brother, a children’s author, to look though some of the building descriptions I had written and transform each into a compelling narrative that anyone could understand and appreciate.

Next, we as architects should try continuously to make our own relevance to society understood. I’ve found that articulating architects’ ability to solve problems and transform lives is a good place to start. So, too, is our role in creating better places to live and work through careful consideration of our human needs, combined with an intricate understanding of the environmental setting. Long ago I realised that my vocabulary would never match that of a politician or economist, yet ideas that relate to those things that everyone values will always appear fresh and interesting. And people want to hear them in a way they can relate to.

Perhaps it’s a lack of confidence that forces us to try to hide behind clever words, but the quicker we realise that simple is not necessarily stupid, the quicker as an industry we will reconnect with a public that sees us as overly precious, often arrogant experts who are preoccupied with trying to make projects that merely look good. Let’s remind everyone that, yes, our job is to make things look good, but not simply for the sake of it – it’s because it makes people feel good too. Good design, like good communication, connects back to people and place in a simple and relevant way.