The item of plant trundling across the railway level-crossing at Newark was a tall tractor with a whopping length of communication aerial poking straight up. It went straight up to the high voltage power line. Bang went the railway. The repair itself cost £4,800. Trains on that main East Coast line stopped for over four hours. Snag is that this hiccup on this ever-so-busy stretch of main line requires Network Rail to pay the franchised train companies just over £1m in compensation - calculated by fancy computer rigmarole in their franchise contract.

Bang went the railway. The repair itself cost £4,800. but This hiccup required Network Rail to pay the franchised train companies just over £1m in compensation

The second affair arose when a low-loader carrying a piling rig formed a short-term relationship with a lorry coming the opposite way on the railway bridge over the Yorkshire Trans-Pennine rail line. The parapet was neatly scythed out of its foundation and dropped on to the lines below. The repair was soon all done. But the rigmarole added £127,000 of compensation from Network Rail.

Network Rail obtained the repair costs from the defendants with no difficulty. The hiccup came in claiming for Network Rail’s losses - not to its property such as overhead lines or the brick walls, but in having to fork out to the train operators for their financial losses. At first, it struck me that there ought to be no fuss. It’s plain and obvious that the railway folk have to pay overtime to the driver and guard and other supporting cast. It may be that buses and taxis have to be called up. All this is small beer. The court heard, however, from a rail analyst that most of the revenue lost from poor performance is not suffered on the day in question. It is suffered in the future, as passengers affected by delays or cancellations (or indeed people who hear about experiences of delays and cancellations from others) are “less likely to travel by rail in the future”. That’s what makes for all this compensation. It’s the grumpy factor.

Seemingly, Network Rail employs 250 staff in the game of “delay attribution”. A person is appointed to investigate the cause of any loss of time over three minutes between London and wherever, then allocates the time loss to an incident. Then computer systems calculate the consequences and a little hand jumps out from the machine thrusting £20 notes (thousands of them) into the train operators’ hand - the grumpy hand. There’s more. The rail expert explained that more money is payable for disruption to the “incentive regime”. It appears that on some lines Network Rail dolls out cash to the franchisee when “the market is too weak to motivate the train operator to respond adequately to customer demands for a punctual and reliable train service”. Oh, come on, really?

Network Rail and the train companies have negotiated operating contracts, which include not only an incentive to train operators to do the job properly but also compensation when an incident occurs that might persuade people not to travel by rail. So, the claim against the outfits that exploded the overhead rail and pushed the parapet walls on to the lines include these whopping great heads of claim for notional loss.

Over the years there have been many claims for consequential loss arising out of negligent acts. The rule for compensation is to show:

The crucial element here is that the court is satisfied that if you knock a wall down and cause trains to stop, this kind of loss will be economic loss. The court isn’t interested in the particulars of the loss.

The Supreme Court ought to look at all this. It seems an awful long way to say that an incident which causes £5,000 of repair to overhead wires on the railway and shuts shop for four to five hours, dents the reputation of the railway so much that I decide to fly Easyjet instead. 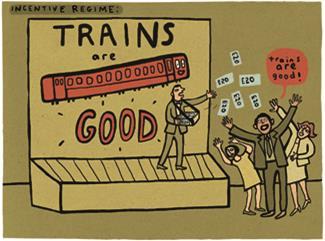