Cold War bunkers, the embarrassing largesse of HS2, a brutally cutting cabbie… and is that a Greek temple on the A14?

Nigel Hugill, chief executive of Urban & Civic, is showing reporters around one of his favourite buildings at Alconbury Weald, its development on an old RAF airfield in Cambridgeshire. This is not one of Urban & Civic’s smart new buildings. This is the Magic Mountain, a Cold War nuclear bunker which boasts a blast cap made of rubble and a gravel lower layer that would absorb a nuclear blast. Completed in 1988, it was never used in anger because almost as soon as it opened the Iron Curtain started to fall. It cost £58m to build. “That’s more than we paid for the site,” observes Hugill dryly. Given the concrete walls were built to withstand a nuclear blast, any plans to turn the grade II-listed bunker into, say, an educational or heritage attraction could be tricky.

The limits to lockdown

A guide brought along by the developer pointed out the bunker was intended to protect the site’s then military personnel, of course, rather than the local community. But in the event of Armageddon the vaporised locals might have the better hand. The bunker would only have been equipped with enough food and water for a month, after which the “lucky” survivors would have to venture out into whatever faced them. “After four weeks, I guess you’d either won or you’d lost,” reasoned the guide.

So now you know

I’m sure staff at HS2 Ltd were thanking the railway’s minister Andrew Stephenson for spilling the beans on how much they all earn. Turns out the 1,600-odd employees pick up an average of £60,000 a year. The news reminded me of the hoardings that encircle the site of the proposed station at Curzon Street in the middle of Birmingham. Emblazoned on them is the legend: “The benefits of HS2.”

Here’s a plug for Margate

To Margate, and more specifically the Turner Contemporary, for Building’s summer away day. Designed by David Chipperfield, the gallery has been the catalyst for the revival of the Kent seaside town since it opened in 2011, leading at one stage to it being dubbed Shoreditch-by-the Sea given the number of hipsters turning up. That’s all well and good but trying to find a plug in one of the rooms for hire proved an almost Herculean task for the Building gang. Tables and chairs were moved, doors to alarm systems opened, but no joy in this grown-up game of hide and seek. “What about these things on the floor?” someone said, eventually. It’s obvious when you know the answer, I guess.

A chat with a local cabbie turned to the concrete tower that greets everyone who gets to Margate by train. ‘Those arriving for the first time at Margate station often stare with disbelief,’ admitted the 20th Century Society

A chat with a local cabbie turned to the concrete tower that greets everyone who gets to Margate by train. “Those arriving for the first time at Margate station often stare [at it] with disbelief,” admitted the 20th Century Society when awarding it its building of the month two years ago. At 18 storeys, the 1964 block called Arlington House is viewed as a brutalist landmark. It has seen better days but the wave-like design on its sides intrigued one of my team, who told the driver he rather liked it. “It’s one of those buildings that looks better in the dark,” came the reply.

You had to be there

Architects Norman Foster and Frank Gehry were among those celebrating the recent opening of Gehry’s latest project at the Luma cultural complex in the south of France. Last month the country relaxed coronavirus restrictions allowing Luma founder Maja Hoffmann to send out 600 invitations for a gala dinner at Arles attended by dozens of arts world luminaries. It was one of those events where Vanity Fair was present and I was not.

It’s all Greek to me 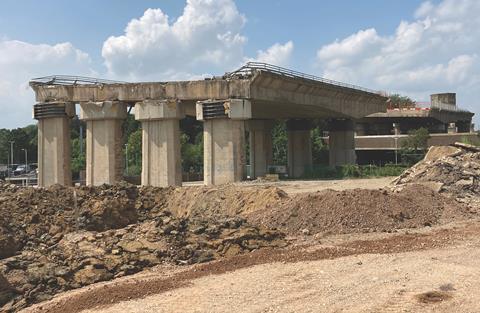 Now where in the world could this be? Looks can be deceiving and what appears to be a Greek temple is, in fact, the old A14 which once “flew” over Huntingdon station and is being taken down because it’s not needed any more thanks to the improvement works elsewhere on the road. I rather like it but, then, beauty is in the eye of the beholder.