The famous £6m mound of mud on Oxford Street is finally to be flattened – or is it? Plus, going for Gove

Farewell, then, the Marble Arch Mound, the 25m artificial hill cum tourist attraction made from piled earth that opened last summer on London’s Oxford Street in an effort to bring shoppers back to the West End after lockdown. Drawn up by Dutch architect MVRDV, it nearly doubled in budget, was panned for its spindly trees and general sense of dereliction and this month caused a furore when it emerged the man in charge of it was paid more than the chief executive of Westminster council who thought it up. The temporary structure, which reportedly cost £6m, is now being dismantled but the council revealed that nearly 250,000 people came to see it, proving, again, there’s no such thing as bad news. Mud, in this case, doesn’t stick.

Not yet over the hump

But, wait, a petition has been started to save it. According to the blurb on change.org, the mound has “become an icon to Londoners and tourists alike”. It adds: “This icon of modern London and celebration of life during the covid deconfinement period should be preserved and the many happy memories people have enjoyed on it should continue to take place. It must not be cut down in its prime especially in light of the money and joy already invested into it.” Who knew a heap of soil could arouse such strong opinions?

Michael Gove’s less than positive comments about the industry in the days before the 2010 election provoked one outraged reader to complain: ‘What a silly little upstart he is’

Not exactly a booster shot

If you were getting excited at the prospect of the pandemic ending this year, brace yourselves: King’s College London professor David Mosey has declared 2022 the “year of the framework”. It might surprise some to saddle the weeks-old new year with such a daunting label but, given he’s just authored a report into the procurement method, damning frameworks as costly and confusing, it’s not raised eyebrows with me. Mosey’s report said too much time and money had been wasted in the past by firms on “speculative” – in other words pointless – frameworks. Who’d a thunk it?

I’ll have what she’s having

How to become a partner at Foster + Partners? Asking for a friend who’s been reading about all these windfalls they’ve been getting at the practice. Last time, it was £31m and now, its latest report and accounts say, the 180 lucky souls are sharing another £9m. That works out at an average of £222,000 per partner during the period. As I say, asking for a friend.

We’ve been here before, of course. Former Building columnist Michael Gove tearing into developers and housebuilders last week brought back memories of his comments on Building Schools for the Future over a decade ago. As education secretary, he scrapped the initiative as soon as he walked through the front door after the Tories won power in 2010. He later reassured a conference on their alternative, free schools, that “we won’t be getting Richard Rogers to design your school, we won’t be getting any ‘award-winning’ architects to design it because no one in this room is here to make architects richer”. His less than positive comments about the industry in the days before the 2010 election also provoked one outraged reader to complain: “What a silly little upstart he is.” I suspect some housebuilding boardrooms might be thinking the same thing right now. Our reader suggested we ditch Gove as a columnist. I think it was the other way around, to be fair. For some reason, the lure of government proved rather more attractive than writing for us. Madness. 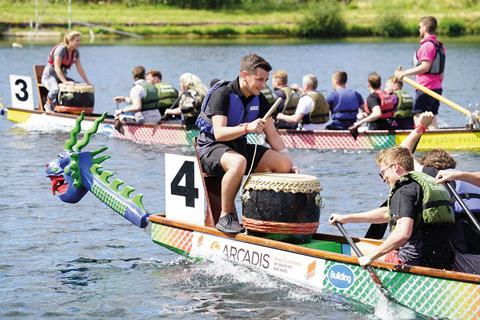 In a sign that we might finally be getting back to normal, construction charity CRASH’s annual dragon boat race is taking place again this year after a lockdown hiatus. Sponsored by Building, the event will run on 19 May at West Reservoir, north London. Forty teams will compete to be crowned Construction Industry Dragon Boat Champion 2022. We’ll be fielding a team, I’m sure, and to paraphrase Gary Lineker: “Dragon boat racing is a simple game. Teams splash across the water for 10 minutes and, in the end, Building always lose.” For your chance to compete visit crash.org.uk or click here.