Construction industry gossip: Playing all the right notes but…

This week, a slanted take on tall towers (not for the first time), the housing secretary is the bearer of bad news, the tale of a Thatcher comeback, and light at the end of the Crossrail tunnel

The housing secretary Robert Jenrick sent off a letter to the project team behind a scheme he’d turned down earlier this month in West Yorkshire. He had “carefully considered” the key planning issues at stake and decided Burley in Wharfedale didn’t need 500 extra homes after all. A shame, then, that less careful consideration was applied to other areas. Ministry officials managed to spell Wharfedale incorrectly 13 times over nine pages in its letter bearing the bad news.

The return of Thatcher

Some might have heard the story before but Sir Stuart Lipton tells my hack of a time he met former prime minister Margaret Thatcher. It was in 1985 to mark the start of the Broadgate complex he helped to develop in the City of London. As a documentary about the development aired on Channel 4 this week, he says he asked Thatcher to come back a year later to open the first buildings. “ ‘Of course,’ she said, ‘because you’ll never do it.’ One year later …”

From the ground up

At a Building Live Club event in London last week, Stirling prize winner David Mikhail from Mikhail Riches gave a glimpse into what goes into winning one of architecture’s highest honours. Mikhail, who this year won the award for the Norwich council housing scheme Goldsmith Street, revealed he had spent the morning of the Stirling judges’ site visit weeding garden beds and picking up crisp packets. I think that’s called mucking in.

At the same event, architect Eric Parry revealed how he won over planners for his project at 10 Fenchurch Street in the City. Parry said he took a Bavarian beer tankard into one of the planning meetings to demonstrate what he hoped would be the iridescence of the scheme’s white faience tiles. The industry turning some to drink. Who’d have thought?

Speaking of drink, beer and wine were flowing at Alinea’s sixth birthday bash at the Madison rooftop bar at One New Change in St Paul’s last week. Attendees included former City planning chief Peter Rees, Kevin Bundy, until the spring the man in charge of phase two of work at the Battersea Power Station redevelopment, and Mace’s construction COO Gareth Lewis. My hacks tell me they were sure soft drinks were available but they must have overlooked them, given their state the following morning.

A kind-hearted soul emails one of my team on the back of the news that Transport for London has begun discussions about where the missing £650m to finish Crossrail is coming from. Swap the lightbulbs to LEDs across the entire estate, says the message. “They would save billions of operational expenditure, thus having the additional money to pay for the scheme.” Simple.

Spencer McCarthy, boss of housebuilder Churchill Retirement Living, bedded down for the night outside the firm’s offices in Ringwood, Hampshire, earlier this month to highlight the issue of homelessness. Hoping to raise much-needed funds for End Youth Homelessness, one of the Churchill Foundation’s main charity partners in 2019, McCarthy and more than 50 of his colleagues slept on sheets of cardboard in subzero temperatures. They notched up an impressive £20,000 in donations. Well done all. 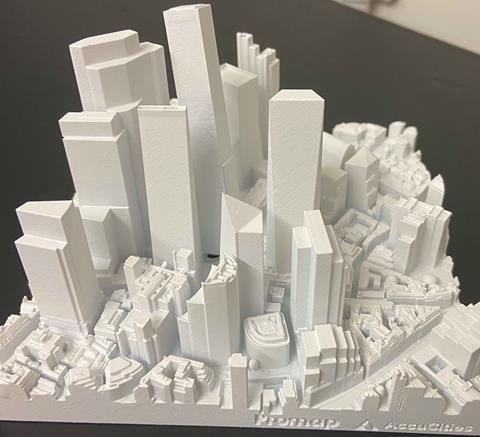 The leaning tower of London

A rather nice 3D model depicting part of the City of London arrived at Building this week. The towers represented included the Cheesegrater, 22 Bishopsgate and the Gherkin. Also there was Eric Parry’s planned 1 Undershaft, which will be the tallest block in the Square Mile if it gets built. Unfortunately, a bit of the model representing 1 Undershaft had snapped off. Is this a sign of things to come?