The relationship between housebuilders and the NHBC generally works well. But sometimes the home warranty provider can be a bit gung-ho - and go way over the top on costs

Mr Jackson is a housebuilder. His firm is called Jackson Developments. The NHBC registers his enterprise in category B1; that’s the highest category for builders. But the NHBC brought up the big guns and sued him for bad work. “The claim on any basis,” said the judge, “was exaggerated … I find that the [legal] costs sought are grossly disproportionate to the amount in issue and unreasonable in amount.” NHBC went home, tail between legs, tear in eye. Interesting to get an insight to NHBC machinery at this level.

Jackson Developments built four homes in Ross-on-Wye in 2002. One of the customers was Mrs Marsh. It has the 10-year NHBC Buildmark cover, a comfort for the housebuyer. The work is inspected by the NHBC during construction. It’s one of those relationships between inspector and builder that works well. These are folk who all know their housebuilding and it doesn’t take much to nudge the builder about this or that aspect of his work. A certificate is issued on completion; it is to identify any “exclusions” from the work covered. In the first two years of occupation all work within the insurance is covered for defects. The total cover, for varying scope, goes on for 10 years. Mrs Marsh spotted some defects and asked Mr Jackson to put them right. If the builder says no, or wriggles, or is dilatory, the customer recruits the NHBC to help. And if the coaxing doesn’t work, then the NHBC recruits another builder and pays him. It then holds its hands out to the housebuilder for the cost of its time. It sues the builder if it doesn’t pay up. That’s what happened here.

The builder said Mrs Marsh had asked him during the build to vary one or two things. He didn’t like the choice of doors but Mrs Marsh insisted. So the builder advised the NHBC inspector to itemise these as “exceptions” - outside the Buildmark insurance. By the time the doors took a turn for the worse nobody could find a record of the exceptions. The inspector by now had left for the moon; nobody could find him. This presents a difficulty for the NHBC. If the Buildmark certificate isn’t endorsed with the exceptions but the builder agreed exceptions with the NHBC orally, then the NHBC is left giving insurance cover to Mrs Marsh but can’t recover from the builder. Embarrassing.

The drama over all of these defects followed a familiar pattern. Meetings are invariably all about gawping at cracks and wobbly lines. The temperature rises. Mr Jackson reckoned that Mrs Marsh’s husband threatened to smack him on the nose. The second meeting was said to end in a scuffle and Mr Jackson accused the lady of the house of assault. The builder nevertheless said he would come back to do the defects provided the police were there to keep him safe. The NHBC decided to employ another builder. By now the bill for repairs came to £6,641.96. Yes, I know in terms of our industry disputes this is a tiddler but, oh dear, oh dear, a dispute in this consumer arena finds folk very dug in.

The judge entirely accepted the evidence of the builder that he had informed the missing NHBC inspector of exclusions. That meant that several of the items in the complaints list could not be claimed by the NHBC from the builder. The barrister for the NHBC argued that the rule that required exclusions to be written on the Buildmark certificate precluded the notion of oral acceptance of any exclusion. The reason is that subsequent purchasers of the house would be deprived of knowing what was outside the Buildmark insurance. The judge took the view that the NHBC could not rely on its own failure to endorse the certificate. Any second purchaser could look directly to the NHBC for correcting the defects excluded by the builder but the cost would be out of the NHBC’s pocket. Eventually the judge had to decide quarrels about a whole list of defects. Instead of recovering £6,641, the NHBC recovered £550 - after a two-day trial. That amounted to 8.5% of the amount claimed. As to costs, the NHBC spent £21,000, which is disproportionate, said the judge. Mr Jackson represented himself and may well have missed his true vocation as advocate instead of builder - the daywork rate for advocates is better. 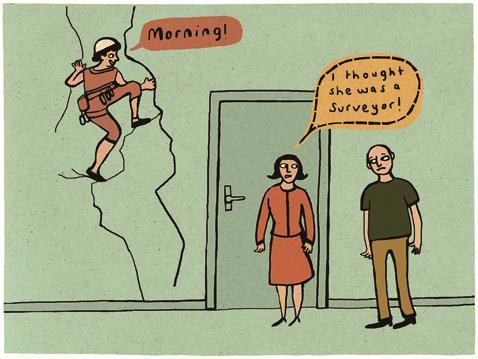