TV presenter Noel Edmonds learnt the hard way that if a deal’s not put in writing, it’s a no deal

At first I thought this was another episode in Noel Edmonds TV series Noel’s House Party. It ran for 169 shows until pulled in 1998. Do you remember it? Features included “The Gunge Tank”. There were “Gotcha Oscars” via practical jokes until the threat of legal action. And talking of legal action, Noel Edmonds has just had a humdinger of a construction dispute in our Technology and Construction Court. I reckon the heart of the affair is that Noel and his close pal, builder and developer Ulrik Lawson, fell into the trap of close friends not setting up their contract together in a pukka formal way. It’s what friends do.

Noel looked to his cooling friend to share the losses. That’s not the deal, said Ulrik. Yes it is, said Noel. Deal or no deal, there was no evidence save for a clash of testimony

Let me tell you what happened. Noel’s marriage ended in 2005. By then he had a swish estate in Devon, helipad and all. But the for sale board went up to fund the divorce settlement. His friends Ulrik Lawson and his wife provided emotional support. Then came a bright idea. Ulrik Lawson is a renovator of up-market properties - he also knows his way around planning applications. He spotted a grade-II listed mansion in a forced sale called Wood House. He reckoned it had development potential; some say possibly 25 houses. Noel Edmonds was also enthusiastic. He bought the place. Meanwhile, the two talked of a joint venture. Then they did what businessmen don’t do; they did nothing to record their deal; not a jot in writing. Do you see what I mean by friendship getting in the way?

Ulrik got stuck into planning applications, spent cash on consultants and a load of time talking with English Heritage about this development.

Meanwhile, the empty mansion was going down hill. Years were drifting by. Nothing was coming of it all. Both were forking out and sharing loan interest on the borrowed £1.6m. Noel’s feet got cold. He took the unilateral step to sell Wood House Estate. He now looked to his cooling friend to share the losses. That’s not the deal, said Ulrik. Yes it is, said Noel. Deal or no deal, there was no evidence save for a clash of testimony.

The friendship was going downhill. None of the deal was in writing. The judge said that trust was being eroded

That’s only half of the story. Having sold his home and helipad, Noel needed somewhere else to live. So in 2006 he purchased a run-down place called St Serf, in Exeter. It was to be his new family home. But I reckon Noel had his eye on St Serf as another business opportunity. His friend Ulrik comes into all this again. This house had to be renovated. Noel said that his friend agreed to oversee the project, organise materials and men, as well as do the QS work, architectural work, interior designer work himself for free. No, no, said Ulrik when he presented his bill for his 15 months of his work and time; worse still it was one of those jobs without drawings or specification. The friendship was going down hill. None of the deal was in writing. The judge said that trust was being eroded. Noel now wanted to scrutinise all the material and labour invoices. That’s what happens when friends cross the line from co-operation to conflict. The money due from Noel to Ulrik for the materials stopped. His business manager told Ulrik that Noel’s illness and consequent problems with work and cash-flow was all the subject of an insurance claim and payment would come in due course. Cross-examination in court revealed this as a lie, says the judge. The judge was also plain in his conclusion that Noel and Ulrik had not agreed that Ulrik would do all this work for nothing.

So now the judge had to fathom what Ulrik ought to be paid for all his efforts and his expenditure on labour and materials. What is the quantum merit for the works? Two QS experts gave their opinions. One suggestion was made that some expenditure was not attributable to this project. No real evidence of that, said the judge. He preferred the “meticulous investigation” by one of the two experts. He accepted that Ulrik was offering a one stop service to Noel, obviating the necessity for professionals such as an architect, designer, project manager. His time was payable plus procuring suppliers for which he loaded on an 8.5% total mark-up. The award was £683,512 less previously paid. The award of legal costs is yet to be made.

Some say another £800,000 turns on that topic. These people’s friendship got in the way of business common sense; put that in writing … with your next deal. 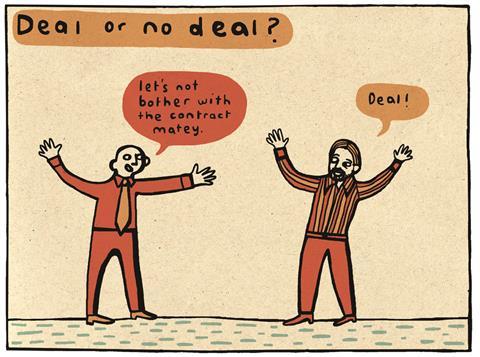