Is a judge qualified to price up a building job? Don’t quote me on this, but he might have a pretty good go

What’s the difference between “estimate” and “quotation”? It is another tiddler of a case. Up for debate upwards of only £30K. Small builder refurbishing the five bathrooms in the house, then hostilities broke out. Builder wants his money. Customer complains about defects. And hey-ho the warring parties not only go for trial in the County Court but also put even more (money) chips on the roulette table and come to the Court of Appeal. It is Sykes vs Packham (trading as Bathroom Specialist Contractors). The complaint in the three-man appeal court is that the judge in the trial didn’t know his onions about estimates and quotations; didn’t know his labels.

The Court of Appeal said there is no magic in the label ‘estimated’. You have to look instead at the context and language of the so-called estimate

“Pausing here” said Lord Justice Gross, “this litigation prompts a number of reflections. It concerns a domestic building contract, which in any view went badly awry”. Packham is a small builder, “honest, but unsophisticated”. Isn’t that a precisely apt description of our building industry: a myriad small, honest and unsophisticated blokes? Be honest, hardly any have a real clue about the so-called contract bumf. And as here, when and if they reach for the court, the court trembles and shudders. The judge has the job of managing the competing demands of saving expense, expedition and fairness of procedure. His watchword is proportionality. A £30K dispute will soon be trumped by a great deal more in legal costs.

The houseowner Mr Sykes said that the builder gave him a lump sum price. “No, no,” said the builder, “it was only an estimate and therefore cost plus”. The Court of Appeal considered the true nature of the agreement according to lawyers, if not builders. Mr Builder’s paperwork seeking the go-ahead said this is an estimate of cost, based on approximate materials and equipment costs and approximate labour costs. The price was £88,830 including VAT. The customer said: “Go”. There were extras of course. The customer told the judge that this is a lump sum contract plus the extra work. The builder told the judge that the idea of the estimate is to add up all those costs at the end of the day, add overheads and profit and get paid. It’s cost plus.

The judge wasn’t impressed with either case. The intention of the contract, he said, is to pay a reasonable price for the work carried out. That’s not cost plus. The Court of Appeal agreed. It said there is no magic in the label “estimated”. You have to look instead at the context and language of the so-called estimate. The customer hadn’t provided a complete specification for the bathrooms. It is implausible that a builder takes the risk of pricing for all and anything ultimately decided on by the customer and also by using “approximate” materials, labour, and equipment cost. The court took notice that these were ordinary domestic and unsophisticated builder folk (hooray) who were not able to deploy strict legal principles when getting into contract. In short, the use of the word estimate was neither here nor there. Look at the substance not the form.

Now there was another snag. At trial the judge announced that this was a “reasonable price” job. But nobody had put calculations in front of him for deciding a reasonable price. What should he now do? This is the sort of procedural dilemma that judges and arbitrators and adjudicators face when an unexpected turn is taken in dispute process. The County Court judge adopted a notion that all you adjudicators need reminding of from time to time. He told the parties that he would adopt a “rough justice” solution. He, in dialogue with the parties, there and then, worked out a fair and reasonable price. That is fascinating. A lifetime judge, donning the black cap of the QS. I love it. He looked at the wages bill for the whole job and knocked 20% off, to allow for time wasted by the builder. He then allowed the builder himself £175 per day expense. He allowed all the subcontract invoices. He allowed materials and equipment at cost, and then he allowed a 20% mark-up on subcontracts, 15% on materials, and 25% on wages. And do you know what the Court of Appeal said? Well apart from a few little niggles, they said well done. The “rough justice” by this judge was just what was appropriate and fair in this case. And on top of all that they agreed that the builder ought to be paid his legal costs by the customer. Look out for the substance, not the form. 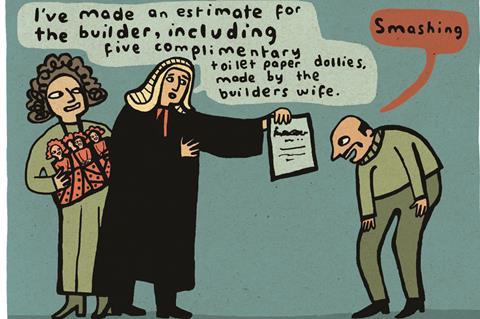