Galliford Try Rail began an adjudication against Lanes Group but didn’t like the look of the adjudicator appointed by the Institution of Civil Engineers. I first told you about this case in Building (29 July 2011). GTR refused to go on with the adjudication; it held on to the “referral” document and intentionally missed the last date for service. They then asked the ICE to appoint another person and were now content to press on. Mind you, they might have not approved of the second chap or next or next. Is this on?

You can ask for A.N.Other adjudicator provided you send another fee. Meanwhile the other party can say nothing to object to the appointee or to stop the referring party forum shopping

“Forum shopping is never attractive,” said the Court of Appeal, referring to this notion of one side trying to choose a favourable adjudicator. The lead judge, added: “My first view of this case was that GTR could not be permitted simply to drop the first adjudication and then adjudicate before a different adjudicator when it preferred.” But as the hearing went on the barrister for GTR began to persuade the court to come his way. Lanes was arguing that if the referral was not served on time, meaning within seven days of beginning the procedure, then the referring party had irretrievably lost the right to adjudicate. That entire loss is an unattractive sudden death notion.

At this point I would have thought that the Court of Appeal would find some good or bad reasons for refusing to go on with the adjudication. Strangely though it said it was against an “expensive factual investigation in order to determine whether the claimant had or had not lost the right adjudicate”.

The situation boils down to this: if you apply to a nominating body for the appointment of an adjudicator and it does so, it is open to you to refuse to go on with him.You can ask for A.N.Other provided you send another appointment fee. You can do this willy-nilly. Meanwhile the other party can say nothing to object to the appointee or to stop the referring party forum shopping. This can’t be right.

The second issue was the appeal against the first level judge having decided that the adjudicator (the replacement appointed by the ICE) was biased. Let me say at once he was not biased: the appeal was successful. The species of bias this time is called “pre-determination”. This happens when a judge or arbitrator or (in this case) adjudicator reaches a conclusion before he/she is in full possession of all the relevant evidence and arguments. Let me tell you what happened.

The adjudicator received the referral from GTR. He set a date for Lanes’ response. Meanwhile Lanes sought to stop him in his tracks because of the forum shopping affair. The date for the response slipped by. He then wrote an umpteen-page “preliminary view”. It was all based of course on one side’s story. His views were clothed in warnings that he was not making final decisions; merely preliminary views and he was open to hear arguments. He did get argument via Lanes’ eventual response but his final award hardly differed from the preliminary views.

The Court of Appeal had no difficulty with this and said: “There is nothing objectionable in a judge setting out his or her provisional views at an early stage of proceedings, so that the parties have an opportunity to correct any errors in the judge’s thinking or to concentrate on matters which appear to be influencing the judge. Of course, it is unacceptable if the judge reaches a final decision before he is in possession of all relevant evidence and arguments, which the parties wish to put before him. There is, however, a clear distinction between (a) reaching a final decision prematurely and (b) reaching a provisional view which is disclosed for the assistance of the parties.”

The test for bias is to put yourself in the position of the “fair-minded observer” who knows all the facts and circumstances. Those circumstances weighed by the Court of Appeal put adjudication in a different category to litigation or arbitration. Adjudication, said the court, is a “rough and ready process carried out at great speed”. “Vast masses of submissions and evidence have to be assimilated by the adjudicator in a short space of time. The adjudicator will fashion his procedure in whatever way enables him to discharge his onerous duties most swiftly, effectively and fairly.” Given these features, the court is reluctant to strike down adjudication decisions. But let me nudge you adjudicators not to send out preliminary or provisional views based on one side’s case only - know what I mean, my friends? 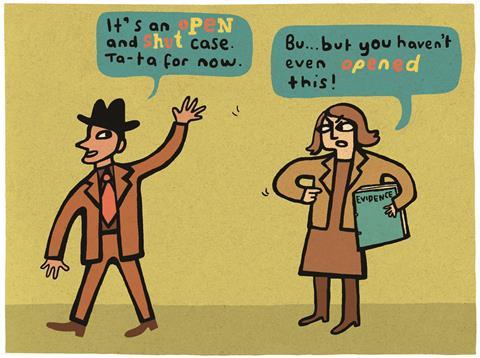