Hansom: For a better world

This week, women in construction stick the boot in, scientists harness the power of mushrooms for a more eco-friendly brick, lofty ideas for a new bridge get support and the words ‘coffee mug’ get a whole new meaning

She’s not particularly known for her efforts to bring communities together, but DUP leader Arlene Foster has lately endorsed Scottish architect Alan Dunlop’s suggestion that a bridge be built between Northern Ireland and Scotland. However, given that the cost would be about £20bn the odds of getting the project off the ground aren’t great. Earlier this year, the now ex-foreign secretary Boris Johnson proposed a bridge between England and France – a suggestion swiftly and unsurprisingly dismantled by Downing Street.

At the launch of the Federation of Master Builders’ proposals for a new builder licensing scheme at the House of Lords last week, one of my hacks found herself face to face with construction minister Richard Harrington. After happily agreeing to stop for a chat with lurking journalists, Harrington said he would only field questions about the FMB’s proposal. Fair enough, but there was just one small catch – he fessed up that he hadn’t actually read the thing. Not leaving anyone much to work with there, eh, Richard?

Top of the line

In Harrington’s defence, he did admit to only being asked to speak at the event the day before the launch. He kicked off his speech by saying: “It’s very difficult to get top-line political speakers to these events. I’m told if you wanted the prime minister it’s a three-year waiting list; if you wanted the chancellor it’s two years. So when I got the call yesterday morning I was pleased to accept the invitation to come and speak today.” He said he had discussed the proposals “in outline” with the FMB’s boss Brian Berry – he may not be “top-line political talent” but he could have at least taken a gander at them.

I discovered the other day that mushrooms could be working their magic to help regenerate Cleveland, one of the most run-down cities in the US. White-coated boffins have harnessed mycelium, the vegetative part of a fungus, and blended it with construction waste – which is in abundance in the Ohio city, what with all the demolition work going on there – in a process known as “bio-cycling”. The resulting “bricks” look like giant brownies, and yes, I’m sure there is a mushroom-related joke in there somewhere.

I’m indebted this week to social media for a witty assessment of the new Brexit minister. A colleague pointed me in the direction of Twitter, which was reacting – as is the way of these things – to Dominic Raab’s move to the role from the housing brief he’d occupied for a scant six months. A certain Leonardo Carella noted that an anagram of the new Brexit minister’s name was “midair bacon”, which he helpfully suggested was “quite apt for someone tasked with carrying out a policy that could only work when pigs fly”.

Fed up with going to building sites and finding no safety boots in smaller sizes, hacked-off Atkins surveyor Sophie Lydia Smith contacted safety footwear specialist Amblers with the idea of designing boots specifically for women working in construction. And lo, last month the brand launched the “AS601C Lydia safety boot”, which it says has a 200-joule impact and resistant toe cap. It will complement Smith’s previous design, the “FS706 Sophie shoe”. Smith says: “It’s imperative that women in construction take the lead to bring new solutions to problems which might prevent more women joining.” Hear, hear to that. 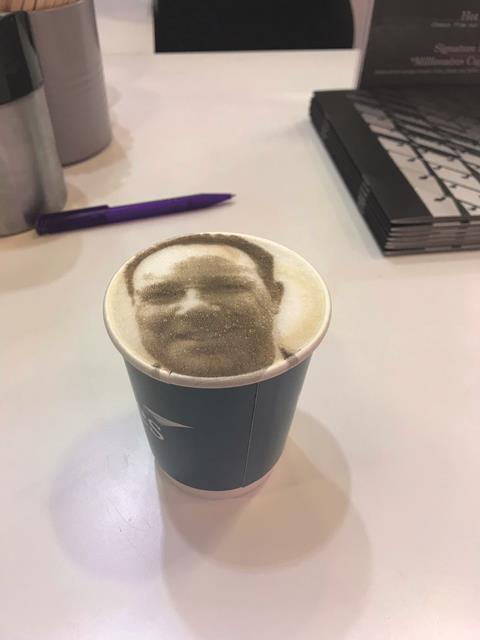 Here’s a selfie with a difference, courtesy of Wates’ Stephen Beechey. Coffee portraits are a thing these days (who knew?) and so Wates decided to invest in one of only two machines in the country that can replicate an image of one’s face onto one’s latte through the medium of cocoa powder. The innovation went down well, with attendees visiting Wates’ stand at the Local Government Association gathering in Birmingham last week. Some fans took to Twitter using the hashtag #faceoncoffee. Even Andrew Gwynne, shadow secretary for communities and local government, got in on the act with a picture of his dog (#Lottielattie). Good grief.

Correction: The first version of this story noted that Cleveland was the capital city in the state of Ohio. This was incorrect (the correct capital city is Columbus).