Hansom: Look at me!

It doesn’t take much to get Robert Care, the chief executive of Arup UK-MEA, going. The jocular Care was enthusing to one of my hacks last week about one of Arup’s newest technological innovations - roads that can charge electrical cars as they drive along them. Apparently the cutting edge technology, developed in conjunction with the University of Auckland, could be nearing reality. Care says he is in discussions with a handful of potential clients around the world about the scheme. “It’s a lot like Scalextric,” he grinned. What’s that about boys and their toys?

To err is official

The ONS hasn’t been having a great time of it recently. Last month the UK Statistics Authority said it will investigate the body over a mistake that forced it to re-issue construction statistics - with a vastly different outcome - within hours of their publication. Last week the ONS issued more gloomy figures, new orders data showing that contracts awarded have fallen by 23%, in the last quarter, the second big fall in a row. However, the claim that this took new orders to its lowest level since 1980 was another error. A closer look revealed the figures were actually the lowest on record - a mistake even I was able to pick up. Either someone is working the boffins at ONS too hard or someone needs a new calculator.

The art of scaffolding

Ever gazed out on your scaffolding and thought: “This just isn’t pretty enough”? Berlin-based design practice Beta Tank clearly has. News has reached my ears of a range of scaffolding accessories such as bird houses and plant pots, created to add some appeal to your poles. Or for precious metal enthusiasts, how about a set of limited edition porcelain scaffolding joints, each with a nut and bolt in either platinum or gold leaf? Perfect for the construction-inclined aesthete in your life, and a snip at just €200.

When Heron Tower developer Gerald Ronson blasted a City of London skyscraper as an “undistinguished piece of architecture” this week, I initially thought I was
witnessing an admission of guilt. Actually Ronson was bemoaning Brookfield’s plans for 100 Bishopsgate, which will apparently “obscure” views from Heron’s top-floor restaurant. The Heron itself has had mixed reviews, with our very own architectural critic describing it as a “huge let down”. The London skyline is already threatened by all manner of dubious culinary accessories, ranging from gherkins and cheesegraters to Foggo Associates’ “Can of Ham”. Is it time to add black pots and kettles to this illustrious list?

Getting a foot in the door

What does it take to become a Stirling Prize-nominated architect? Is it dazzling architectural flair? A deep understanding of materials, context, creative design and function? Fortunately manufacturer Geze can answer all these questions: a Geze automatic door! This week the firm proudly announced it supplied doors for five of this year’s six shortlisted buildings, including Hopkins Architect’s Olympic Velodrome. Who knew it was that simple?

Cheggers to the rescue

The housing market must be in pretty dire straits if it needs Keith Chegwin to help revive it. The former Naked Jungle presenter is the new face of a Miller Homes campaign and is set to deliver a £2,500 cash boost to a lucky house hunter when he accosts them at one of Miller’s developments nationwide. Hopefully the sage PR team will provide him with a better catchphrase than: “Wake up you beggars, here’s Cheggers”.

Miller Homes is hoping that the publicity exercise will be a knockout. Perhaps Cheggers could also be persuaded to rehash his 1982 single “I Wanna Be a Winner” to a more appropriate “I Wanna Be a First-time Buyer”. The public may need more than £2,500 though. 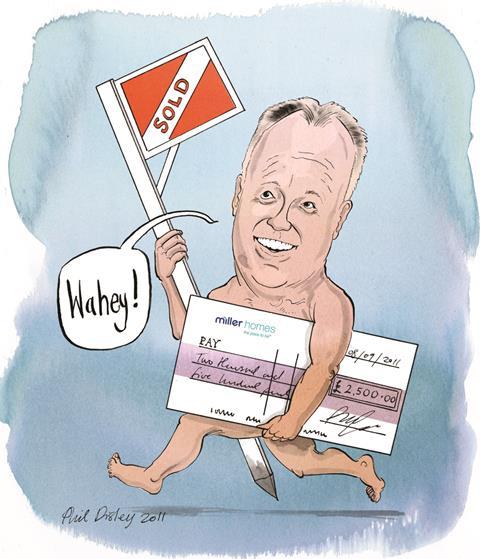