If the cap fits

A couple who tried to cap the costs in an oral ’cost plus’ contract have received short shrift from the Court of Appeal. Here’s why …

The deal with the builder was simple. The customer would pay cost of the works, plus 5%. But when Woodlands Oak sent in the final account, Mr and Mrs Conwell complained. They said the cost plus 5% idea was capped at £200,000 including VAT. Wow. The builder said he had never heard of it. Two quantity surveyors appeared in front of the Southampton county court judge in the five-day trial and agreed that cost plus 5% came to £293,757 plus VAT. The cap was a long way behind. Also a long way behind was convincing evidence of any cap at all.

Ah, but the Conwells hadn’t quite finished. They complained about the list of snagging - that by now they had got someone else to attend to. But the builder hadn’t been issued with any snagging list. Complaints too were made about duff underfloor heating. Then there was a problem or two with their roof.

The judge wrestled with all of these issues and eventually handed down his formal written judgment. It didn’t land smoothly. For some reason the judge wrote down that the agreement was cost, plus 1%. It wasn’t. Everyone had already agreed it was cost, plus 5%. Hey-ho, a slip. Then, it had been agreed that the roof repair required Mr and Mrs Conwell to vacate at a cost of £13,000, but the judge left that out. Mistake. Then, for good measure, it was said that by now the judge was biased. Then it was said he had wrongly failed to award the cost of the snagging. Then wrong to award interest on the £30K for the defective underfloor heating and same again on the £40K roof defects; wrong because no one had done that work yet, so no interest should apply. Phew! Do you see how this modest deal had gone ever so sour, ever so expensive and come to the Court of Appeal. The lead judge was Lord Justice May, and he knows his construction.

He gave short shrift to the bias point. Seemingly the county court judge gave “indications” of his thinking on various issues before the end of the trial. Counsel for the building contractor tried to argue that this was a procedural irregularity and so the whole judgment should be set aside and started again. The Court of Appeal wouldn’t wear any of that. The judge hadn’t shut out any argument. He took on board all written and oral submissions. This ground of appeal failed. The judge in the county court was trying to be helpful and shorten the time in court and expense. That makes sense.

There was a brave effort by the builder’s counsel in trying to persuade the Court of Appeal that despite both parties agreeing cost plus 5%, the judge fully intended to revise this to cost plus 1%. “I don’t accept these submissions, which I find entirely unpersuasive,” said Lord Justice May. That’s called a flea in your ear.

As to forgetting all about the £13,000 accommodation costs, it so happened that when the judge was told about this - after he handed down his judgment - he brought the award of £13,000 in. The builder argued that the judge was too late and had no power. “Unpersuasive,” said Lord Justice May again. Woodlands Oak was seeking to take advantage of a windfall error, he said. He wasn’t going to get a lawyer’s argument to defeat what was already agreed by the parties, because of a mistake by a judge.

Mr and Mrs Conwell got home on the roof and underfloor items. But they dropped a clanger on the snagging list. They never sent it to the builder. This was not a standard form building contract that had a “defects liability” clause. The county court judge said that by failing to notify the builder, the Conwells had failed to mitigate their loss. The Court of Appeal explained that it was not a must to mitigate, it was a may … may allow the builder back. So if the builder was a hopeless fellow, there was no duty to let him back. Here the judge thought it reasonable to let Woodlands Oak back. So the Conwells could not recover their snagging work costs.

The final point was the award of interest on the balance of cash due to the builder. The correct approach said the Court of Appeal is to award interest on the net amount due after setting off the counterclaim. 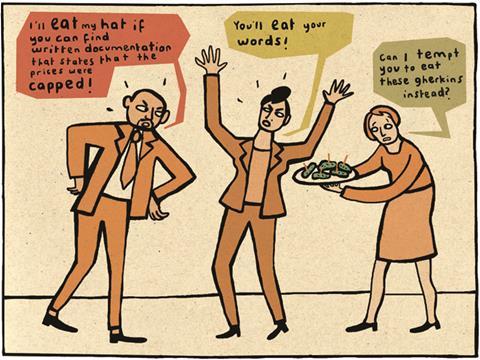