If you want my advice …

A couple of part-time developers were relying on their QS’ advice. The trouble is, he didn’t advise them about a specification error that made the project turn a loss

This time it is the quantity surveyor who landed in deep trouble. Mind you, he was acting as project manager too. The case is JJ Properties (Antrim) Ltd vs Durnien. Paul Durnien is a quantity surveyor of 20 years’ experience. He knew of a piece of land that was ideal for a housing project. Joseph McMullan is a hairdresser. John McKendry is a nutritional adviser. These two chaps do a bit of development in their spare time through their company J & J Properties. Twenty-eight houses would fit nicely on the old allotment. Moreover, there were one or two housing associations who were looking to invest in a design and build turnkey scheme. In other words, provided the price is right, it’s a ready-made piece of commercial good sense. J & J would pay to develop. The housing association then pays for the keys … all 28.

The architect and the QS got to work for J & J on the specification and likely out-turn costs. Exciting. The specification and bill of quantities was drummed out. Builders were invited to bid. The favourite bid was £1.285m. Add land £470,000. Add professional fees £135,000. Take that away from the amount the housing association was willing to pay and Bob’s your uncle … a profit. Still excited? Well, here comes the boob.

The specification that went in the BOQ tender document was an old - and now incorrect - civil spec. So there was a significant changer order and significant compensation to be paid to the builder

According to the developer, his consultant civil and structural engineer gave the QS budget costing and specification for the civil works for the site, together with the cost of piling works. It was about £365,000. But the specification that went in the BoQ tender document was an old - and now incorrect - civil spec. The builder’s bid included for that old spec. So when it came to getting the works done there was a significant change order and significant compensation to be paid to the builder. To make matters worse, the description of quantities of the works in the bills of quantity contained clangers. Flooring was under-measured. So too brickwork and plastering; drainage was measured but not according to the drawings at the time. You might see by now that once these additions were taken into account, plus the fact that none could be added to the housing association purchase price, J & J Properties were onto a loser, and not by just a few bob.

J & J eventually made a loss. Their inquiry lead them to the errors in the bill of quantities together with the non-inclusion of the correct civil and piling spec. So they sued the QS for their losses.

“I find the defendant’s evidence on this unconvincing and disingenuous,” said the judge, when it was explained by the QS that since the civil engineering and piling constituted only one element in a larger commercial deal, it was still open to the design team to later vary the specification, presumably in order to restore the project to profitability. Neither J & J nor the judge could see the force of that argument. The QS ought to have expressed his reservations about the viability of the contract in correspondence to J & J before getting into the building contract and a deal with the housing association.

The judge declared that the QS was the expert upon whom the developer relied. There was an implied duty under the contract to alert the developer in time to decide not to proceed with the building of these houses.

Probably this turn of events is enough to remind those who give advice and guidance how important the advice part of the job is. Joseph and John, hairdresser and nutritionist, are part-time investors in property. I doubt they knew anything about the business of building, never mind the business of forecasting the cost of a building adventure. So they look to architects, engineers, surveyors, lawyers and accountants to hold their risk-taking hand. I suspect the QS here meant well. It is ever so ordinary in building work to seek to recover the consequences of a mistake by altering the work as we go; look for savings. I bet that’s what was in this QS’ mind. If he had raised the specification error, the job wouldn’t have gone ahead. Nothing comes from nothing. The snag is, the QS was risking his client’s money without telling him. Not on. 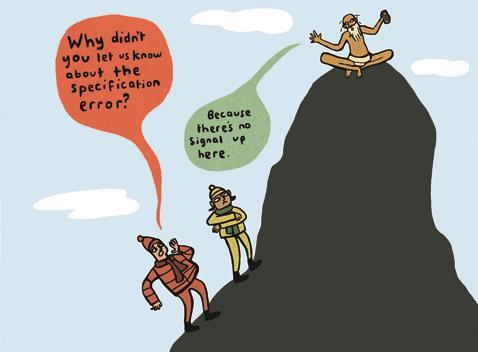